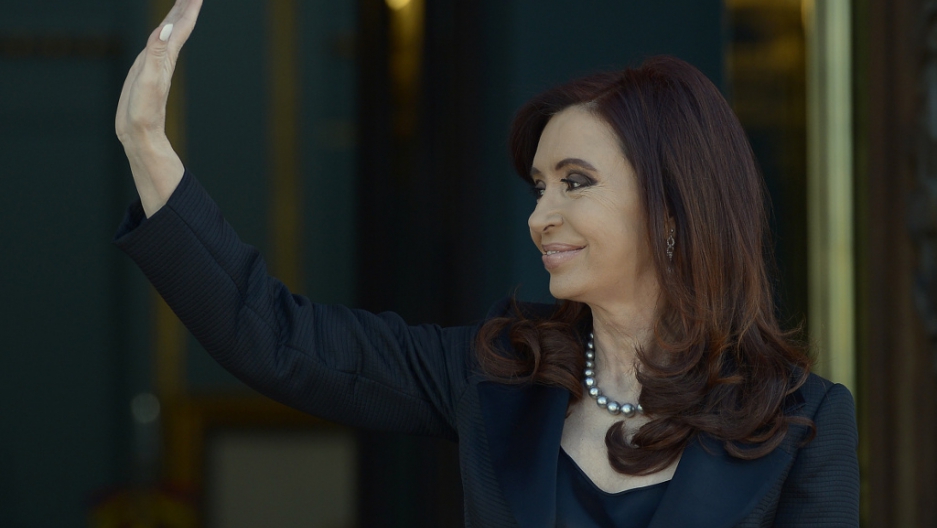 Argentine President Cristina Fernandez de Kirchner waves to people from the Government palace as she waits the arrival of Venezuelan President Nicolas Maduro in Buenos Aires on May 8, 2013.
Credit: Juan Mabromata
Share

LIMA, Peru — High heels and thick mascara may be the last things that spring to mind when talking about Latin America’s pantheon of authoritarian strongmen.

Yet for her opponents, the latest controversial move of Argentina’s immaculately made-up president, Cristina Fernandez de Kirchner, has cemented her place in the region’s ignoble tradition of autocratic leaders.

A major judicial shake-up will hand her ruling Peronist party control of the hiring and firing of judges, whose stubborn independence has repeatedly infuriated the democratically elected president.

Clarin is home to numerous journalists who have savaged the president over her concentration of power in her own hands and the corruption scandals that have plagued the governments of both Fernandez de Kirchner and her late husband, Nestor Kirchner, who was president from 2003 to 2007.

In the latest explosive accusations, Nestor Kirchner’s secretary this month spoke of how he had ordered the bribing of journalists and oversaw bags of cash being transported to the presidential ranch.

To add color to the allegations, an embarrassing video emerged revealing the late Kirchner’s fondness for safes, presumably stuffed with money.

“There is no doubt that democracy has taken a hit under this government. The judicial reform is just the latest issue,” Pablo Secchi, head of Poder Ciudadano, the Argentine branch of anti-corruption group Transparency International, told GlobalPost.

Leandro Querido, a University of Buenos Aires political science professor, agreed. But he also noted that there remained one major obstacle preventing Argentine democracy from collapsing.

“There are similarities with Venezuela but the big difference is the armed forces,” he said. “The Argentine military’s history of dictatorship, murder and disappearances means it cannot be a political actor now and is staying neutral rather than backing the government against the opposition, as is happening in Venezuela.”

A left-wing populist with a knack for confrontation, Fernandez de Kirchner has described the judicial reform as “democratizing” the justice system.

That claim rests on the proposal to make some candidates for the council that oversees the nation’s judges affiliate with political parties and run for election.

The bill also reduces the number of votes needed for the body to make decisions from two-thirds to a simple majority. Given that some members of the council are already appointed directly by the government while others are voted in by fellow lawyers and judges, the new system is expected to guarantee the Peronists control of the council.

“This reform would give Argentina’s ruling party an automatic majority on the council that oversees the judiciary, which seriously compromises judicial independence,” Jose Miguel Vivanco, Human Rights Watch’s Americas director, has warned.

The United Nations’ Special Rapporteur on the Independence of Judges, Gabriela Knaul, also opposed the measure, claiming that it undermines “rule of law” and leave the courts vulnerable to pressure from the executive.

The president’s response has been dismissive. On May 15, she tweeted: “How can it be that someone says that it is bad that 40 million Argentines vote instead of judges and lawyers voting?”

Separately, Fernandez de Kirchner has also introduced a bill to limit injunctions against the government to six months. With the Peronists controlling both chambers, the measures have almost finished sailing through congress.

Although many acknowledge that the justice system badly needs reforming, Fernandez de Kirchner’s critics believe this judicial shake-up is just the latest example of her intolerance of dissent.

Her government is now also attempting to nationalize the supply of paper used for newspapers, a move widely seen as an attempt to silence critical voices at Clarin and one of Argentina’s other leading papers, La Nacion.

In addition to judges and opposition media, the president has even targeted private economists, fining those who have dared to reveal that rampant inflation is, at around 25 percent, more than twice the official figure.

And earlier this year, Fernandez de Kirchner became involved in a bitter spat with Ricardo Darin, Argentina’s leading film actor and star of Oscar-winning "The Secret in Their Eyes," after he publicly accused her of launching a “witch hunt” of her opponents, and questioned how she had grown rich since taking office.

The president responded with a blizzard of tweets and a long public letter that were largely conciliatory in tone, until she reminded Darin that he had been the subject of a criminal investigation back in 1991 after being caught with a stolen vehicle. Darin subsequently pointed out that he had been cleared, and that, in fact, he had been the victim rather than the perpetrator of the fraud.

In a separate incident in April, Francisco Mujica, the octogenarian former left-wing guerrilla and current president of Uruguay — and, theoretically, an ally of Fernandez de Kirchner’s — was caught noting how negotiating with her was impossible, while also throwing in a gratuitous swipe at her late husband.

Unaware he was being recorded, Mujica was heard saying: “That old woman is worse than the one-eyed guy. The one-eyed guy was more political. She is stubborn.”

(Former President Kirchner had a lazy eye from a childhood illness.)

Fernandez de Kirchner laughed off the incident and Mujica issued a groveling apology. Yet the impression has stuck of a hard-headed leader disinclined to the give and take of democratic politics — and free speech — and whose legacy may be one of corruption and a dangerous power grab that weakens Argentine democracy.