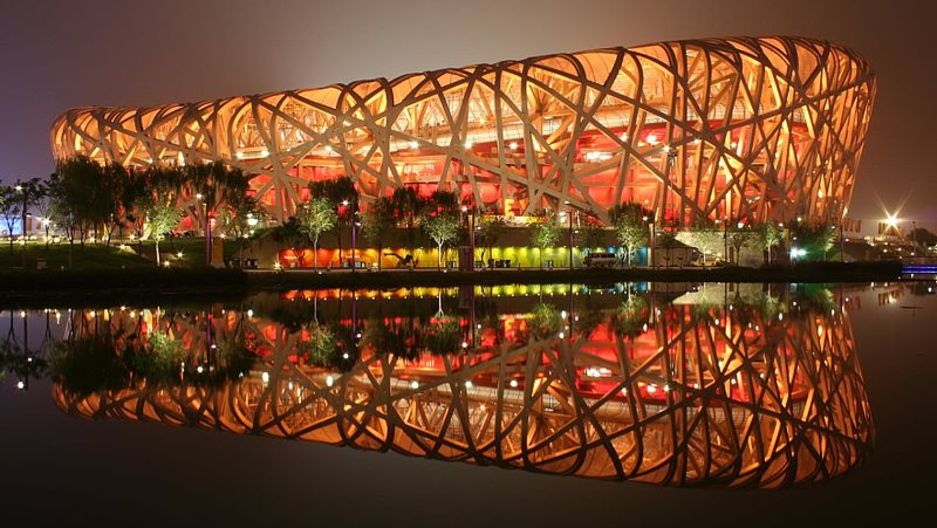 We're looking for the name of a famous Chinese landmark.

It's the big sports stadium in Beijing. The huge 80,000 seat venue is really an entertainment center.

It has hosted winter carnivals with tons of imported snow, outdoor operas including a performance of Turandot, and international soccer matches.

But it's most famous as the main venue for the 2008 Summer Olympics in Beijing.

And it's a bit curious looking. It was designed by a team made up of Swiss architects and international artists, including Chinese designer and political dissident, Ai Weiwei.

Ai's in the news again.

This video is a strongly worded protest of China's abuse of state power. That's a familiar theme for him.

He spent 81 days in detention back in 2011. And the new video includes a re-creation of the cell where he was held.

The song is called "Dumbass" in English, though that's apparently a tame translation. It's already been blocked online in China.

But Ai Weiwei says his video and the message will still get through: "My songs will certainly be blocked. Not just my songs, but my photograph and my name are all blocked. But that's no problem. Today we live in an age of advancing technology. Any blocking of information just shows that this kind of so-called sensitive information is information that China really needs. And it can't be blocked out."

Ai Weiwei admits the music doesn't sound that good. But he says he's trying very hard: "I'll keep doing it, and I hope one day to sing well."

Regardless of his singing ability, Ai Weiwei has already put his stamp on Beijing.

He was one of the creative forces behind the Beijing's landmark sports stadium we asked about.

The Bird's Nest is the answer to our the Geo Quiz.