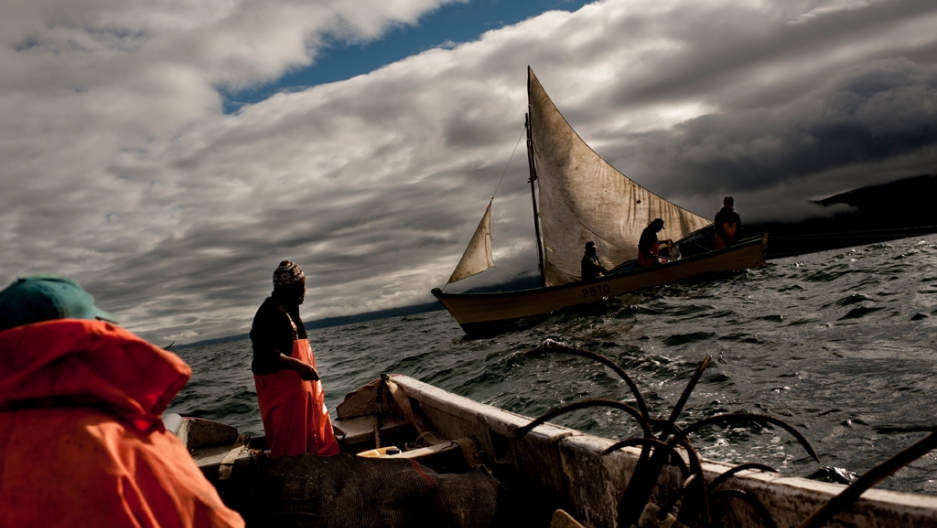 QUEULE, Chile — One beautiful morning in late spring, the ocean’s bounty had been especially plentiful, yet Luis Baez was in a foul mood.

At dawn, dozens of fishing boats under his stewardship returned from a midnight outing, heavy with silvery-grey fish called southern rays bream. With clear skies forecast for days ahead, crews might have readied for another trip, but with southern rays selling for just 75 cents per kilo, another excursion wasn’t worth the trouble.

“The majority of these boats aren’t even registered to catch southern rays,” explained Baez, who is president of the Queule artisan fishermen’s cooperative, a small village on Chile’s central coast. “But the government has to bite its tongue or this becomes a social issue, and all these men take to the streets.”

Last year, frustrations spilled into the streets as artisan fisherman burned tires and blocked roads in opposition to a congressional debate over a new fisheries law, which they saw as tantamount to privatizing the country’s most profitable fisheries for the benefit of few powerful business interests. Undeterred by the outraged fishermen, legislators forged ahead and approved the law in December, making notable improvements in fisheries management — including a ban on the destructive practice of bottom trawling, or clear-cutting, vulnerable marine ecosystems.

Critics fear the new law, which took effect in February, will negatively impact artisan fishermen by exacerbating longstanding issues within the industry, including the continuation of a divisive quota system through which corporations could feasibly hold sway over independent fishermen in perpetuity. At stake is a share of the world’s seventh-largest export market of fish products.

Lawmakers awarded 20-year renewable contracts to a small group of companies for the largest share of Chile’s main fisheries, which center-left Senator Ximena Rincon described as expropriating citizen sovereignty over the country’s fish and handing it to corporations.

“It isn’t legitimate to say to all Chileans. The only ones who can fish in Chile are three companies that live by fishing and taking advantage of resources of all Chileans for decades,” said Rincon, one of 11 senators whose attempt to stall the bill died in constitutional court.

The fisheries law could set the tone for future discussion on resource management, as similarly far-reaching contracts on natural resources have met with public outrage, notably on water distribution and lithium mining contracts.

In practical terms, however, the law has preserved a legacy whose roots can be traced to the early 1990s when Chile’s fisheries operated under a Total Allowable Catch system that promoted growth over sustainability.

This period, dubbed the “Olympic Race,” characterized by rapidly expanding commercial fleets out to capture as many fish as possible, was a conservation nightmare that could not last. By 2001, Congress passed an Individual Transferable Quota (ITQ) system, designed to reign in overfishing.

Under the ITQ system, all commercial fishermen were assigned a percentage of the allowable catch per year, but the system favored large-scale fishing operations, awarding them the majority of lucrative fisheries over artisan fishermen.

For the next decade, larger companies absorbed smaller ones, consolidating more than 90 percent of jack mackerel and a majority share of hake, into the hands of four conglomerates: Marfood, Orizon, Blumar and Camanchaca.

Despite the many advantages enjoyed by the industrial sector, declining fish stock has exacted a heavy toll on their massive operations, shrinking its collective fleet to less than 200 vessels, compared to an artisanal sector that has held steady at 13,000 boats. Additionally, as the industrial catch has shrunk, the artisan catch has grown little by little from less than 25 percent of the total catch a decade ago, to more than 50 percent today.

During negotiations over the fisheries law last year, industrial outfit Lota Protein joined forces with a large swath of the artisanal sector, launching an aggressive campaign to push for an auction system that would have opened the market to new competitors, a move supported by Chile’s pro-business President Sebastián Piñera.

The industrial sector responded to the challenge, claiming a historical right to its quota, but ultimately settled for a reduced share of jack mackerel and hake. The industry also agreed to auction 5 percent of its quota each of the next three years, ostensibly to foment outside competition. But with bidding open to all, artisan opposition argues that industrial heavyweights will simply outbid smaller competitors.

“It’s a hateful and false argument,” said Luis Felipe Moncada, general manager of Asipes, the industrial fishing association based in the central region of Bio Bio. “[With] more than 50 fishing companies in operation,” the biggest of them answerable to “more than 6,700 shareholders,” it could not be otherwise, Moncada said.

And yet, the recent admission by industry giant Corpesca to investigative news site CIPER Chile that the company gave the equivalent of $52,000 to government deputy Marta Isasi before she voted in favor of the fisheries law, has shed light on the inner workings of lobbying, and ignited calls for a revised law.

Beneath the vitriol the industrial and artisanal quotas are nearly indistinguishable. In the port city of Coelemu, a few hours north of Queule, industrial heavyweight Orizon relies on the largest class of artisan boat, measuring some 60 feet in length. The owners of vessels of this size have little choice but to answer to industrial demands, which has provided loans to artisan fishermen over the years to grow their operations. It’s a debt artisans have repaid in the currency of fish.

And because mega-conglomerate Orizon owns the only fish processing plant in town, even those who are not indebted to the company end up selling it their catch.

“The industry gets our entire quota without putting a boat in the water and without getting wet,” said Alvaro Reyes, owner and captain of the 60-foot Herminia. “They receive the product, process it and sell it internationally at a premium.”

Reyes got his start more than a decade ago in a 16-foot craft, netting hake and southern rays bream. Through personal savings and a five-year loan from a now-defunct industrial company, Reyes bought the Herminia, and after that a 40-foot vessel he christened Lario Abram. He paid off his loans with thousands of pounds of sardine and anchovy. Although he considers himself better off than most of his peers, Reyes harbors no illusions that he has achieved an even footing with Orizon.

“[Orizon] pays the most, I’m not disputing that,” Reyes said, “but finding a better price with another company isn’t really an option.”

In Queule, the industry exercises a distant, albeit deceptive influence. At local school, within eyeshot of the docks where tens of thousands of fish are unloaded every year, canned fish from Asia is served in place of local catch. This is the paradox of a country lacking an inclusive fisheries policy, said Patricio Olivares, president of the local artisan fishermen syndicate in Queule and an outspoken critic of Chile’s fisheries law.

“What this law intends is to disappear the artisanal sector,” Olivares said, his three-legged dog Rocky faithfully at his side. “As things are, artisan fishing is still profitable; the question is for how much longer.”

This is Part I of the series. Read Part II and Part III.