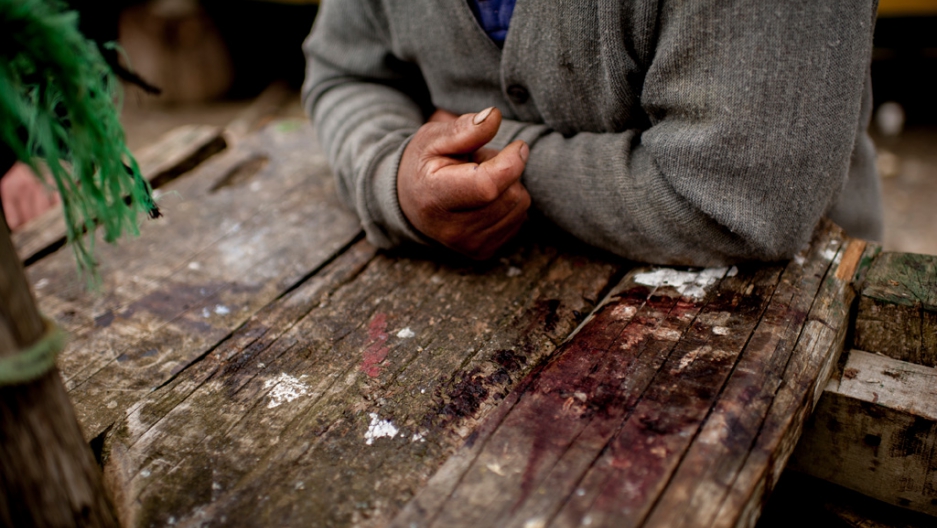 A bad morning for fishing in Bonifacio — an enclave of fishermen near Valdivia, Chile — nothing is on the filleting table.
Credit: Fernando Rodriguez Chancks
Share

PELLUHUE, Chile — Pablo Cesar Recabal skippered his father’s boat, The Eslora, past the five-mile point reserved for artisan fisherman to a distance where the Chilean coast becomes a blur on the surface of the water.

Reading his handheld electronic compass, Recabal calculated that at these coordinates, 10 miles out, his crew would find fish. A decade ago, when his father Frolian was in charge, rarely would he venture further than a few miles from shore. But those days are long gone.

“All artisan fisherman in this region fish between 12 and 15 miles out because there aren’t fish closer in,” Recabal said.

What Chilean law sets aside for about 85,000 small-scale fishermen is seldom enough to fill their nets, he explained. So the prospect of a 30-foot-long by 8-foot-wide boat bobbing atop daunting swells in the South Pacific is now a reality for many of Chile’s artisanal fishermen.

After decades of unchecked plunder, nearly all commercial fisheries in Chile are in a state of precipitous decline, especially the once-plentiful jack mackerel. In the mid-1990s, Chile’s fishermen netted 4.5 million tons of the emblematic fish, a rich source of Omega-3, processed here mainly as fishmeal. Last year the total haul had dropped to less than 300,000 tons.

“To give you an idea of the dimensions of 4.5 million tons of fish, I like to use its equivalent in cattle,” said Hugo Arancibia, professor of natural and oceanographic sciences at the University of Concepcion. “Let’s to try to imagine 11 million cows in all of the pasture land in all of Chile. They don’t fit.”

Although the plight of the jack mackerel has captured headlines, its troubled story is by no means unique. The health of most commercial fish stock in Chile is best described as catastrophic, said Arancibia. The latest government data on fisheries found that over 70 percent of species are overfished, including jack mackerel, hake, sea bass and anchovy.

One of the simplest methods for identifying a troubled fishery is to compare the average size of mature stock over a period of time. In the case of hake, the median length for mature stock has shrunk from 37 centimeters a decade ago to 28 centimeters today.

And while overfishing has undeniably contributed to the poor health of fish stock, scientists at the government-funded Institute for Promoting Fisheries (IFOP) say natural variations due to climactic variability have also had an impact.

Taken as a whole, the downward trend of fish stock in the South Pacific may well signal an alarming harbinger for global fisheries.

“It’s true there could be a global concern for the variation in fish stock in Chile and the region because what happens here has repercussions abroad,” said Jorge Toro De Ponte, executive director of IFOP. “Together with Peru, we provide close to 20 percent of the global fish production.”

Artisan fishermen are quick to lay blame for depleting fish stock at the doorstep of industrial fleets, and not without substantial evidence. In contrast to their artisan counterparts, large-scale commercial operations make use of massive trawling factory ships, unfettered by the natural or climactic limitations that slow artisans. But the industry is disinclined to shoulder the blame alone, citing lax supervision for enabling smaller boats to under-report their catch.

The permissive fisheries law that allowed for unbridled exploitation can be traced back to 1991 when fish were still abundant and promoting growth was prioritized over environmental concerns. During this period, the Total Allowable Catch system in place sparked a free-for-all, dubbed the “Olympic Race.” A frenetic arms race ensued, characterized by rapidly expanding fleets, racing to capture as many fish as possible before competitors had the chance.

But the onslaught would not last. By 2002, an Individual Transferable Quota system was in place and all commercial fishermen were assigned a share of a Total Allowable Catch per year, determined by the National Fisheries Council (NFC). The law awarded the largest percentage of the lucrative fisheries to large-scale operations, based on the historic bonanza of the mid-1990s.

Though limits were ostensibly grounded in science, and designed to reign in unsustainable fishing practices, the system did little to stabilize declining fisheries. Quota recommendations were derived from a combination of public and private research, including the corporate-funded Research Fisheries Institute, casting doubt on accountability and transparency.

Although the quota system has found success in other countries, powerful economic interests have hindered its effectiveness in Chile, according to Eduardo Tarifeño, a professor of marine biology at the University of Concepcion and a long-standing NFC member.

By design, members of the NFC were drawn from distinct backgrounds to provide a unique and rounded perspective on sustainable fisheries management. But too often socioeconomic and political factors influenced sensible decisions, with allowable catch limits set well beyond what could feasibly be captured.

Tarifeño described the economic rationale as, “if your share of what’s out there is 3 percent, naturally you want the total allowable catch to be as big as possible.”

The congressional debate on the fisheries law focused on how to distribute fish stock and for how long a period of time, while attention to environmental safeguards was largely obscured.

Still, notable protections were included in the final draft of the law, including closure of all seamounts to trawling, the requirement that all fisheries implement reduction plans for species captured incidentally, and for the first time a requirement to set aside 1 percent of caught fish for human consumption.

“I think we have one last chance to stop the collapse of the main fisheries,” said Alex Muñoz, vice president of the environmental group Oceana in South America. "I don't think this will solve the problem on its own, but we now have enough legislative tools to ask for solutions to rebuild the fisheries."

Not everyone shares Muñoz’s hopeful outlook. Beyond the squabbling over distribution, critics of the new fisheries law, which took effect in February, say it offers little promise of curbing the influence of powerful business interests or healing ailing fisheries.

The new law counts on nearly a dozen government-appointed scientific committees to set Total Allowable Catch, but these unpaid committees are every bit as susceptible to manipulation as their NFC predecessors, according to Albert Arias Arthur, a US-based fisheries policy consultant.

“What we have again is a vulnerable middleman who is going to do whatever the big guys want,” said Arthur, who counts Chilean businesses among his clients. “It’s just a different pocket on the same pair of pants.”

Aside from the technical aspects of the fisheries law, Tarifeño added, the government made a crucial flaw in emphasizing sustainability over conservation. From a biological point of view, he concludes, recovery is unlikely.

“If we really want to save the resource we should stop fishing it,” Tarifeño said. “Obviously that would have an economic consequence, but if there aren’t any fish, there will still be a crisis.”

Set against an uncertain future at sea, competition among would-be fisherman continues to be fierce and survival requires an ability to adapt to shifting realities, the skipper Recabal says.

This includes a change to net fishing. Years ago, before fish stock began dropping off, 90 percent of hake was caught using sardine or anchovy as bait. But as the price of bait climbed, many artisans traded in their hooks for nets, a significantly less discerning method.

By late morning, the beach was populated by artisan fishermen, busy filling 30-kilo trays with hake and discarding tiny crabs into a plastic barrel. As the barrel filled with crabs, Recabal defended the use of nets as perfectly sustainable. “Besides,” he added, “we have to buy bait from the industrial companies. It’s really expensive.”

This is Part II of the series. Read Part I and Part III.