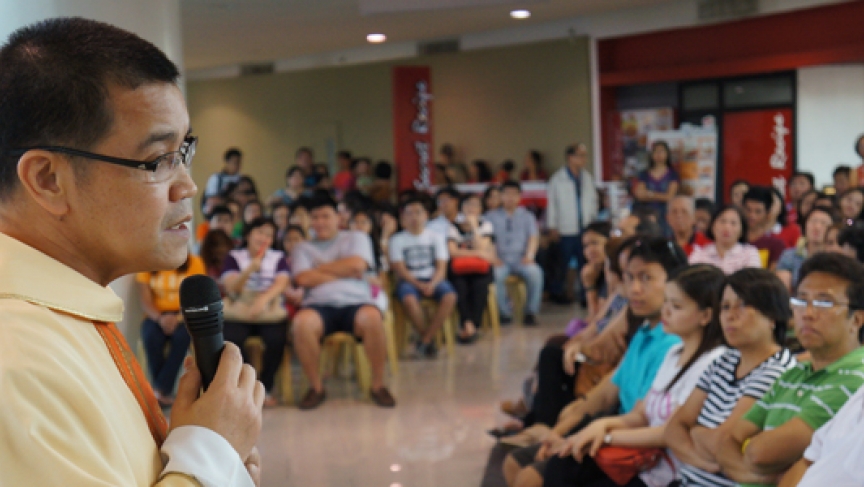 Early on a Sunday morning, people are already streaming into a massive shopping mall in Manila. The seven-story Robinsons Place is a temple of consumerism. It houses about 350 stores, including gun shops, dental offices, massage parlors, and a Kenny Rogers Roaster.

The music and the crowds can be a little overwhelming after a while. But up on the fourth floor, next to the Cineplex and a barber shop, the atmosphere is more soothing.

A Catholic Mass is being offered for hundreds of Filipino mall-goers who are seated in plastic chairs around a makeshift altar. To reach his congregants, the priest switches between English and the local language, Tagalog.

The Catholic Church in the Philippines is doing all it can to reach out. Even though the Philippines is the third largest Catholic country in the world, the Church has been losing followers. In this hot, humid country, many families prefer to spend Sundays in climate-controlled malls than in church. So the priests have followed them.

At Robinsons, I meet Father Maximo Villanueva. He also preaches at a nearby church but he admits that the mall is more user-friendly. And there are benefits to celebrating Mass in a shopping center.

"About a second after the Mass you can eat anywhere and go to the movies. I like it," Father Villanueva says, laughing.

But the Catholic Church's problems run deeper than a lack of AC. Many Filipinos are dismayed by the sex abuse scandals in the Church and they reject its conservative stance on social issues. Last year, for example, the country's Catholic hierarchy strongly opposed a popular new law that provides free birth control methods to poor people. (That law is now on hold as the Supreme Court decides whether it's unconstitutional.)

Bringing Mass to shopping malls might help reverse these trends. In fact, the practice is now being copied by a handful of priests in the US and Europe. But there are some downsides, says Rene Santiago, a retired car salesman attending Mass at Robinsons Place. He complains that people come to Church, but they don't dress properly.

"They wear shorts. They wear slippers as if they are in the house," he says. "I mean, you only face God once in a week. Why don't you dress properly?"

Another problem is that an escalator cuts through the space where Father Villanueva holds Mass, bringing a constant stream of pedestrians.

"I am very aware that most people are not fully concentrated in the celebration," says the priest, "There are too many distractions. But it's the challenge, I believe. Wherever they are, the church will be there for them."

With the religious service over, workers stack chairs and haul away flower pots. Soon this temporary holy space will be overrun by shoppers. But Mass here has become so popular that Father Villanueva is lobbying management to build a permanent chapel inside the mall.