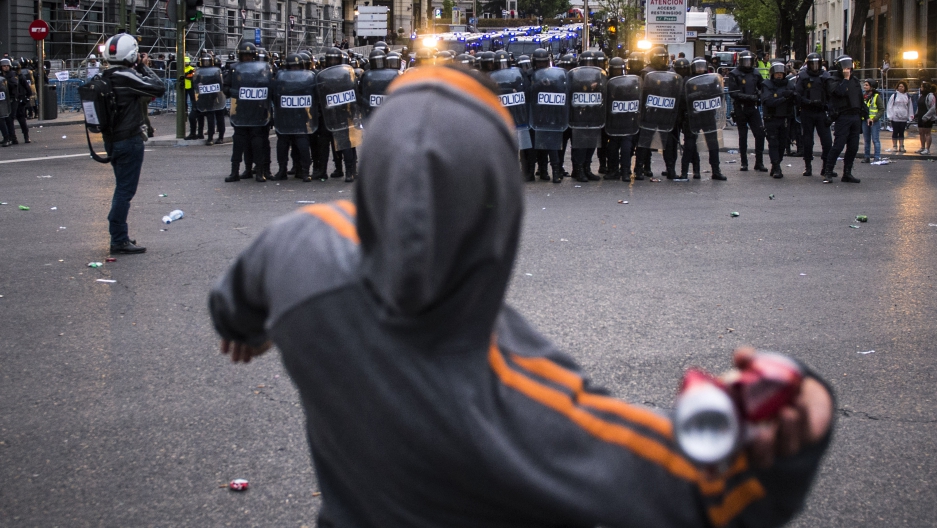 MADRID, Spain — David Alegre should have been a nervous wreck. Less than a week before the premiere of the opera he wrote and directed, one of his lead singers hadn’t turned up for rehearsal.

The energetic, wiry man of 36 nevertheless remained calm and good-humored. That’s because everyone involved in the production, from the lead soprano to those building the scenery, were volunteers, driven as much by their anger about Spain’s economic crisis as the chance to perform in public.

“It’s impossible to get upset,” Alegre said. “We have an enthusiasm that you don’t find in a professional group, and that’s magic.”

“El crepusculo del ladrillo,” or “Twilight of the brick,” premiered on Sunday in la Tabacalera, a rundown tobacco factory in downtown Madrid, to rapturous applause.

A nod to Wagner’s “Goetterdaemerung,” or “Twilight of the Gods,” the opera takes on Spain’s ongoing economic crisis, which started to unfold in 2008 after the country’s real estate bubble burst.

The story involves a village seduced into property ownership and consumerism before imploding in chaos. Despite the tragic subject matter, the tone is surrealist and often comic.

The opera’s premiere is part of celebrations this month to mark the second anniversary of the “indignados” or “15-M” protest movement, which sprang up in May 2011 to oppose Spain’s two-party political system and the government’s management of the economic crisis.

The musicians and singers are all members of Solfonica, an orchestra linked to the indignados, and evidence of the varied response to a crisis that continues to deepen despite predictions it would end this year.

“When so many people don’t want to understand what’s going on in their country, you have to resort to other ways of communicating, such as through comic opera, to get across how absurd our crisis has been,” said Jose Manuel Naredo, an economist who wrote the libretto.

This month’s celebrations have included a range of cultural events, political assemblies and several large protests.

Demonstrations against government economic policy have become increasingly common across Spain as the economic crisis bites harder, and Solfonica has often provided the soundtrack.

The ensemble played Beethoven’s Ninth Symphony at one recent demonstration and a rousing song from “Les Miserables” at another.

The orchestra also uses guerrilla tactics and humor. Some of its members made news by sneaking into an employment office to play The Beatles’ “Here Comes the Sun” to the pleasantly surprised jobless people waiting in line.

“This is a great way to show society that there are different ways to complain about the present situation in Spain,” said Beatriz Vicente, a soprano in Solfonica, during a break in a rehearsal for the opera. “We can come here and sing and make it clear how different the situation is to what the politicians are saying. This is completely another way of protesting.”

The venue for “El crepusculo del ladrillo” makes for an unlikely opera house. The huge building is tatty, with paint and old posters peeling off the walls. However it helps evoke the bleak situation Vicente and her colleagues in Solfonica want to convey.

Spain has an unemployment rate of 27 percent, which rises to 57 percent among people under the age of 25.

The bank sector is still struggling to reform after its exposure to the burst property bubble mired it in crisis. And the conservative government of Mariano Rajoy has been battling to rein in the public deficit through tax increases and spending cuts agreed with European officials.

But economic statistics released this month offer little respite despite the austerity measures. They show the euro zone’s economy shrinking 0.2 percent in the first quarter of 2013, more than analysts had expected.

Struggling southern economies such as Spain and Italy fared predictably badly, with quarterly contractions of 0.5 percent apiece, but France also fell into recession and Germany’s economy grew less than anticipated.

Spain is exactly three years into its program of deeply unpopular spending cuts and tax rises, with which it’s sought to stave off a humiliating sovereign bailout.

However, the government announced last month it would still be unable to meet its goal of cutting the deficit to under 3 percent of GDP until 2016, two years later than previously agreed with EU authorities.

The bad news, coming in a year economists had predicted would mark a turnaround, has reinvigorated criticism of austerity as the wrong way to tackle indebted countries’ crises.

“All of this must push us toward a European policy which goes for growth,” said France’s Socialist Finance Minister Pierre Moscovici, echoing the recent criticism.

As austerity stretches the tolerance of European citizens and many of their politicians, however, there are signs some euro zone countries are looking to alternative policies.

Among new schemes, European leaders backed by the European Investment Bank are preparing to generate up to $78 billion dollars in loans for businesses as an incentive to hire young people.

More from GlobalPost: The Spanish are coming! Spaniards try their luck in Latin America

However, Solfonica members are so far unimpressed with such hints of a policy shift.

Orchestra director Alegre says the government’s instinct remains to cut public services such as health and education instead of raising taxes for large companies and wealthy individuals. He insists protest is still necessary to raise awareness.

On the night of his opera’s premiere, around 300 members of the public squeezed into the main hall of la Tabacalera, with standing space only.

After the performance, their applause turned into a deafening chant of “Si se puede!” (“Yes we can!”), the indignados’ motto.

With no economic good news on the horizon, they hope their calls may finally be resonating in the corridors of power.