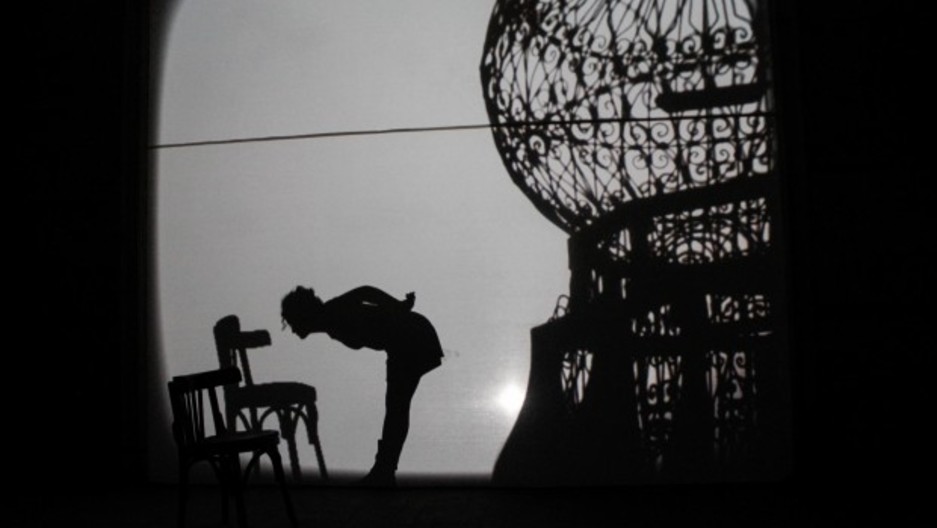 In Egypt, the Muslim Brotherhood, its opponents, and the old regime continue to jockey for power. In the midst of a security vacuum, a looming economic crisis and a political stalemate, no one is paying much attention to culture. When and if they do, artists don't expect much encouragement from the new Islamist government. But for the moment, they are taking advantage of a new margin of freedom, using public spaces and trying to reach wider audiences.

As you walk past a particular shop in downtown Cairo, you notice something strange. A large face nearly fills the entire window, and its eyes follow you as you move.

The installation is the work of Ganzeer, an artist who has created some of the most memorable street art in the past two years, and the tech-savvy Yasmine El Ayat, who describes herself as an "interaction designer." It uses a projector and the motion sensor from an Xbox to make the eyes move. Every day, it features a different face and gets different reactions.

The artists often come to observe.

"I remember there was a street sweeper in the early morning and then he noticed what was happening and dropped everything he was doing and started to play with it and interact with and figure out how it works, trying to peak inside to see if someone is controlling it or playing a game on him. And then a group of girls from school were passing by at the same time and they started giggling: 'Oh my God he's watching me.' And then running back and forth trying to trick the guy who's watching them," El Ayat said.

El Ayat said the point is to engage the public in a kind of conversation that doesn't usually exist here, about who has the right to monitor whom.

Around the corner, a small crowd gathered in one of the neighborhood's beautiful, dilapidated old buildings as Marion and Ghazy, a French-Tunisian artist couple, performed a dance called "I'm Nobody's Shadow," on the theme of freedom.

The performance was part of the Downtown Contemporary Arts Festival, which also featured experimental performances from around the world, concerts, film screenings and public art.

One of the festival's goals was to revitalize an arts scene that stagnated under the Mubarak regime, because of censorship, nepotism and a lack of vision, said festival director Ahmed El Attar.

"There has been a major disintegration of the art and culture scene in Egypt for the last 30, 40 years. We come out of a revolution and we look around and art and culture, like everything else, are in a terrible state," El Attar said.

The festival took place in central Cairo, the epicenter of the revolution. Ever since the ouster of Hosni Mubarak, it has also been the site of constant conflict, of protests and bloody clashes.

"People realized the public space is theirs, they took it back, they're demonstrating, they're expressing themselves," El Attar said. "But we also need to go back to public space as a place of enjoyment, as an artistic space, as a space where people can meet and sit and enjoy being there."

This is still new and "revolutionary" here, because Mubarak's police state treated public space as the regime's property, and essentially "loaned" it to the public. Now, people are taking charge of public space — to express their anger and creativity.

For Ganzeer, who has painted striking murals criticizing the army and memorializing dead protesters, the most important thing is to make art that, as he said, "shakes things up." The worst thing, he said, is to get no reaction.

"I think any good work of art has to get a really positive or a really negative reaction. If it gets nothing, if it's in between, then it's probably, like, 'this meant nothing to anybody,'" Ganzeer said.

We are speaking in a large old apartment Ganzeer shares with several other artists. Every month, they put on a show in one of its rooms, calling on friends and acquaintances to contribute.

Festival Director Ahmed El Attar said Egypt's cash-strapped, conservative Islamist government can't be relied on these days for funding. But on the other hand, state censors are leaving artists alone.

When he informed government officials of the festival's events, El Attar said, they agreed to everything except the street performances.

"But the thing is," he said, "we were already in the street, doing the event. So we did it anyway. So… they're still in their old mentality, but they're impotent. They can't go down and forbid things. And we're taking advantage of this. Will this last? I have no clue. I hope it does."

Many Egyptian artists share El Attar's sense of uncertainty, and urgency. The economic and political situation in Egypt is dire. But artists are freer than they have been in a long time to share their work with the public. And they're seizing their chance.