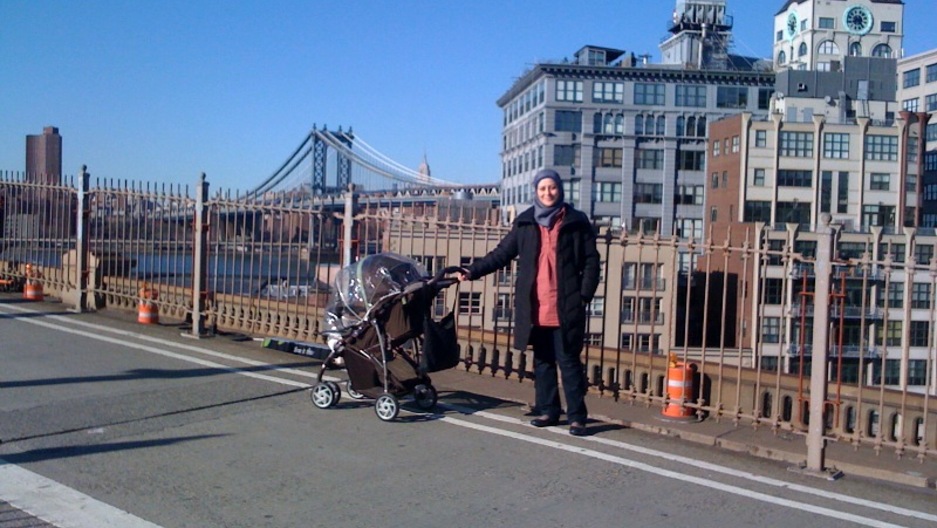 Ahlam and her infant daughter on the Brooklyn Bridge. Ahlam left Syria in late 2012 while pregnant to escape the violence there.

Share
The first thing Ahlam does when she wakes up in her parents' apartment in Brooklyn, New York, is check out Syrian Facebook pages. The 28-year-old ophthalmologist wants to find out whether there's been more fighting in Ariha, her hometown in Syria's Idlib province. Then she calls her husband, Ismael, on a shaky landline. Ahlam left Syria late last year when she was about eight months pregnant. "I came here to have my baby because it's safer and there is no safe place to give birth over there," she says. "Now I'm with family, but the thing is, my husband is over there." Like Ahlam, Ismael is a doctor. They met in medical school in Aleppo. Ahlam has been on maternity leave from her work at a hospital in Idlib City. She says it took her hours to get to her job everyday, with all the road blocks. And she says the hospital only treats supporters of Syrian President Bashar al-Assad, and she supports the opposition. "We get too many soldiers to treat," she says, adding that sometimes the government soldiers would start shooting inside the hospital. These days, she spends most of her time caring for her young daughter in her parents' apartment, worrying about what's happening back home. "I keep looking on the internet. My mind is always thinking, what's going on in Syria." She says it would be easier if she were working, "but since I'm not working, it's more frustrating for me to sit and watch the news." While she watches the news, Ahlam has been weighing her options. Her maternity leave has now expired, and if she stays here, in the safety of her family home, she'll lose her medical residency. Even though she has a green card to work, she would have to wait years before she could practice in the US. And if she stays in the U.S, she doesn't know when she will see her husband again or when he will finally get to see their daughter. Ahlam has tried to look into bringing her husband over here. But she says that's almost impossible since the US closed its embassy in Damascus last year. He can't apply for asylum while he's still in Syria, and she worries that getting him a green card to work in the US would take at years. "I asked a lawyer and he told me you can't do anything but apply for him," she says. In the meantime, her family is pressing her to stay. They don't want her to go back to a raging civil war. An estimated 80,000 people have been killed since the uprising broke out in March 2011. "My family wants me to stay because it's safer for me and the baby," Ahlam says. "But I have no other choice. I need to go back." Ahlam is making arrangements for her and her daughter to return to Syria. But even the logistics are complicated. She's had trouble getting a passport for the baby. First she needed her husband's signature, which finally came through. But the passport still hasn't arrived. So even though she's made the decision to go, she's still waiting. Yael Even-Or works with Feet in Two Worlds, which brings the work of immigrant journalists to public radio. It's a project of the Center for New York City Affairs at The New School.