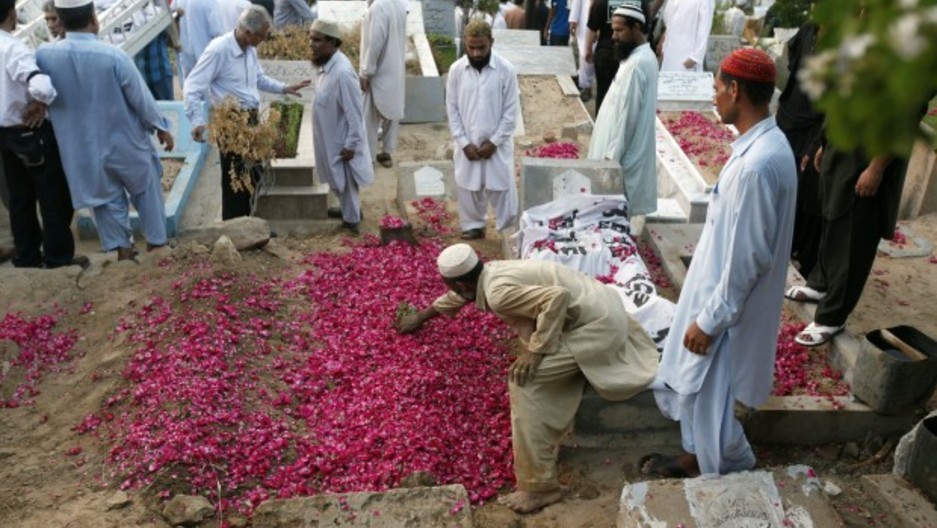 A man places a rose branch on the grave of Zara Shahid Hussain, a senior politician from the Tehreek-e-Insaf political party headed by cricketer-turned-politician Imran Khan, after rose petals were scattered on her grave during her funeral in Karachi May 19, 2013. An upmarket constituency of Karachi voted again under tight security, a day after gunmen killed Hussain in the district and a week after general elections. It was not immediately clear who killed Hussain. Khan blamed the killing on the Muttahida Quami Movement (MQM) party, which has a stranglehold on the city. MQM leaders denied responsibility, condemned the killing and demanded a retraction from Khan. REUTERS/Akhtar Soomro (PAKISTAN - Tags: CRIME LAW OBITUARY POLITICS CIVIL UNREST ELECTIONS) - RTXZSW4

Share
In Pakistan, a high-ranking female politician was gunned down on Saturday, creating instability for a key US ally. Reporter Fahad Desmukh in Karachi tells anchor Marco Werman about the murder of Zara Shahid Hussain — a senior official with the PTI party – which had performed well in last week's vote. Hussain worked for Imran Khan, the leader of the PTI and a former cricket star who is convalescing from a campaign trail fall.