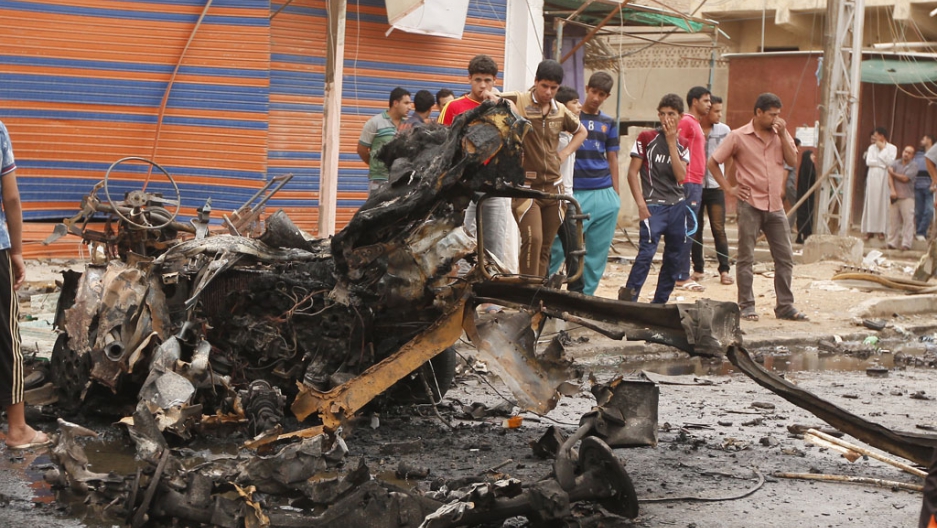 Iraqis look at the remains of a car bomb that detonated in the Kamaliya area of eastern Baghdad on May 20, 2013. A wave of 12 bomb attacks across Iraq killed at least 15 people and wounded dozens more, security and medical officials said.
Credit: ALI AL-SAADI
Share

A wave of bombings Monday reportedly killed at least 70 people across Sunni and Shia neighborhoods in Baghdad and the city of Basra.

The recent bloodshed has raised fears of a return to the sectarian violence of 2006 and 2007, which nudged the country to the edge of civil war.

The New York Times cited security officials as saying that the series of blasts began in the oil-rich southern city of Basra when two car bombs went off at a restaurant and a bus stop.

Soon after, around ten car bombs went off in Baghdad, targeting marketplaces and crowded bus stops during the busy morning hours, the Associated Press wrote.

According to the AP, the deadliest attacks happened in Baghdad's northern Sabi al-Boor neighborhood and Kamaliya in the east, with seven killed in each.

Two car bombs in Basra — one near a restaurant and the other at the city's main bus station — killed at least 13 and wounded 40, the AP cited provincial police spokesman, Colonel Abdul-Karim al-Zaidi, as saying.

The attacks are the latest in a wave of violence that has claimed more than 270 lives since the beginning of May, as tensions simmer between Iraq's Sunni minority and Shia majority.

Iraqi Prime Minister Nouri al-Maliki, who has been acused by Sunni protesters of discrimination, called for joint Sunni-Shia prayers on Sunday.

"I call for holding joint prayers... in one of the large Baghdad mosques" each Friday, Maliki said in a statement, according to France 24. "Those who target mosques are enemies of Sunnis and Shias alike, and are planning to ignite (sectarian) strife."

The Washington Post wrote that the civil war in neighboring Syria, where a Sunni rebel movement is fighting against a Shia regime, has emboldened Iraq's own Sunni minority to challenge its government.

"Iraq’s embittered Sunnis say the successes of the Syrian rebels have given them the confidence to challenge what they call worsening government discrimination and abuse against the minority that once ruled this country under Saddam Hussein," said The Post.

No one immediately claimed responsibility for the blasts.