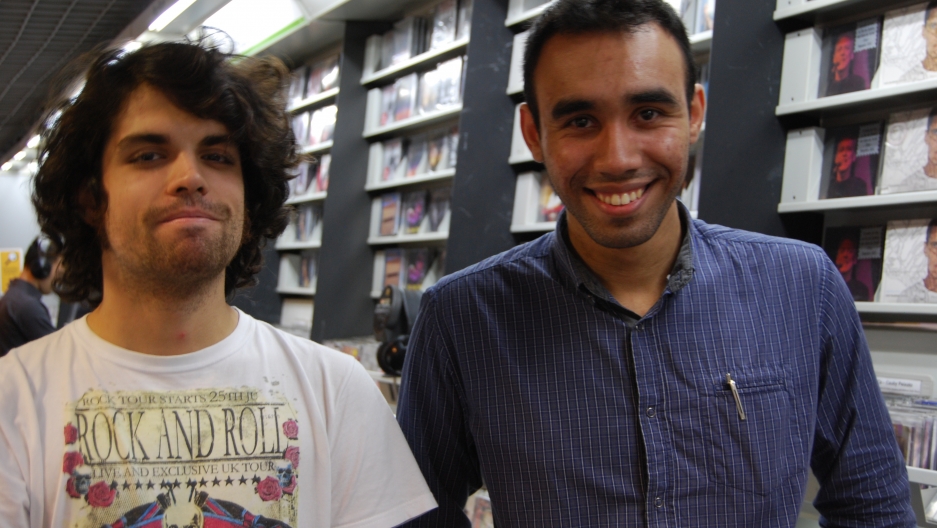 As I was preparing to leave Boston for a foreign reporting trip in Brazil, the music producer here at The World, April Peavey, asked me to go to a record store in Brazil and find out what's popular there right now.

My first morning in Brazil, I walked into the FNAC music store on Paulista Avenue in Sao Paulo's business district and sought the guidance of a few cool looking employees in their 20's. I figured, they'd know what was up. I met Gabriel Vianna and asked him to recommend three Brazilian musicians or bands that are selling well right now.

Vianna's first choice was easy. He wanted to give his remaining choices a bit more thought though — he seemed almost nervous flipping through CD's. I had told him I knew nothing about Brazilian music, and he seemed to feel personally responsible for my education.

My interpreter, Ana Pereira, stepped in and suggested I try 72-year-old Roberto Carlos, known in Brazil simply as "The King."

"You would have to take Roberto Carlos," said Pereira. "Robeto Carlos is the typical singer for the old ladies who are (in their) 60's, because at the end of his shows, he brings a bunch of roses and he kisses the roses… So, he's very romantic."

The song they chose was "Esse Cara Sou Eu," which translates into, "I am that man." Carlos music is selling well again because this song is now featured on one of Brazil's most popular evening soap operas.

The song was very pleasant. But I asked Vianna, what if I wanted something with a little more… sizzle? Vianna picked out of a CD of a guy who looked like a cross between Jimmy Hendrix and Bob Marley. His name: Seu Jorge.

Vianna said, "Seu Jorge has a style very (much) like a samba, a little pop music, there's a kind of rapping."

I bought Seu Jorge's CD: Musicas Para Churrasco Vol 1." I really liked the entire album, but my favorite song was, "Vizinha," or "Neighbor."

So, three recommendations: Marisa Monte, Roberto Carlos, and Seu Jorge. Mission accomplished. But as I was getting ready to make my purchase, I could tell that my Brazilian music guides didn't want me to leave just yet.

Another store employee, Thiago Olivera, was listening to our conversation; he strolled over and jumped in on the conversation. He thought Seu Jorge was the wrong call.

Olivera recommended Chico Buarque instead. He's not the hottest seller right now, but he's a Brazilian classic: a lyricist known for his social commentaries. It'd sort of be like me telling them they couldn't leave the US without checking out Bob Dylan or Bruce Springsteen.

Gabriel Vianna agreed, "It's very good, you must buy it." He picked out Buarque's album, "O Politco," and Olivera chose the song "Aspera de Voce."

I realize the craziness of me approaching some strangers in such a musically-rich country like Brazil and asking them to select only three albums to show off their culture. I mean, how could I chose only three American CD's to represent the American sound today? But given the tight parameters, I thought my Brazil music guides did an excellent job. I enjoyed all of their choices.

I look forward to hearing choices #5 through #8 on my next visit.