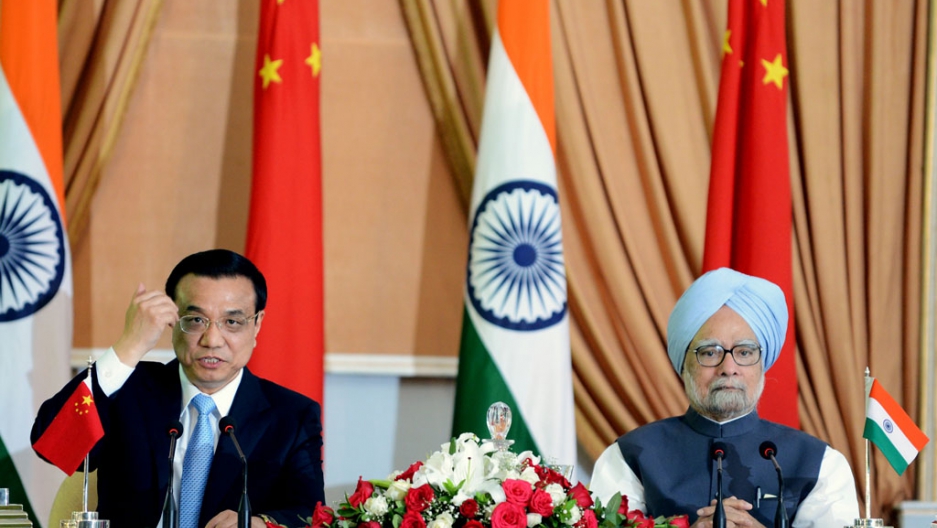 Prime Minister of the People's Republic of China, Li Keqiang (L), gestures while delivering a statement as Indian Prime Minister Manmohan Singh (R) looks on after the signing of agreements ceremony in New Delhi on May 20, 2013. Chinese Premier Li Keqiang pledged Monday to build trust with India and declared that ties between the Asian giants were key to world peace as he visited New Delhi only weeks after a border spat.
Credit: RAVEENDRAN
Share

NEW DELHI, India — India and China's premiers discussed economic and military cooperation on Monday, just weeks after their two countries were involved in a tense border standoff in the disputed area of Daulat Beg Oldie, Ladakh.

On his first trip abroad since taking office, Chinese Premier Li Keqiang said, "Both sides believe that we need to improve the various border-related mechanisms that we have put into place and make them more efficient. We need to appropriately manage and resolve our differences," according to Reuters.

Li offered New Delhi a "handshake across the Himalayas," and pledged his commitment to "peace and tranquility" along India and China's shared border.

"While seeking an early resolution of the boundary question, Premier Li and I agreed that this must continue to be preserved," said Indian Prime Minister Manmohan Singh, according to The New York Times.

Li said, "Both Mr. Singh and I believe there are far more interests than differences between our two sides. We need to confront issues with a broad mind, and tackle them in a mature way," according to the BBC.

The recent border standoff between the Asian giants began on April 15, when 50 Chinese troops were discovered within the Ladakh region of Kashmir, which India claims as its territory. That prompted India to station troops just 300 yards away from China's troops, with the two sides facing each other for nearly three weeks before the dispute was resolved.

The territorial dispute has existed between the world's two most populous nations since the 1950s.

The nominal commitment to resolving the border dispute and eight agreements signed during Li's visit suggest that China is keen not to make India an outright adversary.

China's state-run media put the visit in a warm light, highlighting the ties between the two countries and their intertwined economic interests.

China is one of India's biggest trading partners. Li stressed how by increasing cooperation the two countries could become the "new engine" of the world economy.

But New Delhi would be wise not to read too much into Li's espoused willingness to deal, according to Indian foreign policy expert Raja Mohan.

Throughout Singh's second term, India has allowed "ideological romanticism and political timidity to overwhelm common sense in dealing with China," Mohan wrote this morning in his column for the Indian Express.

Li's conciliatory words and willingness to ink deals on this visit fits neatly enough into a long-standing pattern, in which Beijing first panics and then reassures New Delhi, always maintaining the upper hand in the relationship.

The joint statement on the border talks amounts to little more than the reiteration of a vow to continue with the same, seemingly fruitless, negotiations that have been underway for years: "We agreed that our special representatives will meet soon to continue discussions, seeking early agreement on a framework for a fair, reasonable and mutually acceptable boundary settlement."

Singh and Li hammered out areas of mutual interest on issues ranging from "climate change, Doha Development Round of WTO, energy and food security" to fighting terrorism and preventing piracy off the coast of Somalia.

But a few words missing from the joint statement were also significant. For the second time, India refused to affirm the so-called "One China policy," which backs China's contention that Taiwan is simply a renegade province and acknowledges Beijing's sovereignty over Tibet.

The message: "While Delhi acknowledges China's sovereignty over Tibet, Beijing's position on Jammu & Kashmir has become increasingly hostile to India," Mohan wrote in his column. "Singh must tell Li that the respect for core concerns, including territorial sovereignty, must be mutual and cannot be one-sided."

Indeed, there's plenty that India and China disagree on that won't be resolved anytime soon: India's harboring the Dalai Lama and Tibetan dissidents, China's growing assertiveness in territorial disputes, disputes over water rights; and lingering suspicion on India's side over the motives for China's provocation last month.

Don't expect any of that to change overnight — it's what happens after Li Keqiang's visit that will set the tone in relations between the two countries, particularly on the disputed border.

New Delhi was on quasi-lockdown for Li's visit, with several Metro stations closed and a strong police presence in the Tibetan colony of Majnu Ka Tilla.

Nevertheless, Tibetans managed to stage small-scale protests against the Chinese premier's visit outside the Taj Hotel and a central New Delhi police station.

More from GlobalPost: China and India withdraw troops from Ladakh