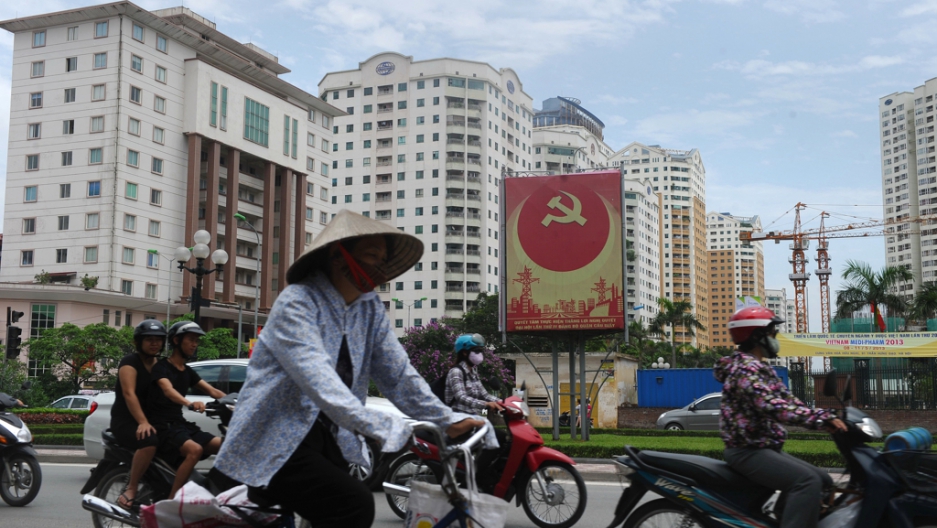 Motorcyclists and cyclists ride on a street inside a newly developed residential quarter in Hanoi on May 7, 2013.
Credit: Hoang Dinh Nam
Share

NEWTON, Mass. — This past April 30 marked the 38th anniversary of the fall of Saigon and the end of the Vietnam War. The iconic images of American helicopters evacuating people on building rooftops in Saigon in April 30, 1975 made it unimaginable that someday Washington policymakers and Hanoi communist leaders would explore steps towards a strategic partnership between the two countries.

But the unimaginable has become possible. The US-Vietnam relationship has gradually taken the shape of a strategic one, albeit with some hurdles, through enhanced economic, diplomatic and defense relations.

In 2000, six years after President Bill Clinton lifted the US trade embargo against Vietnam, the two countries signed a historic bilateral trade agreement (BTA), opening a new era of economic cooperation. Bilateral trade volume increased from $1.2 billion in 2000 to nearly $25 billion in 2012. During this period, Vietnam consistently enjoyed an annual trade surplus that increased from $454 million in 2000 to more than $15.6 billion in 2012. The US is currently Vietnam’s largest export market and source of trade surplus.

Through the BTA, the US wanted Vietnam to commit itself to a series of reforms in trade, investment, and regulatory regimes to make it easier for American investors and goods to enter the country. This has contributed to a gradual transformation of the Vietnamese economy towards one that is more rules-based, market-oriented.

As a result, American businesses have made inroads in Vietnam in recent years. The US was the largest foreign investor in Vietnam in 2009 with the total registered investment of $9.8 billion. Although this number has declined in recent years, future prospects remain positive. According to the 2012-2013 Association of Southeast Asian Nations Business Outlook Survey, Vietnam is the most popular location for business expansion for American companies doing business in Southeast Asia.

US and Vietnam, together with nine other countries, are currently negotiating the Trans-Pacific Partnership (TPP), which is touted to be a new-generation, high-standard trade agreement of the 21st century. The finalization and implementation of this trade deal would give a huge boost to US-Vietnam economic relations; Vietnam would get even greater access to its largest export market while America would see deeper reforms in Vietnam.

Win-win economic relations help build a good foundation for enhancing diplomatic and defense relations between the two countries. The US sees Vietnam as an important partner in its efforts to boost American engagement in the region, especially in the face of America’s “pivot to Asia.” Washington and Hanoi have cooperated through various venues, including the ASEAN Regional Forum, the Lower Mekong Initiative, the Asia-Pacific Economic Cooperation, the East Asia Summit and the ASEAN Defense Ministers’ Meeting Plus.

When Vietnam chaired ASEAN in 2010, it was able to engage the US on the South China Sea dispute, which has been a hot-button issue in Vietnam. Visiting Vietnam that year, Secretary of State Hillary Clinton declared in Hanoi that the US had a “national interest” in the South China Sea in terms of ensuring “freedom of navigation, open access to Asia’s maritime commons, and respect for international law.” This was what Hanoi had hoped for as it sought to internationalize the issue and resolve it in accordance with the United Nations Convention on the Law of the Sea in the face of China’s aggressive stance.

The two countries also have increased cooperation in the defense arena. Defense related activities, including high-level exchanges of defense officials in both capitals, port calls of American warships in Vietnam, and annual strategic defense and security discussions have become more frequent.

In its Quadrennial Defense Review 2010, the US Department of Defense identified Vietnam as a Southeast Asian country that it was working with to develop a new strategic relationship in the region. In a 2012 visit to Vietnam, Secretary of Defense Leon Panetta made a historic trip to Cam Ranh Bay, a former US Navy base overlooking the South China Sea. Standing on the US Navy cargo ship USNS Richard E. Byrd anchored in this strategic deep-water port, he said: "The more I am out here, the more critical I view this region in terms of our national defense and the defense of the world.”

Having access for US warships to Vietnamese ports, especially in Cam Ranh Bay, is an American priority in increasing its defense ties with Vietnam. So far, Vietnam has not granted this American desire, because Hanoi does not want Beijing to think that Vietnam is teaming up with the US to pose a threat to China.

But Hanoi is willing to enhance defense and security cooperation with Washington so long as it fits the Vietnamese national interests of sovereignty protection, peace, and non-alignment. It can be expected that American and Vietnamese strategic planners will continue to carefully seek ways to advance defense ties within the boundaries they set for themselves. And the speed at which they advance would significantly depend on how China conducts itself, especially with respect to the South China Sea issue.

Apart from the China factor, political differences constitute another factor that influences the level of closeness between the two countries. The US is concerned about Vietnam’s performance on the issues of freedom and human rights, and has called for improvement on these issues as a way to advance bilateral relations. Certain circles within the Vietnamese Communist leadership are doubtful of American intentions, arguing that the US may be pushing for a regime change through its pressure and involvement in the areas of freedom and human rights.

Although political differences are hurdles to advancing the US-Vietnam relationship, they are not insurmountable, especially when Vietnam would be likely to engage in political reform, sooner or later, to accommodate rising domestic pressure. It is a safe bet that this relationship will be more sweet than bitter in the long run.