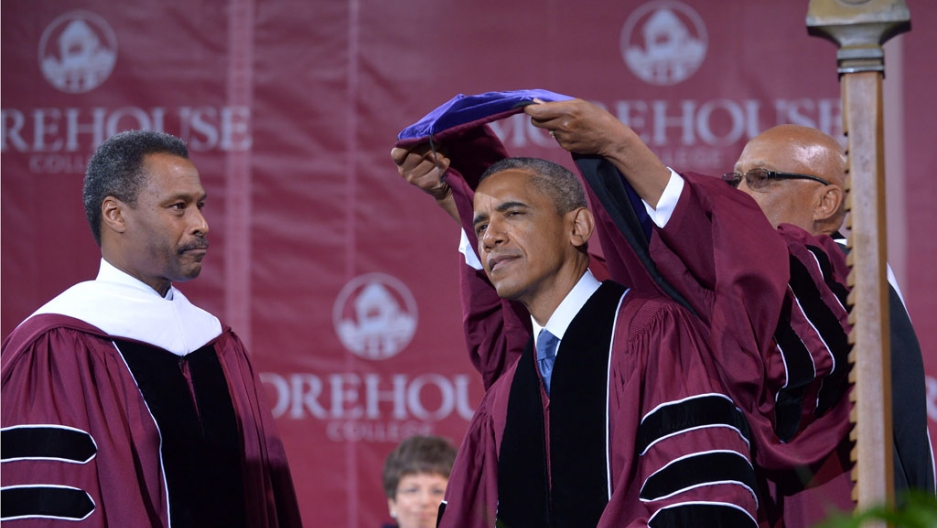 US President Barack Obama receives an honorary doctor of law degree from President of Morehouse College John Wilson, left, after delivering the commencement address on May 19, 2013 in Atlanta, Ga.
Credit: MANDEL NGAN
Share

Morehouse College graduates have a responsibility to themselves, their families and society to shun excuses in favor of effort, President Barack Obama told the all-male, historically black university in Atlanta on Sunday.

Obama is the first sitting president to deliver a commencement speech at Morehouse, and told 500 graduates and 10,000 guests that there is reason for “hope” despite the unsure economy, the Atlanta Journal-Constitution reported.

“You live in a time when advances in technology and communications put the world at your fingertips,” Obama said. “Your generation is uniquely poised for success unlike any before it.”

To appreciative cheers and under constant threat of heavy rain, Obama compared “Morehouse Men” of today with those from just a generation ago.

He spoke about another graduate, Dr. Martin Luther King, Jr., and his struggles to break segregation through civil disobedience.

“Young Martin learned to be unafraid,” Obama said. “He, in turn, taught others to be unafraid. And over the last 50 years, thanks to the moral force of Dr. King and a Moses generation that overcame their fear, and cynicism, and despair, barriers have come tumbling down, new doors of opportunity have swung open; laws, hearts, and minds have been changed to the point where someone who looks like you can serve as President of the United States.”

More pointedly, Obama told the graduates that they need to reject stereotypes.

While many black people still struggle with violent communities, joblessness and bleak futures, graduates have achieved something far greater at Morehouse and have the power to set better examples for those communities. Obama told them not to squander their gifts.

He also spoke about his own upbringing without a father, a boy raised by a single mother and grandparents who willingly sacrificed their own comforts for his.

He pleaded with those listening to avoid that path to “be the best husband to your wife, or boyfriend to your partner, or father to your children that you can be because nothing is more important.”

While more personal than political, Obama’s speech did include references to his health-care policies and economic recovery, what he called successes.

“Nobody is going to give you anything you haven’t earned. And whatever hardships you may experience because of your race, they pale in comparison to the hardships previous generations endured – and overcame.”

The full transcript of Obama’s speech can be found at AJC.com.