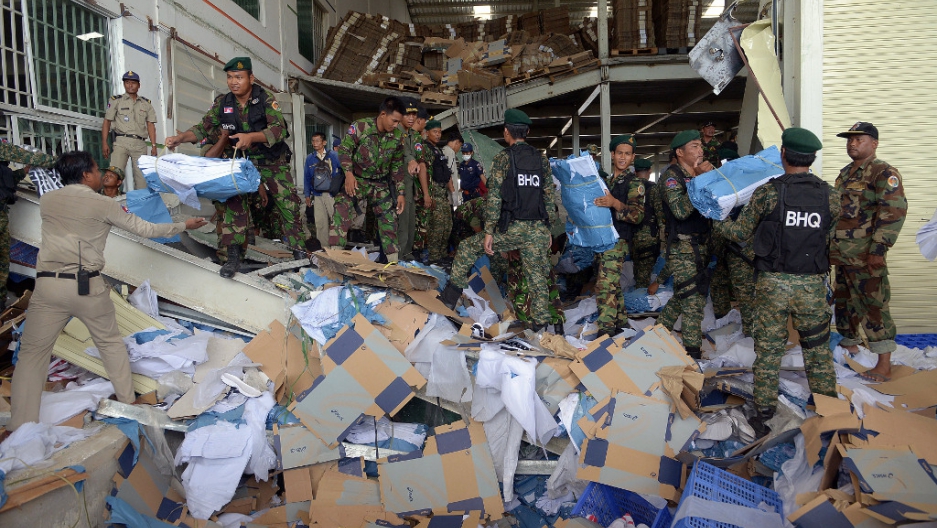 PHNOM PENH, Cambodia — Hem Navy lies on a stretcher in the emergency room of a local hospital, hours after she was pulled out from under the collapsed ceiling of an Asics shoe factory in the southwestern province of Kompong Speu.

Half her face is severely bruised with signs of internal bleeding around her eyes, and her left foot is bundled in a bloody bandage.

“When the ceiling fell, I ran to try and escape it,” she said.

A female and a male coworker, Sim Srey Touch and Rim Saroeun, both 22, died.

This comes barely three weeks after a clothing factory collapsed in Bangladesh and killed more than 1,100 workers, the single deadliest disaster for the global garment industry that has galvanized international brands and governments to re-examine the industry’s safety standards.

Global retail giants — such as H&M, Gap, Puma and Wal-Mart — have flocked to Cambodia as a cheap labor alternative.

Experts even have exalted Cambodia as something of a “model” — at least in comparison with Bangladesh.

Now, after the deadly Wing Star Shoes accident, many want a closer look at what cracks are emerging in this Southeast Asian country’s facilities, and what’s being done about it.

Two days before the shoemaking plant’s collapse, Navy heard a sharp sound, she said, likening it to the gnashing of steel beams.

“We heard it but we did not see any cracks in the building, so we dared not tell the manager,” she said.

Then, on Thursday, the mezzanine level above the factory’s entryway buckled under the weight of concrete flooring and hundreds of boxes of shoes stored there. Authorities have blamed the collapse on shoddy construction of the mezzanine, which the factory had done without a permit.

That’s troubling for Cambodia, where last year the garment industry generated more than $4 billion in exports, over 80 percent of its gross domestic product, and which is supposed to be carrying out exemplary efforts to ensure buildings are safe workplaces.

Since 2001, the International Labor Organization (ILO), a UN agency, has sponsored a Best Factories program there.

While that produces bi-yearly “synthesis” reports about the industry in Cambodia, detailing trends in terms of noncompliance issues, the program does not disclose the names of factories that are failing to comply with the law.

As a result, critics of Better Factories Cambodia, or BFC — which has an annual budget of about $1.2 million — say factory violations persist. They say factory owners and international brands do not feel compelled to make the necessary changes.

Cambodia, a 'model' compared to what?

Despite the recent ceiling collapse at Wing Star Shoes, Van Sou Ieng, chairman of the Garment Manufacturers Association in Cambodia, said Cambodia could still be seen as a model.

The Better Factories program is “good enough” in terms of its monitoring, said Van, whose group represents more than 500 exporting factories employing more than 650,000 workers.

“[Better Factories] monitors all the factories for compliance of labor standards and international human rights standards,” Van said. “Enforcement should be under the Cambodian authority, and when the Cambodian government allows an international body to inspect their national factories, it’s already a huge step forward.”

Defending the industry’s safety standards, he said such an incident has only happened twice during his 20-year tenure as chairman. The previous accident, which occurred a few years ago, had no deaths or injuries, he added.

“We regret that such things happen and it is very sad to see there are casualties — two deceased and nine injured,” Van said. “But it doesn’t happen all the time.”

However, Dave Welsh, country director of the Solidarity Center, a US-based workers’ advocacy organization, had a less rosy view. Welsh said Cambodia’s “model” industry is only in comparison to Bangladesh, where workers get paid approximately $39 a month.

In addition to Bangladesh’s Rana Plaza building collapse last month, more than 600 garment workers have died in factory fires there since 2006, according to research by the advocacy group International Labor Rights Forum.

A Cambodian garment factory on the outskirts of Phnom Penh. (Khem Sovannara/AFP/Getty Images)

“That is such a low threshold and it’s crucial from a worker standpoint and a trade union rights standpoint that [international brands] aim higher than that,” Welsh said.

To become a “model industry,” he recommends that the Cambodian government impose an appropriate living wage, enact a trade union law to protect union activists, and abolish the excessive use of short-term contracts — which union leaders believe creates job insecurity for workers.

“The idea is not for brands to cut and run because that would impoverish some of the world’s poorest workers,” Welsh continued. “The idea is [for the brands] to put your money where your mouth is and actually institute serious reforms on workers and trade union rights in the industry.”

As for the Better Factories program’s monitoring of more than 300 garment factories for safety and health compliance with the country’s labor law, Welsh said it is hamstrung by its financial backers, which include the government, the factories and the brands.

Compared with their counterparts in China, Indonesia and Vietnam, Cambodian workers actually earn less in real terms, the report charged.

“What’s the point of going to the factories if they are only supplying reports to the managers?” Stephan Sonnenberg, lead researcher for the Stanford report, said.

“Cambodian factory managers and the brands who purchase BFC reports have been unable or unwilling to correct many of these violations of the Cambodian labor code even after over a decade of efforts by BFC and other actors to alert them to these problems,” Sonnenberg said by email.

After more than a decade of monitoring, labor activists are still reporting systemic efforts to block independent unionization, while workers continue working excessive overtime hours, with Better Factories’ most recent reporting showing that 88 percent of workers are working overtime. Cambodian workers earn a minimum wage of about $80 a month, which includes a health benefit and a housing allowance, and even working overtime daily only amounts to about $120 a month.

In addition, occupational health and safety violations are systemic — as exposed by Thursday’s ceiling collapse in a massive factory employing more than 7,000 workers.

Jill Tucker, Better Factories’ chief technical adviser, said by email the program was not monitoring Wing Star Shoes “in any capacity,” as the monitoring of footwear factories by the ILO program only began last year and participation by the factories is voluntary.

She also defended the way the program operates. It’s in the process of taking “programmatic steps toward publicly releasing some noncompliance information and the name of the factory it is connected to,” she said.

Leng Tong, director of the Cambodian Labor Ministry’s occupational safety and health department, said the practice of naming and shaming could push factories to address the industry’s working conditions.

“I think the public should be able to see how each factory follows the guidelines and safety measures so that the factory will be ashamed and they will change what they need to implement,” Leng said, adding that his department’s inspection reports are not often heeded. “Most of the garment factories do not care about our [factory] inspectors, but they care about the buyers.”

The labor ministry’s authority also overlaps with other relevant ministries, Leng said. While his ministry is responsible for checking to see if any areas are overloaded, it falls on the land management ministry to make sure that the construction of a factory building is sound.

Instead of pushing the blame around, Ath Thorn, president of the Coalition of Cambodian Apparel Workers Democratic Union, appealed to the government and local authorities to make sure that a tragedy like this never happens again.

“There are some other garment factory buildings in the country where the conditions are really poor, and it could collapse and make our workers suffer like they did [on Thursday],” Ath said, adding that legal action should be taken against the offending factory owners. “If the companies do not obey our government’s policies, the government should close them down. This is the only way to ensure the safety of our factory workers.”

With her injuries, 35-year-old Navy worries about her future. While Wing Star Shoes representatives had presented all injured workers with compensation, Navy said her injured foot would be an obstacle to her family’s livelihoods.

“I have two children and now I am hurt, and I have broken my leg,” Navy said, in tears. “I do not know now how I will live my life or how I can earn my living.”