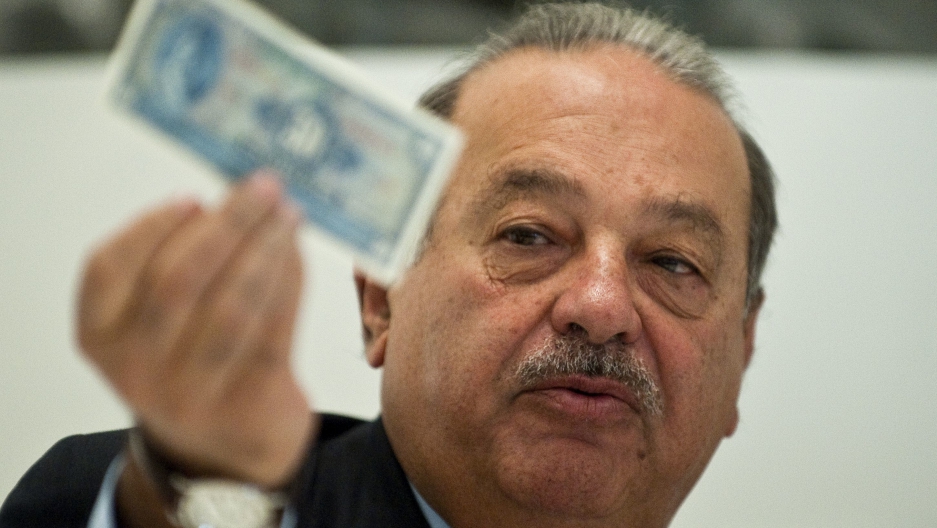 Carlos Slim may have to kiss that peso goodbye.
Credit: Ronaldo Schemidt
Share

With stock in his flagship phone company America Movil slipping because of telecommunications reforms about to become law, Slim lost the title of world's richest man Thursday to Microsoft founder Bill Gates for the first time in six years.

Peña Nieto seems on a roll with his campaign to shift the chatter about his country from drug war violence to economic possibility.

Since taking office in December, he has worked with political opponents to push constitutional fixes aimed at breaking the choke hold interest groups have around Mexico's economy.

Education and labor reforms became law months ago. This week, legislatures in a majority of Mexico's states approved a package promised to weaken the tycoons’ grip on television, telephones and the internet.

Federal lawmakers in Congress will take on even more crucial energy and tax reforms when they return in the fall.

“The Peña Nieto administration came in with an incredibly ambitious economic reform agenda, and in six months they have been able to tick off several major accomplishments,” said Shannon O'Neil, author of the recently released "Two Nations Indivisible," a study of the US-Mexico relationship.

"While there have been a few bumps along the way, what is surprising is actually how quickly and smoothly the process has been so far, as many of these changes hit specific vested interests,” she said.

In response, both Mexico's peso and credit rating have strengthened. News of gangland violence that claims 1,000 lives a month has been muffled. Talk of an impoverished “failed state” largely has evaporated, replaced by that of Mexico as an industrial powerhouse full of middle-class citizens.

It's an encouraging story, one perhaps befitting the Earth's 11th most populous country and 14th largest economy, second in Latin America only to Brazil.

“Know that you are representing an ascending power, a nation determined to transform itself and to grow," Peña Nieto told a gathering of Mexico's diplomats this week. "We are committed to an inclusive and peaceful Mexico, to build a Mexico with quality education for all, a prosperous Mexico.”

Trouble is, about half of Mexicans remain poor and 6 out of 10 work off the books. Many who have reached the middle class, defined by the World Bank as individual income of as little as $3,600 a year, face the constant threat of falling back into poverty, a recent study by the bank finds.

Also, this year's reforms so far — to paraphrase a Spanish expression of skepticism — have produced more noise than nuts. Many will take years, if ever, to have a real impact, analysts say. History suggests they're likely to fall far short of expectations.

The reforms are being shepherded through Congress by Mexico's three main political parties, who've joined forces in the so-called Pact for Mexico.

But each of the parties has faced rebellion within its ranks. And the pact almost broke several weeks ago after Peña Nieto's Institutional Revolutionary Party, or PRI, was accused of using government aid to influence voting in July's local and state elections.

"The reforms approved so far are very far from generating real change," economist Oliver Azuara writes in a recent analysis for Mexico Evalua, a public policy study center. "The rush to approve just anything can be worse than the current situation and can bring serious errors and omissions."

Azuara argues that only a handful of more than two dozen reform packages adopted during Mexico's decades-long modernization effort have had a high impact. Other packages either have yet to gel or have been gutted by toothless bylaws meant to put them in force, he argues.

"The secondary legislation and administrative implementation of the reforms are equally as important as what has been approved so far," Azuara writes.

More from GlobalPost: Turn off your TV. Mexico's revolution will not be televised.

Once Peña Nieto signs it into law, Mexico's Congress will have six months to write the bylaws that implement the telecommunications reforms. The package calls for a new regulatory agency, restrictions on companies with more than 50 percent of the market, the creation of two other television networks, and allows full foreign ownership of Mexican telecom companies.

That met with surprisingly tame push back from Slim, whose America Movil controls 80 percent of Mexico's landlines and more than 70 percent of both its cellphone and fixed line internet connections.

Slim's fortune has dropped by more than $2 billion this year amid plans for the telecom overhaul, but he still enjoys $72.1 billion net worth, according to the Bloomberg Billionaires Index.

Neither did the reforms meet much resistance from Televisa or Azteca, the two networks that control nearly all Mexico's television airwaves.

All three companies for years have effectively used lawyers and lobbyist to derail or delay efforts to whittle down their market share. Some analysts believe that they'll bring the same tactics to bear as the secondary laws are being written.

“One thing is how a reform is made and another how it is implemented,” said Antonio de la Cuesta, an analyst at CIDAC, a Mexico City think tank devoted to economic and crime issues. “Regardless of how the reforms are sold they will depend upon the secondary laws."