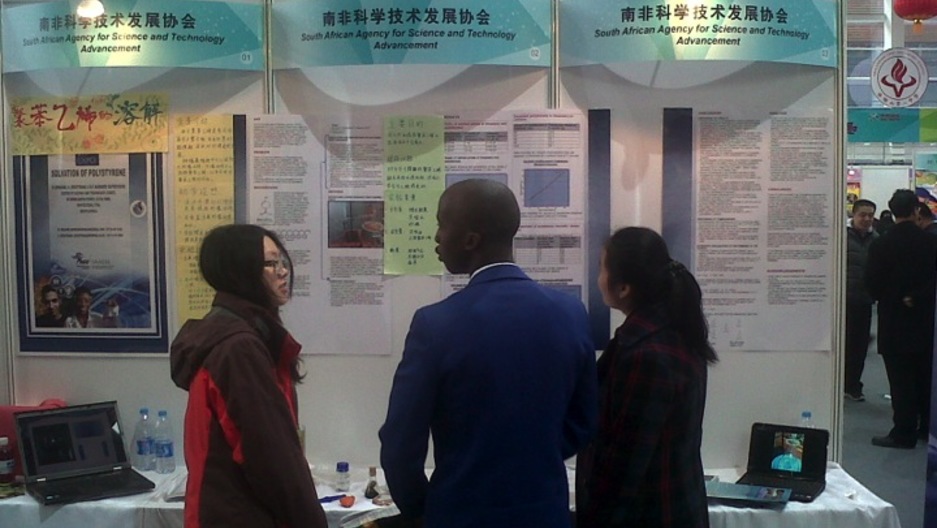 Monwabisi explains his experiment to visitors at the chemistry competition in China.

Earlier this year, I wrote about Monwabisi and Agongile, two COSAT students who won South Africa’s national high school chemistry competition and were invited to an international contest in China.

A few weeks ago, the boys returned from their trip and were honored at a school assembly. The principal announced that they had earned a silver medal, which sent their classmates into an ear-splitting frenzy of cheers. (As it turns out, every team earned a medal, so a silver meant they were in the second tier of competitors, not the second best team overall – a minor detail that the boys should no doubt gloss over.)

I recently sat down with one of the boys, Monwabisi. He showed me some photos and told me all about the trip. This is what he and Abongile learned:

When the airplane touched down in Beijing, the first thing the boys spotted was four inches of powder on the ground. It was the first time either had seen snow. Unfortunately, the competition delegates who met them at the airport couldn’t locate their car in the parking area, which meant Monwabisi and Abongile stood on a curb outside the airport, in a blizzard, for almost an hour, without winter jackets. When recounting this part of the story, Monwabisi confirmed that snow is “very cold.”

2. There are a lot of really good students out there

The science competition was held in a massive conference center. There were hundreds of experiments on display, and students from more than 50 countries. The boys spent most of the first day at their station, answering questions as best they could – although this was sometimes hard, with so many international visitors and no translator. The boys also had a chance to wander the cavernous room and take in some other projects. Monwabisi said there wasn’t one that especially jumped out at him. But, walking across the expo floor, he realized something: there are a lot of really good students out there.

3. Chinese people are good at names

On the first day of the competition, the boys met a remarkably chipper Chinese man. He shook their hands, chatted with them about their project, and dashed off. Two days later, at their hotel, the boys heard a voice ring out from across the lobby. It was the man, excitedly waving his hand in the air.

Monwabisi was astonished that the man remembered his name – and pronounced it perfectly. He tried to reciprocate, but got stuck on the first letter of the man’s name.

When people pick up chopsticks for the first time, and clutch nothing but air, many get discouraged. But not Monwabisi and Abongile. After several days of unsuccessful attempts, Monwabisi finally, triumphantly, ecstatically loaded a delicious chunk of fried pork into his watering mouth. It was roughly 6:37 p.m. on his fourth day in China. Abongile followed up with a chunk of iceberg lettuce shortly thereafter. Needless to say, both boys will probably begin searching out Chinese delivery options in Cape Town, so as to impress their friends.

The boys had many opportunities for cross-cultural conversations in China. Many went like this.

Chinese high school kid: Do you guys, like, live in the jungle?

Monwabisi: No. We live in buildings. There are buildings all over Africa.

When Abongile and Monwabisi spent a day at a popular tourist attraction – a lake with an old temple on one shore – they also noticed a funny thing happening.

“People were taking pictures of us, and then putting their camera away really fast, pretending like they didn’t just take our picture,” he said.

After this happened a few times, Monwabisi says they came up with a solution. “We started walking up to people and asking if they wanted to have their picture taken with us,” he said. “Most said yes, so we posed with them.”

Monwabisi says the best part of the trip was, by far, meeting other students from all over the world. He and Abongile became good friends with students from the US, Ireland, and Australia – and they of course exchanged contact information.

Monwabisi said he’s hoping to keep in touch with them on Facebook, and perhaps bump into them again at a future chemistry conference. Overall, the experience made him want to travel the world, and keep meeting people.

And the hardest part of the experience? Saying goodbye to his new friends, and thinking he might never see them again.