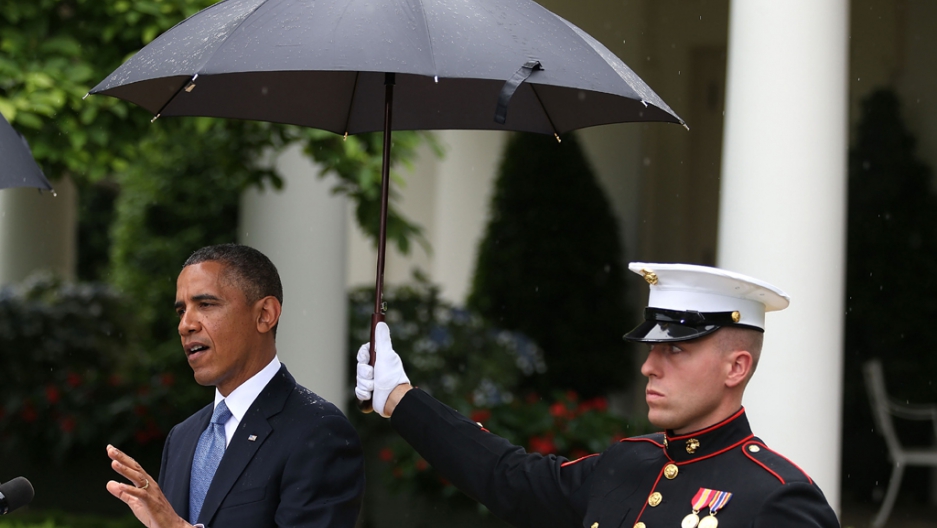 A US Marine holds an umbrella over President Barack Obama as he and Prime Minister Recep Tayyip Erdogan of Turkey (not shown) speak to the media in the Rose Garden at the White House May 16, 2013 in Washington, DC.
Credit: Mark Wilson
Share

More specifically, male Marines aren’t allowed to hold them, but women can hold small black umbrellas in their left hands so they can still salute with their right hands.

It’s a rule that President Barack Obama obviously didn’t know when he asked two strapping young soldiers to hold umbrellas over his head and that of Turkish Prime Minister Recep Tayyip Erdogan on Thursday.

POTUS and the PM held a joint news conference Thursday afternoon in the White House Rose Garden when the skies opened up above them.

“I am going to go ahead and ask folks, why don’t we get a couple of Marines — they’re going to look good next to us,” a joking Obama said. “I’ve got a change of suits, but I don’t know about our prime minister.”

Marine Corps spokesman Capt. Greg Wolf told CNN that Marines holding umbrellas are “extremely rare,” but if the Commander-in-Chief asks for it, you fill the order.

In the interests of journalism, the Washington Post dug up the Marine Corps manual with the reference to umbrellas.

It states: “Female Marines may carry an all-black, plain standard or collapsible umbrella at their option during inclement weather with the service and dress uniforms. It will be carried in the left hand so that the hand salute can be properly rendered. Umbrellas may not be used/carried in formation nor will they be carried with the utility uniform.”

The Post highlighted several conservative and Republican critics who chastised the president for breaching protocol.

Sarah Palin tweeted that “most Americans hold their own umbrellas.”

Scandalous Hat TrickMr. President, when it rains it pours, but most Americans hold their own umbrellas. Today in... fb.me/zAZryzjj