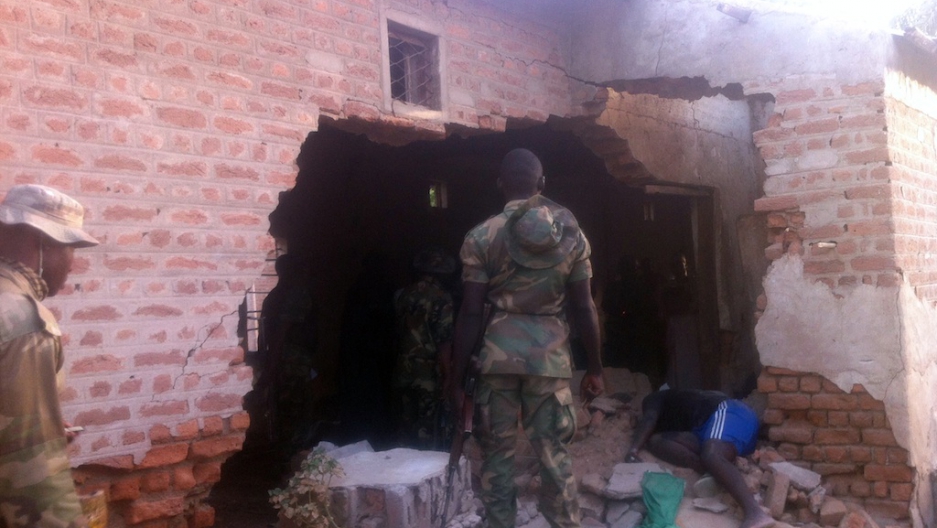 A soldier stands in front of a damaged wall and the body of a prison officer killed during an attack on a prison in the northeastern town of Bama, on May 7, 2013. Nigerian gunmen on May 7, 2013 launched coordinated attacks on military barracks, a prison and police stations killing 55 people and springing 105 inmates, the army said. 'Heavily armed Boko Haram terrorists' launched the attacks around 5:00 am.
Credit: Stringer
Share

The attack on Sambisa Forest Reserve, one of the strongholds of the Islamic militants, began Thursday.

Troops shelled the area with cannons, killing dozens of insurgents, though there was no independent confirmation of the casualties, the Associated Press reported.

Two government soldiers were killed and one injured in a gun battle in Daura, a town in the north, as were three Boko Haram members.

Nigeria's Al Qaeda-linked Islamist militant group has seized parts of the country's northeast, and three states under their control — Borno, Yobe and Adamawa — are currently being targeted by Nigeria's military.

Director of Defense Information Brig-Gen Chris Olukolade confirmed that coordinated offenses against militant camps across all three states are ongoing, with "several" already taken over or destroyed in northern and central Borno, the heart of the insurrection.

The operation is expected to last "as long as it takes to achieve the objectives," he told GlobalPost on Friday, adding that the number of wounded or killed has not yet been determined.

Anti-tank guns, vehicles and other equipment have also been captured, Olukolade said in a later press release. Military personnel are guarding international borders to prevent "escape or infiltration by insurgents," he added.

"Civilians who hide BHT [Boko Haram Terrorists] will put themselves in danger as they will be acting against the public and national interests," said Major General Mobolaji Koleoso, Chief of Civil Military Affairs, in a press conference Friday in the Nigerian capital, Abuja.

President Goodluck Jonathan, who issued an emergency decree in the area, said the Boko Haram violence could no longer be treated as "militancy or criminality" but now amounted to "a declaration of war."

Around 2,000 people are estimated to have died in the region since Boko Haram's insurgency began in 2009, when they attempted to create an Islamic state in the evenly split Christian-Muslim African nation.

The US State Department called on Nigerian forces to respect the rights of civilians over the course of their offensive.

"We call on Nigerian officials to ensure that Nigeria's security forces protect civilians in any security response in a way that respects human rights and the rule of law," State Department spokesman Patrick Ventrell said.

"We have made clear to the Nigerian government that its heavy-handed response to insecurity in northern Nigeria and the failure to address human rights violations will potentially affect our ability to provide security assistance going forward."

More from GlobalPost: 2012 was a banner year for Boko Haram, but not for Nigerians