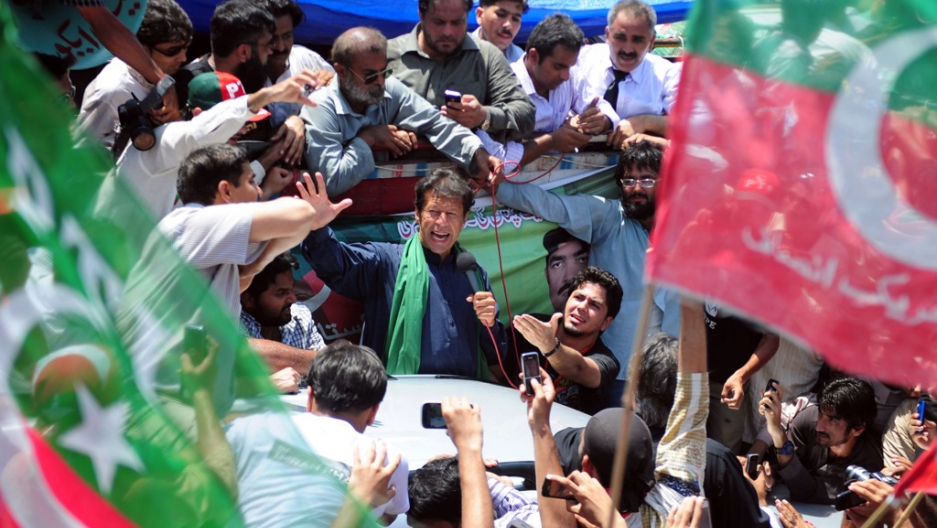 Imran Khan speaks to supporters during a campaign rally in Karachi on May 7, 2013. The May 11, 2013 election of the national and four provincial assemblies marked the first time a civilian government completed a full term and handed power to another, in a country that has been ruled by the military for half its existence.
Credit: Asif Hassan
Share

KARACHI, Pakistan — As the votes were tallied in the days after national elections, Karachi supporters of Pakistan Tehreek-i-Insaf (PTI) — the party best known abroad for its founder, cricketing superstar and playboy politician Imran Khan — learned some unexpected news.

Their party hadn't just failed to win a majority in the country's national assembly. The PTI, which won 33 seats across the country, also failed to secure any assembly seats, provincial or national, representing Karachi. Instead, most of the seats went to the incumbent Muttahida Quami Movement (MQM).

Considering what seemed prior to election day to be a firm PTI base in Karachi, the results didn’t add up. Though Karachi has been an MQM stronghold for the last decade, many new voters arrived at the polls to cast ballots for a different party. Khan had been able to rally supporters who had never voted before in their lives. PTI supporters mobilized to leave their homes and wait for hours in Karachi's hot, dusty streets to cast their votes. Overall voter turnout was a record 60 percent, the highest ever since 1970.

The overwhelming answer, in the minds of PTI supporters: the ballot boxes must have been stuffed in the MQM's favor. Non-partisan election monitors, meanwhile — who had only limited observation in Karachi — said there were “some serious problems in polling."

Supporters of the PTI didn't take the results lightly. For two days following the elections, they filled Karachi's main roads, holding protests and sit-ins. Protests are uncommon in Karachi; although the city has a population of about 16 million, more than 2,000 protestors at any given gathering is unusual. Local media counted an incredible turnout, with thousands of people gathered in the streets demanding a recount.

Pakistan's television stations mirrored the outrage of PTI supporters, broadcasting a continuous loop of videos showing alleged acts of vote-rigging. One clip showed a man running out of a polling station with a box full of blank ballot sheets. Another clip showed voters discovering ballot sheets stamped in favor of PTI tossed on the side of the road.

The government responded to the outcry with a heavy imposition. On day two of the protests, which had remained relatively peaceful, the authorities invoked Section 144 — an archaic law in Pakistan’s penal code that bars gatherings of more than four people in any public space.

Section 144 is supposed to be used to "restore public order" in situations that could easily threaten public safety. It also prohibits people from openly carrying weapons, and is often accompanied by a ban on “pillion riding” — two men riding on a motorcycle together — to limit opportunities for drive-by assassinations.

What's especially interesting about Section 144 is its origin. The law is a holdover from colonial rule, when British lords wrote it into India's penal code to prohibit participation in public gatherings. Somehow, even after Pakistan and India gained independence from Britain in 1947, the repressive law found its way into Pakistan's rule book. It's been used to quell uprisings ever since.

In the last few years, Pakistan's government has been using the law ever more frivolously. Recently, the authorities imposed Section 144 to restrict kite flying in Punjab — arguing that the kite wires were a safety hazard to both pedestrians and motor vehicles. Last year, the government used the law to ban people from smoking hookah outdoors in Karachi (because smoking is harmful).

Such uses of Section 144 aren’t idle threats, either. Generally, no one violates Section 144. After the smoking ban last year, which was to last two months, hookah bars around Karachi were disbanded. Abusers of the law faced up to six months in prison. Today, hookah bars are still absent in most of Karachi.

Human rights activists have long said Section 144 severely prohibits free expression. But the law won't go away any time soon — not when it's a one-size-fits-all tool the authorities can use to take care of everything from public demonstrations to health regulation.

For now, PTI supporters have abandoned Karachi's streets, leaving their complaints in the hands of a tribunal organized by Pakistan's Election Commission. What that investigation will yield remains to be seen.