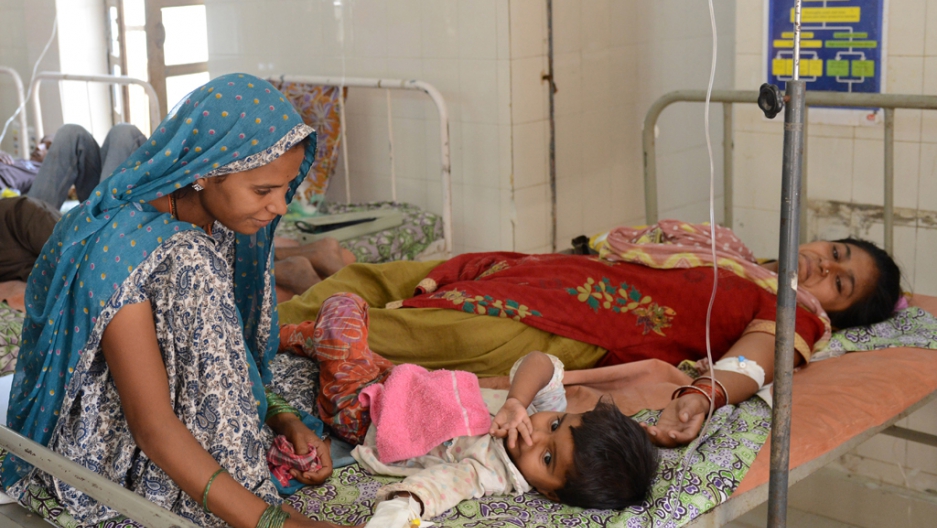 Indian patients suffering from diarrhoea rest in a ward at the Community Health Centre in Dehgam town on May 15, 2013.
Credit: Sam Panthaky
Share

Scientists in India made news around the world on Tuesday when they announced that they had developed a low-cost vaccine that could prevent a severe form of diarrhea caused by rotavirus.

Indian company Bharat Biotech International manufactured the vaccine, in collaboration with the Indian government and nearly a dozen Indian and international partners.

At $1 per dose (for three doses), the oral vaccine Rotavac is a fraction of the cost of existing rotavirus vaccines and could go a long way to reducing childhood mortality. Globally, rotavirus leads to 435,000 deaths of children under the age of 5 each year – an estimated 100,000 of which are in India.

Diarrhea is India’s third leading cause of under-five death, according to the World Health Organization, and scientists say that around 30 percent of diarrhea is caused by rotavirus.

Despite these numbers, India has not yet included rotavirus vaccine in its national immunization program. Nor has India, unlike dozens of other developing countries, applied for rotavirus vaccine support from the GAVI Alliance — the nonprofit organization that funds vaccines for poor countries — even though it is eligible to do so.

Health experts give several reasons for this time lag, including price and the state of India’s health systems.

Rolling out the existing rotavirus vaccines has not been possible in a country where there are competing health needs, and where total health spending per capita is just $54. The previous rotavirus vaccine had been estimated to cost up to $7 per dose (for two doses), and even the bulk of GAVI’s latest negotiated prices are $2.50 per dose for two doses.

“You can also save a lot of lives with other programs with the money it would take to buy these vaccines, and that’s been the big hold up,” said Dr. Johnie Rose, a physician and epidemiologist at Case Western University School of Medicine, who researches rotavirus.

Compounding the problem is that India has some rotavirus strains that existing western vaccines have not been as effective against, Rose added.

GAVI rotavirus vaccine prices had been an obstacle, but the problem extended beyond cost, said Dr. Ajay Khera, deputy commissioner of child health and immunization at India’s Ministry of Health and Family Welfare. To successfully implement rotavirus immunization, he said, India’s health system needs to have the capacity to deliver, monitor, and assess the rotavirus vaccine.

“It is not only getting a vaccine from GAVI and distributing to the public,” he said. “The government of India is absolutely open to taking up any kind of new technology, particularly with the vaccine … but there are certain conditions that need to be fulfilled.”

Among these conditions, Khera said, is additional evidence of the burden of rotavirus in children – including the type of strain the children have and at what age – as well as a surveillance system for monitoring the rotavirus vaccine.

Based on the findings scientists presented Tuesday, Khera called Rotavac efficacious and safe.

Since 2009, the World Health Organization has recommended that the rotavirus vaccine be included in all national immunization programs.

Late last year, the British Medical Journal published a debate between scientists on whether or not India should include the rotavirus vaccine in its own immunization program, a step that it is currently considering. Rose, who co-authored the article in favor of inclusion told GlobalPost that Rotavac is “big news that people have been waiting for, for a while.”

The low price, he explained, would ensure that India, and eventually other countries could feasibly provide the vaccine for its citizens without necessary outside help.

Indeed, Dr. MK Bhan, advisor to the Indian Academy of Pediatrics and former chair of department of biotechnology secretary for the Indian government said that Bharat Biotech aims to work with GAVI and UNICEF to have reach outside of the country. “It’s meant to be for a larger purpose than just India,” Bhan said. In the mid-1980s, Bahn was among the scientists who first discovered the rotavirus strain, and he has worked on developing Rotavac since.

Bhan also said that for the past year, he has been working with the Rotavac team to build a surveillance system for more data.

Jacob Puriyel, head of pediatrics at St. Stephen’s Hospital in New Delhi and co-author of the BMJ article opposing inclusion of the rotavirus vaccine in India’s national immunization program, questioned the promise of Rotavac.

“We need to look after water sanitation and malnutrition before spending [money] on useless vaccines,” Puriyel said in an email to GlobalPost. He does not oppose a vaccination program, he said, but in his BMJ article he wrote that inclusion of the rotavirus vaccine in India’s program “must be based on hard nosed, pragmatic evaluation of the evidence.”

Puriyel said that based on what has been presented, he does not think Rotavac will be more effective in India than what is already out there.

Bhan agrees that there’s no silver bullet for diarrhea management, but he said that “prevention for poor countries is way better than cure.” He added that oral-rehydration salts reach around only one-third of India’s population, and zinc coverage is only around 7 percent.

There may be no panacea for diarrhea, but Dr. Roger Glass, director of the Fogarty International Center at the US National Institutes of Health (NIH) and a longtime collaborator on the Rotavac project said, “vaccines are one of the best buys for child health we have.”

The development of Rotavac is important, too, Glass added, because it is a result of India’s own research and development.

“It's significant that this new vaccine was derived from an Indian strain, identified by an Indian scientist, developed by an Indian Company, studied in Indian populations, with support from the Indian government,” Glass wrote in an opinion piece.

“India is a country that has done reasonably well with generics, but we’ve never had the experience of a start to finish project,” said Bhan, who estimates that development cost around USD$80 million.

Following positive results from the study, Bharat Biotech will apply for licensure from the Drug Controller General of India. Meanwhile, Khera said, “we’ll build our surveillance system, and we will have more learning on this vaccine.”

Glass said that Rotavac could be available as early as the end of 2013.