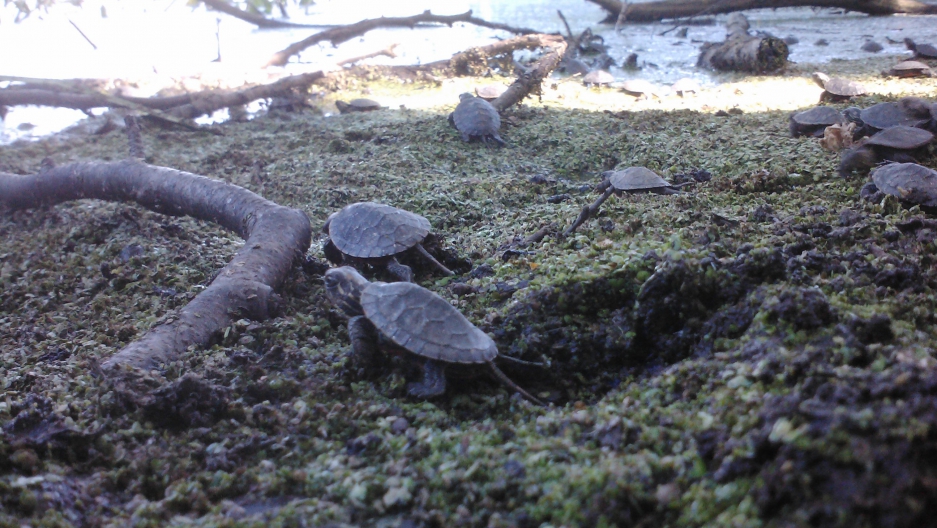 These baby Painted turtles head back to the water after hatching. (Photo by Rory Telemeco.)

Climate change is impacting various animal species around the world, but Painted turtles may face a particularly strange and formidable challenge.

Scientists at the Iowa State University have discovered the species is at risk of becoming all females. Rory Telemeco, a biologist at ISU, says the problem stems from how sex is determined among the turtle species. It's not like how humans' gender is determined.

"In many of these reptiles, such as these turtles, the temperature during development, during a fairly short window of about a month, during the middle third of development, determines whether or not the offspring will be male or female," Telemeco said. "Cool nests producing males and warm nests producing females."

Warmer temperatures means more female turtles — and with this species that's become apparent quickly. But turtles, Telemeco added, have been around for some 200 million years, through temperatures warmer than what we have now. So clearly they're able to adapt.

Telemeco's group set out to study whether nesting earlier might help buffer these turtles against climate change. Already there are signs in the environment of plants and animals moving up their spring time activities. We see flowers blooming earlier. We see leaves bursting earlier on trees. Birds and butterflies are migrating earlier. Frogs are singing earlier.

And, it turns out, turtles are nesting earlier.

"It’s a really common response," he said. "We really wanted to know whether or not that was going to work."

Unfortunately, according to their research, it makes little difference.

"If it’s the only thing that the turtles have at their disposal, to sort of protect themselves from climate change," Telemeco said, "it would only buffer them to about a degree increase in temperature. Any more than that, it would have no buffering effect."

It would also likely lead to high rates of mortality in turtle nests, he said, in addition to a completely female species.

Telemeco said temperatures may rise by as much as four to eight degrees over the next hundred years — an incredibly rapid shift that could make it difficult, or impossible for turtles to evolve in time.

"These turtles are fairly long lived. It takes them five years to be reproductive, and they can continue to survive and be reproducing every year, for another 20 to 25 years, and that rate of generation time really slows the ability of populations to evolve," he said. "It means that you would need dramatic evolutionary changes within just a few generations for them to be able to cope with the types of environmental change we’re predicting."

In order to save the species, Telemeco said, we'll need to drastically reduce climate-changing emissions. But even that may not be enough. Short of that, this species — and others — will only survive with human intervention, to keep their nests cooler in the critical months of gender selection.

"But it’s going to be really difficult and sadly, I really don’t think we’re going to be able to save all of them," he said.