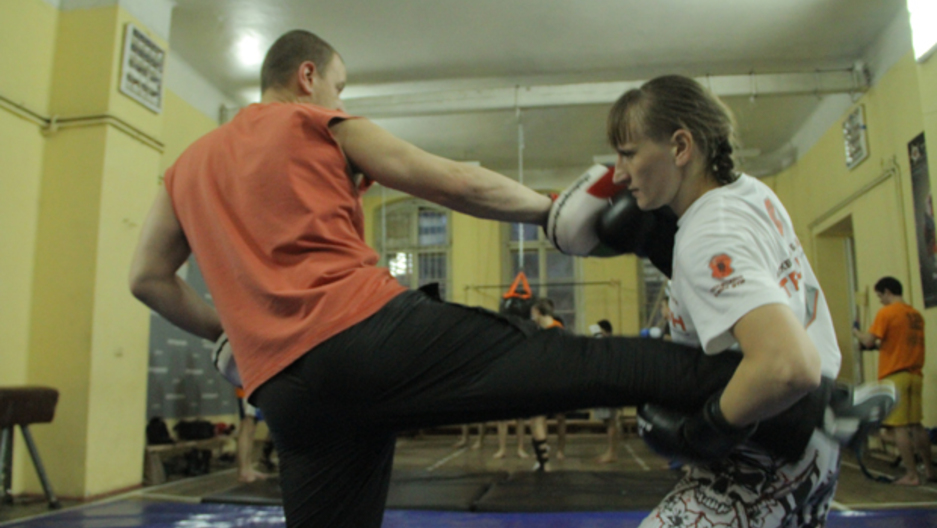 A few years ago, a series of photos by the French photographer Guillaume Herbaut were widely posted on blogs and feminist news-sites on the internet.

In the photos, a group of young women pose with swords, hatchets and nun-chucks in the woods of Ukraine. In some of the photos, they are wearing black T-shirts and loose karate-style pants. In other photos, they are wearing flowing white shirts embroidered with flowers, a traditional Ukrainian outfit. The captions described these women as new Amazons, as in the mythical tribe of warrior women.

The group is run by a woman named Katerina Tarnovska. By day, she is a preschool gym teacher, leading groups of wiggly four-year-olds in a circle around a gym.

In her spare time, the 34-year-old is the leader of Asgarda, a female martial arts group that claims to be a new tribe of Amazons.

Amazons are the mythical, all-female warriors said to have fought in the Trojan War and worked alongside Alexander the Great. They’re famously said to have cut off their left breasts so they could aim their arrows more accurately.

Tarnovska doesn’t believe that. But she does believe the Amazons are the direct ancestors of Ukrainian women.

“If you read the histories, you see that on the territory of the Ukraine lived a group of young women, who came together to support each other in war, it was like a women’s school, where women who liked to fight, they could learn and lead such a life,” Tarnovska said.

And it was high time, Tarnovska said, for Ukrainian women to reconnect with their warrior past.

So in 2002, Katerina began to develop an all-female martial art. It’s based on another recently-created form of fighting called “Fighting Hopak,” but with a special emphasis on self-defense. She pasted fliers all over Lviv, inviting girls to train in the Carpathian Mountains. Word spread and dozens of girls joined.

And they still come, a couple dozen every summer. It’s like camp, Katerina said. Girls do arts and crafts, sing songs around a campfire — and practice martial arts. Katerina gives lectures about Ukrainian history and women’s role in society.

“We talk about who are women and girl warriors, why do they exist? What kind of laws they should follow? How does one become a true warrior? And what kind of women and heroines have lived in the past, and what role they played in our history?” Tarnovska said.

But, Tarnovska stressed that Asgarda is not out to claim anything for women. It’s not a group of feminists. Ukrainian women, she said, have always been equals. Like in mythology, as Amazons, they fought alongside men.

Oksana Kis, an anthropologist and historian in Lviv, said she doesn’t believe in the Amazon myth, but can see the benefits for women.

“Whether or not there is proof of Amazons in Ukraine or matriarchs in Ukraine, if this helps these women to feel better, and develop their self esteem and confidence, why not do it?” she said.

Kis said when Ukraine was part of the USSR, Soviet propaganda instructed women that they were equal to men. In today’s Ukraine, the laws are progressive and in favor of women.

“What Ukrainians always try to do, they always try to find the unique Ukrainian way to do everything, you know, for women’s liberation, for martial arts, for whatever,” she said.

Kis said women make up only 10 percent of the Ukrainian parliament. They’re paid 30 percent less than men with the same jobs. And in some fields, like computers, while men and women study the subject at roughly the same rate, there are hardly any women working in IT.

And this is where Tarnovska thinks her warrior training can help.

In a church basement across town fat, blue gym mats pad the floor. A group of 13 guys and two girls practice hurling each other onto the mats. Tarnovska changes from gold-sparked jeans to thigh-length boxing shorts emblazoned with a hissing viper. She suits up in gloves.

Tarnovska is training in kickboxing and Muay Thai. She spars with her trainer in preparation for an upcoming match.

She’ll teach the moves she learns to her Amazons, she said. And that will help them be better, tougher people regardless of what they do in life.

Or, a preschool gym teacher.