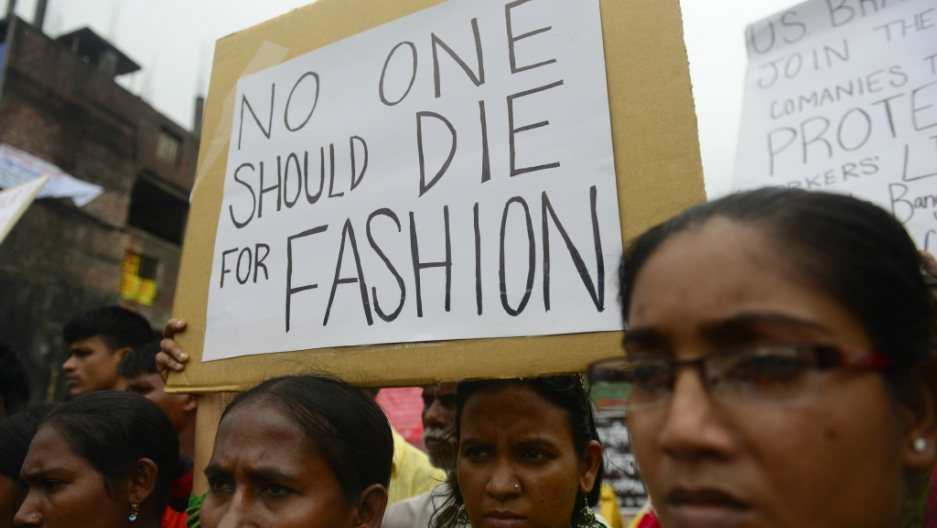 Relatives of Bangladeshi workers who lost their lives in a garment factory disaster gather with banners and placards at the site of Bangladesh's worst industrial disaster. Activists are set to protest across North America and Europe as they attempt to force the clothing retail giants Gap and Walmart into signing an 'Accord on Fire and Building Safety in Bangladesh.'
Credit: MUNIR UZ ZAMAN
Share

It took the death of more than 1,100 factory workers in a single accident for major international retail companies to support improving garment industry labor conditions in Bangladesh.

Since the factory collapse near Dhaka last month, pressure has mounted for retailers to ensure basic safety measures at their suppliers' factories. Some 38 global brands have now agreed to the terms of the draft "Accord on Fire and Building Safety in Bangladesh," made public this week. Gap and Walmart were two notable holdouts.

International labor rights groups have been working with retail companies to draft such an agreement for years,Liana Foxvog, director of organizing and communications atthe International Labor Rights Forum, told GlobalPost.

"Apparel companies need to be accountable for worker safety in Bangladesh," Foxvog said. "The problem is that Gap, JC Penney, and Walmart have not yet been willing to make anything else but voluntary, non-binding promises to worker safety."

Despite some of the big retailer fallout, many labor unions see the recent support as progress. Logos of some companies that have signed on to the Bangladesh accord.

"This accord is a turning point. We are putting in place rules that mark the end of the race to the bottom in the global supply chain," said Philip Jennings, head of the umbrella labor rights group UNI Global Union.

So, what exactly does this "turning point" require of companies?

The deal, which is specific to Bangladesh, binds retailers to ensure independent building and fire safety inspections take place at their supply factories — in a country with only 60 official inspectors, despite its need for hundreds — and to pay for any recommended repairs. Full terms of the draft accord are here.

Walmart, the world's largest retailer, said in a statement that it would conduct its own in-depth safety inspections at its nearly 300 Bangladesh factories, but would not sign on to the accord.

Gap said it would not agree to the accord until its language about handling legal disputes in court is changed. ILRF and other rights groups are planning to protest in front Gap's shareholder meeting May 21 in San Francisco.

Bangladesh is the world's second-largest apparel maker. The $20-billion industry, which relies heavily on female workers, accounts for up to 80 percent of exports.

Cambodia also came under fire for factory safety on Thursday when a partial collapse at a shoe factory killed two people, one of them a minor who had lied about her age to get a germent job. The Cambodian government, well-known for problems with corruption, has vowed to inspect all plants.

The list* of companies who supported the accord, as of Thursday, is below:

*Data compiled by GlobalPost. Blank spaces appear for companies that did not have public figures readily available.