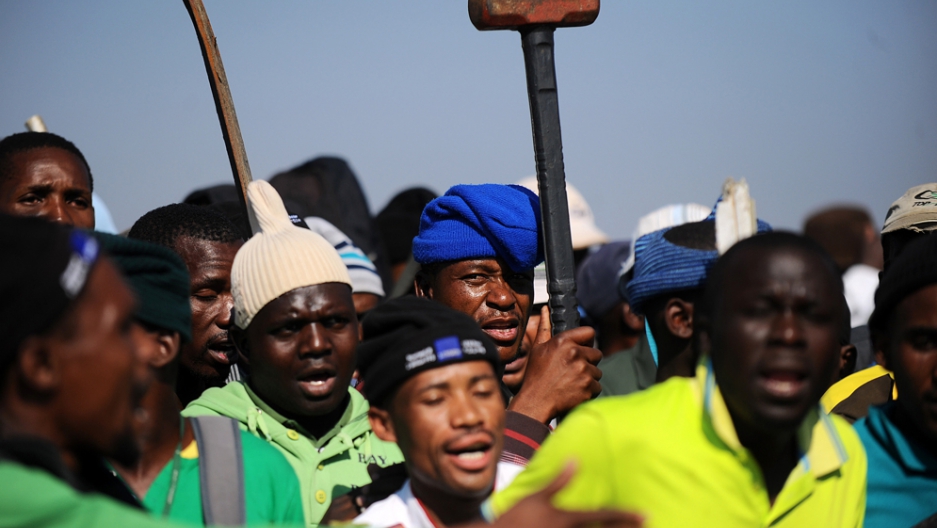 Striking Lonmin mine workers dance and sing as they gather May 15 at the Wonderkop stadium in Marikana during a strike.
Credit: STRINGER
Share

Workers at Anglo American Platinum’s mine near Rustenburg, northwest of Johannesburg, threatened to halt their work Thursday in an unprotected strike to protest job cuts, a day after thousands of miners at the Lonmin-owned Marikana mine ended a two-day wildcat strike related to trade union rivalries.

This latest bout of industrial action has spooked already jittery investors as well as the ruling African National Congress party, which heads into an election year faced with mounting discontent over South Africa’s high unemployment rate and sluggish economy.

The South African rand dropped to a four-year low against the dollar on news that mine workers at Anglo American Platinum, the world's biggest platinum producer, would launch an illegal strike over the company’s plans to cut 6,000 jobs.

The wildcat strike at Lonmin’s mine was sparked by a turf war between rival unions, as well as anger over the murder of a senior union official who was to testify at an inquiry into the August 2012 violence at Marikana. In that unrest, 44 people were killed, including 34 shot dead by police in a single day.

South Africa’s Cabinet on Thursday appealed to union leaders to resolve their dispute, and said it would send a delegation of government ministers to Marikana in an attempt to quell the situation.

Edna Molewa, the acting minister in the presidency while President Jacob Zuma is on a state visit to Russia, said the Cabinet is worried about the effects the unrest could have on the economy, in particular the loss of jobs.

South Africa accounts for 70 percent of the global platinum supply. But platinum mining companies were under pressure even before the strikes and violence, with rising operating and labor costs, falling productivity and low prices all hampering the industry.

The turmoil of last year led to a platinum production deficit for the first time in seven years, and analysts say the market is unlikely to rebound in 2013 with labor strikes in South Africa expected to continue.

The mining unrest is fueled by a dispute between the National Union of Mineworkers, an ally of the ANC, and the breakaway Association of Mineworkers and Construction Union, a more militant group.

AMCU is demanding recognition by management at Lonmin, which said last week that the upstart union now accounts for 70 percent of the workforce at the Marikana mine. AMCU has complained that Lonmin has stalled in granting the union recognition rights.

There could be further turmoil ahead in South Africa’s mining industry, including in the gold and coal sectors, as the country enters “strike season,” when wage negotiations are held.

While workers at the Marikana mine have returned to work, tensions remain high. Lonmin said in a statement that “situation on the ground remains delicate,” and talks with unions are continuing.

On Thursday night in Marikana union members held a memorial for Mawethu Steven, who was murdered at a tavern last weekend in what appears to have been a hit.

Steven’s death was the latest in a number of killings of individuals connected to the unions and due to testify at the Marikana inquiry, though the exact motive has not been proven in any of the cases.

In a statement condemning the violence, Cosatu, the powerful trade union federation, referred to “the current spate of anarchy that is taking place in the mines.”

“We call on all workers in the mine to take the current killings of each other seriously and stop these criminal activities,” Solly Phetoe, Cosatu secretary for North West province, which includes Rustenburg, said in a statement.

“We are making the capitalists to celebrate while our poor working-class people are killing each other.”