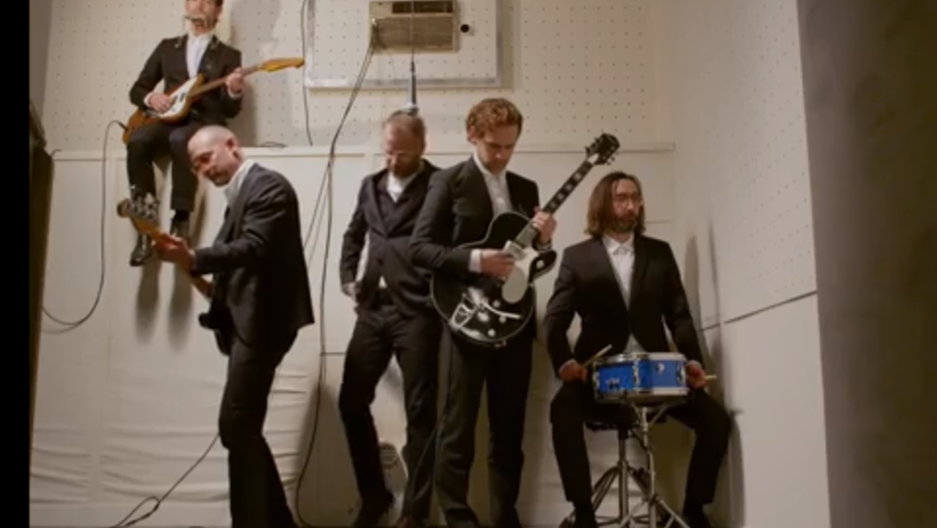 Screen shot from The National's video for Sea of Love

Share
To understand how a Brooklyn band ended up channeling a Soviet era punk band, you have to step into the way back machine for a few minutes. "Punkish. Semi-organized. Often discordant." That is how Martin Walker describes the music of Soviet-era punk rock band Zvuki Mu. Walker was based in Moscow for The Guardian newspaper from 1983 to 1989. He says that in the late 1980's, Zvuki Mu (which translates as "The Sounds of Mu") epitomized a new generation's struggle to throw off the Soviet way of life. "Gorbachev's Soviet Union was a place that was pregnant with change," Walker says. "It was aching to change." Walker first saw Zvuki Mu perform in a worker's cafeteria in a factory on the outskirts of Moscow. "They were somewhere where the new underground art scene, performance art, came together with rock and roll." "There was this sense of a combined frustration and anger with the nature of Soviet life was completely palpable in this youth culture." The music of Zvuki Mu was biting, mocking, and ironic. Walker describes Zvuki Mu performances as "Tolstoy and Bob Dylan meet Sid Vicious in a grimy squat that was part night-club, part-artist's studio." And that was certainly true of the video Zvuki Mu did for a track called Grubiy Zakat, or Rough Sunset. The video embodied all the strange strands the band brought together. It's just the four members in a cramped, white, windowless room – albeit with an air conditioner. They're banging away at their instruments. Lead singer Pyotr Mamanov contorts himself in almost inhuman ways. And the video is one continuous shot. There's no editing. You would think something like this would be lost to the mists of time. But not so, thanks to YouTube. "I fell in love with it immediately," says Bryce Dessner, the guitarist for the Brooklyn-based band The National. Dessner says a friend in France with eclectic music tastes first showed him the Grubiy Zakat video. "We decided we had to do something like this," Dessner says. "We spent quite a lot of time trying to reach them, and specifically trying to reach the singer Pyotr Mamanov. We eventually got an email for his wife, and we wrote to her, but we never heard back." The National pressed ahead anyway. With a new album called "Trouble Will Find Me" about to come out, the band chose one of the singles, a track called "Sea of Love." And, in an homage to Zvuki Mu, The National completely recreated the look and feel of the Grubiy Zakat video, down to the smallest, weirdest detail. "It's all so bizarre," Dessner says with a chuckle. "You're playing in essentially a basement room with the air conditioner, and the guitars are plugged into the air conditioner." "And then, about 30 seconds into it, a small boy wades into the frame and stands in front of the band playing air guitar for the entire song. And that just seemed subversively funny. The National's Bryce Dessner says it took the band eight or nine takes to get it. For Dessner, it was especially tough – because he had to contort himself like Zvuki Mu's Pyotr Mamanov in the original. "I was tasked with the imitation of him, which was not an easy feat. It was quite exhausting actually." Imagine, he says, running a four minute foot-race, over and over, with a guitar strapped to you. Dessner says it was worth it, though. "Making this video was just really fun, a bizarre event for us. And to pay tribute to this Russian punk band that we really like; we're happy some of our fans are discovering their music for the first time for sure." Maybe this is The National's new thing. Recently, they played their song "Sorrow" for six straight hours as part of an art exhibit in New York. Call it the band's "Russian phase."