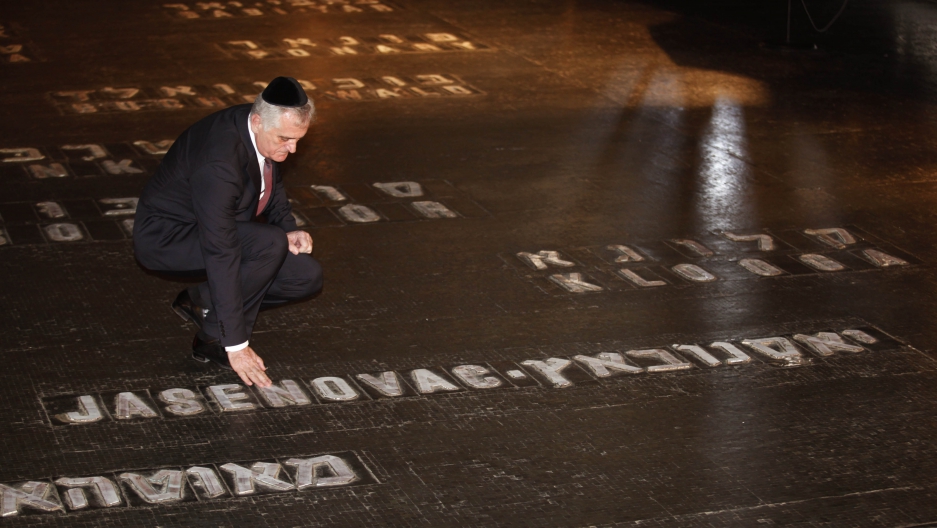 Serbian President Tomislav Nikolic touches the ground with the name of Jasenovac concentration camp during his visit of the Yad Vashem Holocaust memorial, which commemorates the six million Jews killed by the Nazis during World War II, in Jerusalem on April 29, 2013.
Credit: Gali Tibbon
Share

BELGRADE, Serbia — Though he washed the feet of a Serbian Muslim girl in an Italian prison on this year's Holy Thursday Mass, Pope Francis is still not on the road to visit Serbia.

Serbian ecclesiastical and political elite are still waiting for an official papal apology for crimes committed against Serbian Orthodox during World War II, and the pope has never received an official invitation to visit his more than 350,000 adherents in this Eastern European country.

Balkan history considers Roman Catholic clergy responsible for the death of 700,000 Serbs, Jews and Roma killed in the concentration camp Jasenovac, given the church's close relationship with the Nazi-affiliated Independent State of Croatia, as well as the forcible conversions of 240,000 Serbian Orthodox to Roman Catholicism.

”An apology would be a gesture that instills hope that something like that will never happen again," said Patriarch Irinej, the current leader of the Serbian Orthodox Church.

On the Catholic side, Monsignor Stanislav Hocevar, the archbishop of Belgrade, cannot understand why Serbia insists on a special papal apology, citing John Paul II’s apology in 2000 “ for the sins of Catholics throughout the ages for violating the rights of ethnic groups and peoples."

During his visit to Bosnia and Croatia in 2003, the pope also apologized for the crimes of Catholic Croats. He held a Mass at the Petrićevac Monastery in Banja Luka, a place where the Croatian Ustase massacred over 2,500 Serbs in February 1941.

However, Serbian Orthodox Metropolitan Jovan of Zagreb strictly demanded that the Pope Francis pay a tribute to the victims of Jasenovac before he visit Serbia, like Pope Benedict did during his visit to Poland where he paid a tribute to Jewish victims.

When it comes to Jasenovac, the only dealth camp not operated by Germany and the most painful collective Serbian memory of modern history, Monsignor Hocevar stresses that Catholic Church is very active in seeking forgiveness.

"Monsignor Antun Škvorčević has been permanently praying for all Jasenovac victims for years. He permanently seeks forgiveness,” Hocevar said. “The first president of the Croatian Bishops' Conference, Monsignor Marin Srakić, also asked for forgiveness, as well as Cardinal Josip Bozanic."

But he added, “The pope will not visit Jasenovac as long as the Serbian and Croatian sides do not establish an undeniable truth about the historical facts about Jasenovac."

Zivica Tucic, renowned Serbian religious analyst, says that Zagreb and Belgrade formed a joint historical committee to establish the truth about Jasenovac but that it never held a session.

"The past is an excuse for the unwillingness or inability of both sides to step out of our own prejudices," said Tucic to GlobalPost, adding that "neither Orthodox nor Catholics are truly interested in clarification of Jasenovac truth. Each of them has its own version and their own casualties."

Long-strained communication between the Vatican and Serbia was additionally burdened after John Paul II beatified Cardinal Alojzije Stepinac in 1998. The Croatian wartime archbishop of Zagreb was accused of being an active collaborator with the Ustase regime.

In 2011, Pope Benedict paid tribute to Cardinal Stepinac at the outset of a two-day visit to Croatia. It also triggered Serbian rage.

But Pope Francis brings a hope for a radical change in political relations between the Vatican and Serbia. Serbian media describe Francis positively as a person whose name reflects modesty, self-sacrifice and service to others.

Serbian President Tomislav Nikolic showed his political sympathy for Francis by attending the pope's inauguration. But Nikolic was once more radical, supporting anticlericalism as espoused in the book, "Vatican: Satan’s Principal Nest," written by Vojislav Seselj, the former leader of Serbian Radical Party currently imprisoned at the Hague.

Anti-ecumenism is a serious stumbling block not only to the pope's visit to Serbia, but also for the potential unification of Catholicism and Orthodoxy in Christianity. Many Orthodoxies still consider Catholics to be heretics and apostates. Anti-Catholic atmosphere was a crucial reason why the pope did not attended the Jubilee of the Edict of Milan which was held in January 2013 in Nis and was a missed chance for reconciliation, overcoming centuries-long divisions and prejudices.

"Due to the still unsettled issues from the past, there was not yet a sufficient consensus in the public opinion about that visit in a way that it would be really fruitful to both sides," said Archbishop Orlando Antonini, adding that he loves Serbia as his own land.

The Serbian religious expert Tucic was told by the Vatican that the pope does not go where he is not welcome or where he might create strife in the church or the society. Tucic concludes that Serbia is still an immature society for such a visit.