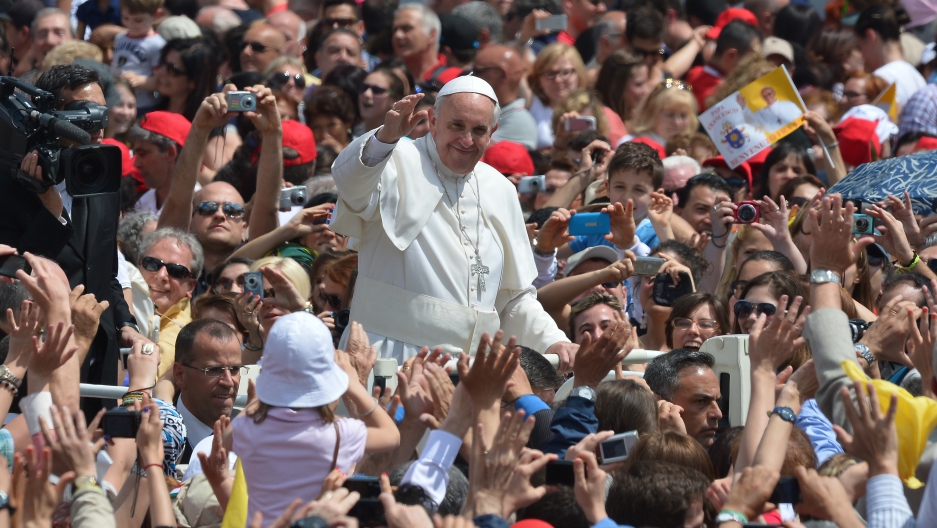 Pope Francis waves to pilgrims on Sunday in St. Peter's Square at the Vatican at the end of a canonizing service, which included new Colombian and Mexican saints.
Credit: Vincenzo Pinto
Share

MEXICO CITY, Mexico — Many Roman Catholics believe their church's future may well hinge on the ability of Pope Francis, an Argentine barely two months into his reign, to revive the faith in Latin America.

That wager was underscored with Francis' canonization Sunday of two very different and long dead nuns — one Mexican and the other Colombian — who together enshrine the church's mission of both defending the faith and nurturing hope in the all but hopeless.

Mexico's Maria Guadalupe Garcia, known as Madre Lupita, and Colombian Laura Montoya, or Madre Laura, both founded religious orders aimed at nurturing the sick and dispossessed. But Madre Laura gained fame despite rejection by the church's clergy, while Madre Lupita won it defending the priests against revolutionary persecution nine decades ago.

A tapestry with the image of Mexico's Madre Lupita hangs in St. Peter's Square.

Both nuns were marked for sainthood last December by former Pope Benedict, who announced their honor on the same day he told the world he was resigning his papacy. But they cherished values many perceive in Francis, a doctrinally conservative Jesuit renowned for his priestly order's personal austerity and concern for the plight of the poor.

The newest Latin American saints join a handful of others from a region that's now home to about 40 percent of the world's baptized Catholics.

Telling of a still eurocentric church, Francis, 76, canonized the two nuns alongside more than 800 Italian villagers murdered by Ottoman invaders in 1480 after refusing to convert to Islam.

“The connection is obvious,” said Ilan Semo, a historian at the Ibero-American University, a Jesuit institution in Mexico City. “He is a pope who has come to re-establish the church in the whole hemisphere. He is going to focus first on Latin America, then on the United States, then Africa and Asia.”

Semo says Latin American Catholicism finds itself losing millions of believers both to more conservative Protestant faiths and to quickly changing societies open to abortion, gay marriage and other trends abhorrent to Francis and the Vatican.

In addition, the rapid growth in Mexico of a cult worshiping Santa Muerte, or Holy Death, with quasi-Catholic masses and shrines rings alarm bells even in the Vatican's chambers. Italian Cardinal Gianfranco Ravasi, head of the Vatican's council on culture, condemned the cult last week as "blasphemous."

"It's not religion just because it's dressed up like religion," Ravasi said in a visit to Mexico, where at least 70,000 have been murdered in gangland wars of the past six years. "Religion celebrates life, but here you have death."

The new pope's challenge will be to embrace the focus on the dispossessed, favored by many progressive clergy and lay Catholics but shunned by the conservative Benedict and John Paul II, while holding the line on bedrock Vatican doctrine, Semo explained.

“His first task is a series of reforms that will allow the church to address social issues again in Latin America,” Semo said.

The Vatican has placed a special focus on Latin America for more than a generation, but Vatican policy marginalized many clergy and lay members dedicated to progressive social causes.

Mexico was one of John Paul's first foreign destinations as pope and he returned frequently through his 27-year papacy. Benedict flew into conservative central Mexico in March last year for a two-day visit. Francis, in the only foreign trip he's planned for this year, will spend a week in Brazil in late July, speaking to a youth conference and visiting slums and prisons.

Apart from their individual qualities, Catholic saints have traditionally been employed as messengers from the church to the faithful. So Lupita and Laura's canonization sends an important message about the role of women in the church's future, said Manuel Olimon, a priest and noted Mexican authority on church history.

“This emphasizes the importance of women for the evangelization of Latin America,” said Olimon, who after years of teaching now serves as a parish priest in a small rural town on Mexico's Pacific coast. “These are women of strength and value, disposed to take risks.”

Madre Laura is the church's first saint from Colombia, an overwhelmingly Catholic country. Working with isolated and poor indigenous communities in the early 20th century, she often clashed with the church's hierarchy, even as she grew in popularity.

A woman prays to an image of Madre Laura, Colombia's newly canonized saint.

The religious order she founded, the Congregation of Missionaries of Mary Immaculate and St. Catherine of Sienna, commonly known as the “Lauritas,” now works across Latin America and in Africa.

Mexico’s Madre Lupita was born into a more prosperous family in Zapopan, a city on the edge of Guadalajara known today for its imposing cathedral as well as the base of some of the country’s more notorious gangsters. Like Laura, Lupita as a young women helped found a religious order focused on providing care to the poor.

But Lupita also was more closely tied to the conservative Catholic clergy of western Mexico. She gained honor and fame in the Guadalajara region for helping hide fugitive priests during the bloody persecution of the church by Mexico's revolutionary government in the 1920s.

Twenty-five of Mexico's 31 saints are priests and lay Catholics executed by soldiers in western Mexico during the so-called Cristero rebellion of those years. The 25 were canonized by John Paul in May 2000.

That was just six weeks before the political party founded by the revolution lost its seven-decade grip on Mexico's presidency to a party closely identified with conservative Catholicism.

The Institutional Revolutionary Party, or PRI, returned to national power in December with the inauguration of President Enrique Peña Nieto, a practicing Catholic.

But things have changed. Mexico re-established diplomatic ties with the Vatican two decades ago and PRI politicians have been flocking to the Vatican this spring to meet with Francis.

At the new saints' canonization on Sunday, Francis told tens of thousands of gathered faithful that Madre Laura would help give a "new missionary and evangelizing impulse to the church" while Madre Lupita would intercede on behalf of the "poor, the sick and those who assist them."

Both women, the pope said, would help bring peace to their violence-racked homelands. And both offer examples of the values the Vatican hopes to stress worldwide for spiritual and secular freedom.