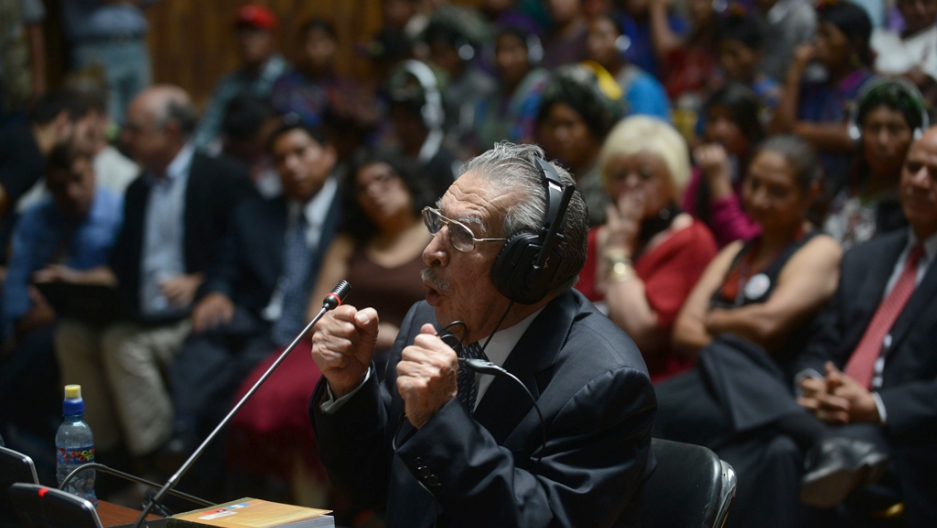 GUATEMALA CITY, Guatemala — Elena Caba waited more than 30 years for justice after she was raped and left for dead in a river alongside her neighbors during Guatemala’s bloody civil war.

She was 9 when soldiers stormed her indigenous Ixil Maya village near Chajul in Guatemala’s western highlands and pulled her and her father out of their home before torching the town to ashes on April 3, 1982.

That was just weeks after US-backed dictator Efrain Rios Montt rose to power.

Troops forced Caba to her knees on the edge of a bridge, next to other villagers that state forces had taken captive, shooting them and hurling them into a stream below.

“They opened me up and raped me,” Caba told GlobalPost. “Then they took me to the bridge and threw me off it. They shot my dad, but he didn’t die at first, so they shot him three more times and threw him off the bridge too. I just laid there face down and pretended I was dead so they wouldn’t shoot me.”

Rios Montt was convicted of genocide and crimes against humanity last Friday, the first time a former head of state has been found guilty of genocide in his country’s own national courts.

The 86-year-old was protected for years from prosecution as a congressman by a law that grants immunity to public officials, but he was arrested in January 2012 after he stepped down from the legislature and ordered to trial in January this year.

He was sentenced to 80 years in prison when judges deemed him responsible for conceiving a brutal “scorched earth” military offensive during his 1982-83 rule that killed at least 1,771 members of the Ixil indigenous group and forced thousands more into exile.

Soldiers raped and tortured unarmed Mayan men, women and children on Rios Montt’s watch and he did nothing to stop the slaughter, the court said.

During his rule, the army exterminated 5.5 percent of the indigenous population in the country’s Ixil region, but killed just 0.7 percent of the nonindigenous residents in the same area, according to expert testimony from the trial.

After decades of waiting, Ixil members have found solace in the conviction.

“I feel lighter, like a giant weight has been lifted off my shoulders,” Caba said.

“Thank God that judges finally recognized that there was genocide here.”

Guatemala’s civil war ignited in 1960 after powerful US business interests grew concerned over plans for land reform in the Central American country that threatened to redistribute key commodity territory.

US forces trained a small, local militia to overthrow a government viewed as communist, initiating a string of military dictatorships that leftist guerrilla fighters fought for decades to topple.

In the 1980s, then US President Ronald Regan publicly backed Rios Montt, calling him “a man of great personal integrity” who is “totally committed to democracy.” Former President Bill Clinton later apologized for the support.

The conflict ended in 1996 when rebels signed peace accords with the state. But decades of war left deep scars on a profoundly divided society and, among some, a sense of distrust with the United States.

The trial brought up old emotions as victims purged tales of suffering before judges and the public, while the old military establishment denied that genocide ever happened, calling judges “partial” and accusing them of succumbing to international pressure.

“It was a war and there were excesses by both sides,” Ricardo Mendez Ruiz, whose father, an army coronel, was kidnapped for 51 days by leftist fighters in 1982, told GlobalPost. “But there was never genocide here.”

Mendez Ruiz’s Foundation Against Terrorism published three 20-page newspaper supplements during the trial titled “The Farce of Genocide in Guatemala,” detailing what it described as atrocities committed by rebels and accusing prosecutors of politicizing the trial. He said the inserts were a response to the intense international pressure to convict Rios Montt.

Guatemalan President Otto Perez, the first military man to rule the country since the war’s end, has also denied genocide and said the verdict will harm the country’s image and stymie foreign investment.

But human rights advocates have insisted that the conviction brings a necessary balance of power to a country that is dominated by the military and big business and has provided victims with an essential platform to tell their stories.

“In order for peace to exist, we must first have justice,” judge Yasmin Barrios said during her verdict reading. “We firmly believe that recognizing the truth helps heal past wounds. We don’t want acts of this nature to ever happen again in Guatemala.”

Guatemala suffers from staggering inequality and its mostly poor indigenous population has long been marginalized by the country’s power structures.

Nobel Peace Prize Laureate and activist Rigoberta Menchu, who, like many, was forced to flee to Mexico during the war, said the trial helped empower indigenous communities.

“This is their space too,” Menchu told reporters in a courtroom full of Ixil men and women. “They have no reason to remain silent and with this verdict it is recognized that they are free to have their voices heard. Let them speak. Let them tell their stories.”

The trial, which began on March 19, got dirty at times and exposed some serious weaknesses in Guatemala’s justice system.

Judges fought over jurisdiction and one sought to completely annul the trial. Defense lawyers stormed out of proceedings in protest and threatened judges in public hearings without any penalty for misconduct.

The conviction has been seen as a blow to Guatemala’s powerful oligarchs who are widely viewed as untouchable.

The United States has applauded the court’s ability to bring the trial to a conclusion despite setbacks.

Guatemala has been fighting to curb crippling levels of impunity. Under the direction of crusading Attorney General Claudia Paz y Paz, who was appointed in December 2010, conviction rates have hit record highs, reaching nearly 6,000 criminal sentences in 2012.

But the military is still a powerful force in a country struggling to overcome rampant violence. Many citizens have placed their trust in the army over the police and civil society groups.

The genocide verdict must still withstand a windstorm of pressure from war veterans and legal appeals and injunctions that have already begun to blow in.

The conviction of Rios Montt, who spent two nights in jail before being transferred to a military hospital, may never repay the grave damages done to vulnerable indigenous villages, but it has brought a brief sense of relief and a feeling that injustices can be punished.

“For a long time we have wanted justice and this is good.” Elena de Paz, an Ixil rape victim who testified against Rios Montt during the trail, said in an interview.

“He won’t suffer like we did," she added. "He was able to defend himself with lawyers before a panel of judges, but the justice he did to us was with sticks and machetes. He will never feel that.”

More from GlobalPost: Guatemala sentences ex-soldier to more than 6,000 years