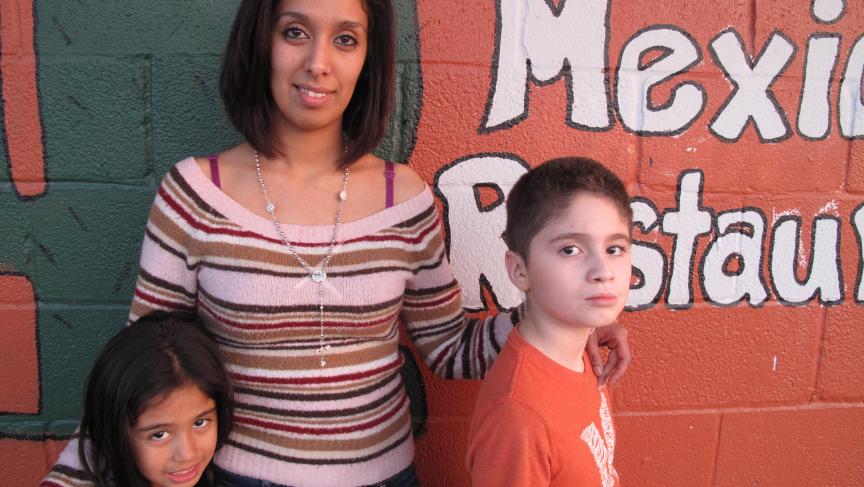 Carina Vega and two of her children in front of the Mexican restaurant where she now works. (Photo: Anna Boiko-Weyrauch)

Butchering chicken and meat is dangerous, low-paying factory work, and it leans heavily on immigrant workers, sometimes illegally so. Just like farm work, immigration reform could change this industry dramatically, from granting workers legal status to offering temporary work visas. At the same time, some immigrants are deciding to move on from such tough work. Anna Boiko-Weyrauch reports from Missouri.

In a small apartment in Noel, Missouri, seven roommates from Somalia get ready for the night shift. Siido Jama fries up meat and onion sambusas, a stuffed pastry. Next, she’ll head across the river to a poultry processing plant run by Tyson Foods and work until early morning.

Jama says America has been good to her. Tyson wages start at $9 an hour and English is not required. But the work is repetitive anddangerous and employees cycle through plants quickly. If Jama becomes injured or finds another opportunity, another immigrant worker would likely step in to replace her.

"The poultry industry has been one of several industries that has had the clear experience that it needs foreign-born workers or access to foreign-born workers as part of its workforce," explains Doris Meissner, a senior fellow at the Migration Policy Institute, a non-partisan think tank in Washington, DC.

Immigrants and refugees are the ones flocking to work here, not locals.

At 4:30 p.m., cars arrive at the plant to drop off night shift workers wearing flowered skirts and hijabs. All told, they total around 1,500 employees, coming from Africa, the Pacific, Latin America and Asia.

At some meat plants, workers are hired illegally, prompting anincreasing government crack down. In 2001, Tyson was charged with smuggling in workers from Mexico and was later acquitted.

Now the food industry is lobbying Washington to make it easier to hire immigrants legally.

In February this year, National Chicken Council President Mike Brown testified on behalf of food manufacturers. "We seek workers who will stay on the job to become skilled and efficient," he told Congressional representatives.

Legislation before Congress would grant millions of immigrants legal status, if it passes. It may grant visas to more guest workers and extend rights such as minimum wage levels and mobility like never before. New rules would allow workers to switch jobs instead of being tied to one employer.

That is a breakthrough and "gives workers leverage," Meissner says.

While it is unclear how pending legislation would play out in the workforce, for now many immigrants say they'll continue doing the tough work of cutting, deboning and packing poultry.

In her living room, Irma Brown, who migrated here from Guatemala, demonstrates her trimming job at the Tyson factory. First grab the carcass, flip it, hack off the wings—repeat. She does this for hours every day.

Brown is proud of her work, which has enabled her to buy and house and support her children and grandchildren. But years of fast repetitive motion have worn down her wrists and arms.

Brown has had three surgeries for carpal and cubital tunnel syndrome, but her hands still cramp up in the night and prevent her from closing her fingers. The pain keeps her from sleeping. During the day she loses her grip and will suddenly drop plates of food or cooking pots on the floor.

Micronesian worker Merlina Manuel says she works in freezing temperatures packing chicken breasts into foam trays at a rate of 60 to 70 per minute.

"If the order is really big and the time is really short then they make it fast," Manuel says. "Sometimes we really shout and say, 'What's going on?' But we do what we have to do."

Processing line work could intensify under new rules proposed by the Department of Agriculture aimed at containing harmful food-borne bacteria. The proposal would decrease food inspectors in factories, speed up processing lines and save food companies money. Advocates worry that already notorious worker injuries will increase.

Tyson spokesman Gary Mickelson says the company's policies prevent injuries. "We care about our employees, we value them, we want to make sure their safe on the job ... The right to a safe workplace is part of our team member bill of rights."

But some immigrant workers want out.

Carina Vega worked without legal paperwork at chicken plants for years, after migrating from Mexico. Now, she and other ex-poultry workers run a new Mexican restaurant across the street from the Tyson plant. Vega says she needs both hands to raise her kids, feed them and do their laundry, so she can't afford to hurt her hands.

"We came to work," she says in Spanish. "If they treated us a little bit better, a little more human, there wouldn't be any problem."

For now though, Tyson and other food companies will count on someone else, perhaps another immigrant, to fill Vega's spot.