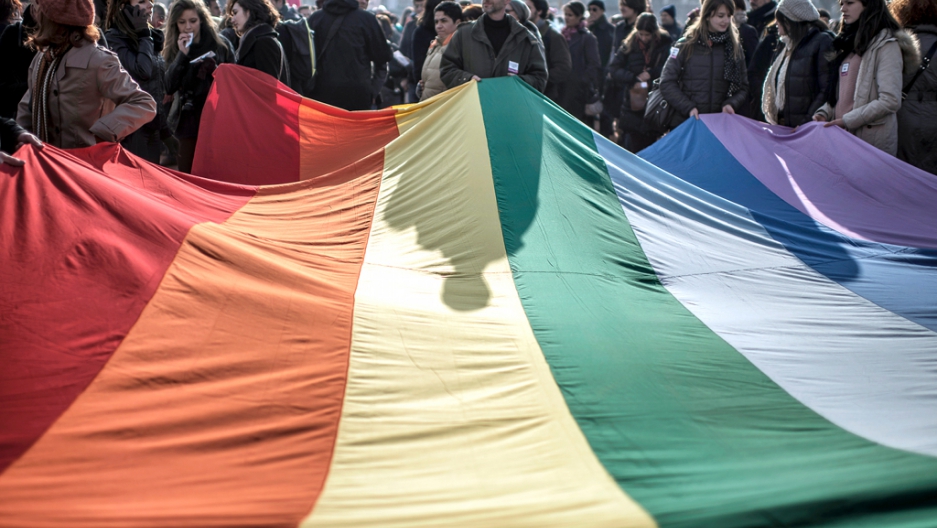 People hold a giant rainbow flag during a demonstration to support gay marriage and adoption in Lyon, France.
Share

A transgender woman in Hong Kong has won the right to marry her boyfriend, after Hong Kong's Court of Final Appeal ruled 4 to 1 that restricting her from doing so was unconstitutional.

The woman, who has been identified to the public only as "W," underwent a state-subsidized sex change operation a few years ago but has a birth certificate that still identifies her as biologically male, according to the BBC.

More from GlobalPost: Gay men and lesbians in China marrying to stay in the closet

The judgement discounted public consensus on the matter, noting that “whether a consensus regarding a transsexual’s right to marry exists among the people of Hong Kong is not a relevant consideration," according to the South China Morning Post. The importance of procreation in the modern marriage contract “has much diminished," it added.

"I may have [been] born a man but after transgender surgery at a government hospital more than five years ago, I've lived my life as a woman and been treated as a woman in all respects except as regards my right to marry," said W, the South China Morning Post reported. She added that the new decision "rights the wrong."

"Why should we put them in such limbo when the sex reassignment surgeries were sponsored and approved by the government?" said Hong Kong Human Rights Monitor director Law Yuk-kai to AFP, of the legal status of transgendered people.

"Most jurisdictions have recognised their acquired gender and ensure they will be able to lead their way of life including the right to have a family."

Although Hong Kong doesn't yet recognize same-sex marriage, the permissive ruling has given advocates some hope, wrote the Wall Street Journal.

Waiwai Yeo of the Women Coalition of Hong Kong told the Journal that about 200 people in Hong Kong have been documented as having undergone sex change surgery, although she suspects the number is much higher, as many go to Thailand to undergo the procedure.