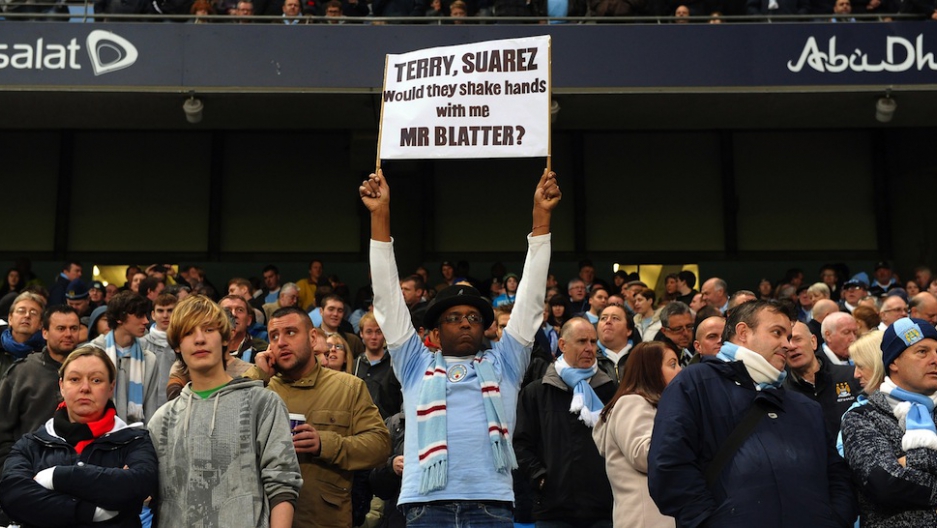 A Manchester City fan displays a banner with a message for FIFA President Sepp Blatter about his handling of recent allegations of racism in football on Nov. 19, 2011.
Credit: Paul Ellis
Share
#reactionDiv_gig_containerParent { display:none; }

Racism has long plagued soccer in Italy and other European countries, with several top teams followed by groups of supporters who engage in racist chanting during matches. Some of the fans are aligned with neofascist groups.

On Monday, Sepp Blatter, president of world soccer organization FIFA, pledged his commitment to ending racism in the sport.

Appalled to read about racist abuse in Serie A last night. Tackling this issue is complex, but we’re committed to action, not just words.

Italy's case is particularly disturbing since soccer authorities and some politicians often seem unconcerned, insensitive to questions of race or even openly racist.

In January, Milan's Kevin-Prince Boateng and his teammates left the field after racist abuse during a match.

Paolo Berlusconi, brother of former Prime Minister Silvio Berlusconi, used the word "negretto" to describe Balotelli after AC Milan signed the black Italian striker in February. The word roughly means "little black boy" but its translation varies depending on use and context.

"Let's go watch the family's negretto," Paolo Berlusconi said at a meeting of the conservative party led by his brother. Silvio Berlusconi is owner of AC Milan, Paolo the club's vice president. Paolo Berlusconi later said the comments were "affectionate.

Balotelli's name also came up in a recent outburst by Italian politician Mario Borghezio, whose Northern League party was an ally of Berlusconi during most of his time in government.

Asked about the appointment of Congolese-born Dr. Cecile Kyenge as Italy's first black government minister last month, Borghezio said black people could "kick a ball" like Balotelli but were not qualified for other jobs.

Paolo Di Canio, a former star with top Italian team Lazio, is a self-proclaimed "fascist" who has Dux, a latin title associated with Italy's World War II leader Benito Mussolini tattooed on his arm. During his playing career he raised controversy by giving the stiff-right-arm fascist salute to fans during games.

Last week, the Task Force Against Racism and Discrimination, chaired by FIFA Vice President Jeffrey Webb, held its first meeting to discuss "the application of sanctions in cases of racist and discriminative acts."

A draft resolution is expected later this month, but the task force already publicized its sanction proposals. Depending on the severity of the offense, they may include matches played without fans, a club's expulsion from a competition, point deductions, or relegation to a lower league.

“One of the opportunities this task force has is its vast reach throughout FIFA’s 209 member associations, where we can implement the resolutions in every region and every country where football is played, bringing universality to the mechanisms that combat racism and discrimination," Webb said.

FIFA isn't the only soccer regulatory body taking a stance against racism.

Last week, the Union of European Football (UEFA) proposed a minimum 10-match ban on players found guilty of racial abuse. And on racism in the stands, UEFA General Secretary Gianni Infantino said there will be “full closure of the stadium and a minimum fine of $65,500."

Despite team rosters now being filled with players from all over the world, and ever-increasing diverse fan bases for teams like Manchester United and Real Madrid, soccer still struggles with racial abuse in Europe, the Middle East and elsewhere.

But many have become aware this is not only a sports issue — it's a problem for societies that have permitted racism to continue, one that can't be solved by sanctions from athletic authorities.