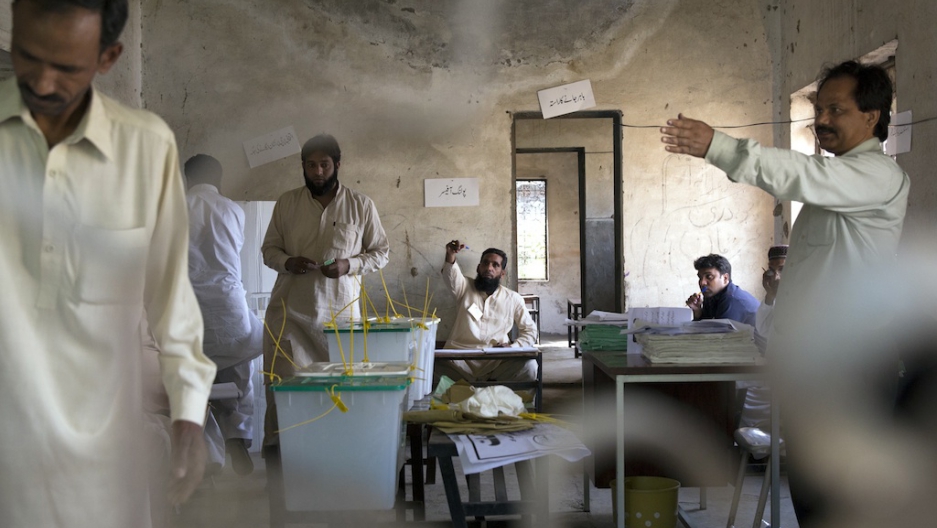 KARACHI, Pakistan — Election day is over. Nawaz Sharif's PMLN party has grabbed the most seats and he's poised to become the nation's newest prime minister. The Election Commission of Pakistan claimed the day was a success for the most part, but free and fair elections were not held in Karachi.

As a first-time voter heading to the polls, I had no idea what to expect. This is Pakistan, after all, and I'm a pessimist.

What I didn't expect whatsoever was to struggle to vote in the first place. The Election Commission of Pakistan — a government appointed agency that had been planning the details of yesterday — was supposed to have been on top of everything. They'd supposedly ordered extra security at sensitive polling stations, and had released information about the voting process.

I got to my polling station in the morning, hoping to cast my vote before the throngs of people showed up to wait in the blistering heat. Instead, I had to wait 45 minutes past the appointed time for my polling center to open.

Though the election commission's representatives should have checked the sites prior to election day, the station didn't have enough rooms to accommodate the amount of voters registered to vote there. There was also no electronic database to check voter registration, so each voter had to be found manually inside a cheaply printed registry.

My most frustrating moment came when the presiding officer in my room only handed me one ballot. When I asked for the other, she told me I only needed one. Calmly, I explained that I was supposed to vote for two separate candidates — one in the national assembly and one in the provincial. She nodded slowly.

"Do you think the green ballot box is only for the green papers?" she asked me.

I wanted to hit my head against the wall.

By 10 a.m., news of the disorganization in Karachi had spread. Many people arrived at their designated polling centers, only to be told their location had been changed. One woman told me that she knew her ballot wouldn't be counted.

"Apparently you can't fold them horizontally," she told me. I nodded sympathetically — it was true. If you didn't fold your ballot correctly, the vote wouldn't count. There were no instructions on how to do this anywhere, and none of the agents at the polling station seemed to know either. This wasn't the only way to accidentally invalidate your vote: If you smeared the blue ink that your thumb was covered in onto your ballot sheet, your vote wouldn't count either.

Three people were already dead at this point. Two bombs had exploded in a neighborhood of Karachi, shaking the community to the core. Numbers of that region's voter turnout hasn't been reported yet, but I'm sure that it wasn't half as high as it could have been. The death toll from that bombing would climb to 12 before the day was over.

A friend of mine told me that when she went to vote (after being redirected from her polling place), she realized that there were not half as many employees as needed to get the job done. So after voting, she sat down and began inking thumbs for people. No one seemed to care that a non-vetted girl was working inside the polling station.

Many friends of mine talked about how they had been intimidated by workers from various political parties while in their voting room. They hovered over them, threatening to hit them if they didn't vote for that party. Television stations aired cellphone footage of men stuffing ballot boxes with multiple papers.

In the posh Karachi neighborhood of Defense, people waited in line all day to cast their votes. The doors to this station never opened. They were voting for a hotly contested seat, one that had previously gone to members of the MQM party, which has controlled most of Karachi for the last decade.

Mobilized by Imran Khan, these voters had showed up in spates to vote for the cricket superstar. They never got the chance. Earlier today, the ECP explained that the polling agents and staff had been threatened. If they left their homes, they were told, they could expect never to see their families again. So they didn't.

At other locations in the same district, ballot papers, ink, stamps, or boxes had gone missing. The ECP claimed that "criminal elements" were responsible — no more specifics were given.

When the polls had officially closed all over the city around 8 p.m., it seemed the disaster in Karachi didn't really matter at all. More than half the seats up for grabs in the National Assembly came from Punjab, Pakistan's most populous province. The 20 seats that Karachi offered weren't in the position to make or break anything.

Residents of NA 250, that disastrous constituency where so many people didn't get to vote, will be able to vote again today. Now that they know that the party they overwhelmingly supported, PTI, has no chance of winning the elections — will they even show up?