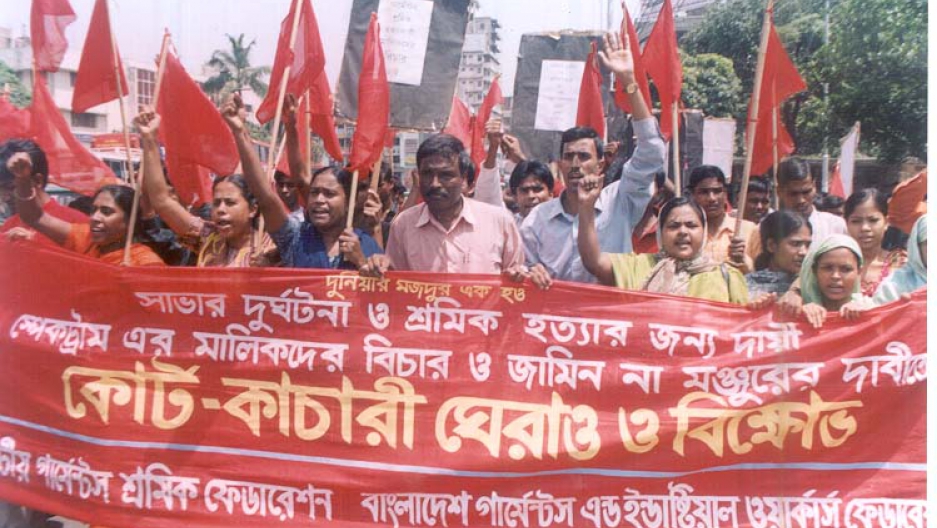 After a 2005 accident killed workers in Dhaka, Bangladesh, locals protested for better safety measures and working conditions. (Photo by dblackadder/Flickr.)

In a remarkable turn of events Friday, a woman was pulled, alive, from the rubble of a Bangladesh factory that collapsed more than two weeks ago.

The woman, according to The New York Times, is named Reshma and she was in the basement when the building collapsed. She was able to access food and water, which lasted for 15 days — saving her from the fate that befell many other trapped workers.

A fire Wednesday in a different garment factory there killed at least eight more people. Between the building collapse and the fire, about 1000 workers have perished in tragedies that have made Bangladesh very uneasy about its recent economic successes.

But even as rescue workers were pulling bodies from the wreckage of the garment factory, workers continue to operate in squalid conditions. Small changes, though, could make all the difference.

The growth in manufacturing in Bangladesh over the past decade has changed the society and underscored real weaknesses in government institutions and regulations.

Muhammad Yunus, an economist, founder of the Grameen Bank and a Nobel Peace Prize recipient, is speaking out to try and make changes.

"It's a terrible thing that has happened to this nation," he said. "It's a total collapse of the system."

Yunus argues that Bangladesh needs to decentralize its manufacturing. But the country is one of the most densely populated places in the world, and with a weak central government, Yunus said, there's lots of corruption.

And zoning isn't even a thought.

One suggestion, Yunus said, would be to require the international garment buyers to pay a minimum wage — of $0.25 per hour. A pittance in the United States and the rest of the west, but a major step forward for these employees. This would, he said, eliminated what's little more than slave labor in Bangladesh.

"Another suggestion I was making — that whatever price you are paying on your end, on the consumer end, something you're buying for $35 will now have a $0.50 extra (charge), $35.50," he said. "This $0.50 is going to a trust fund here in Bangladesh. And this $0.50 would enormously change the whole situation."

Still, Yunus doesn't want to see the textile industry go away — he just wants to see it improved. So the working conditions for the employees get better.

"The consumers have to say 'we don't want our products to be made by slave labor. We make them happy labor.' Then it's solved," Yunus said.