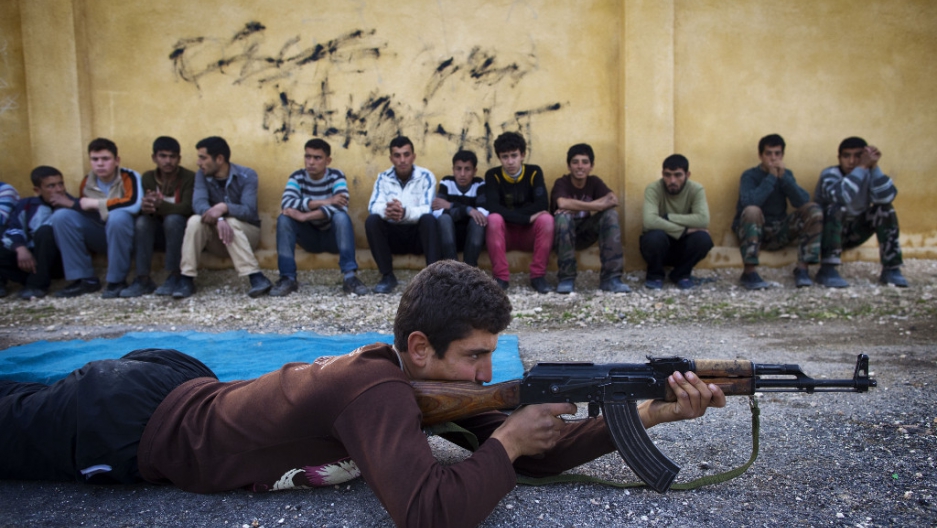 Syrian youth Sobhi, 15, holds an AK-47 assault rifles as he takes part in a military training on January 23, 21013 at a former school turned into a 'military academy' in Tlaleen in the northern Syria's Aleppo province.
Credit: JM Lopez
Share

BRUSSELS, Belgium — A man looks deep into the camera and pleads, in Arabic: “You, there in Europe, watching this video. I’m calling you.”

With urgency in his voice, he refers to children being murdered and women being raped at the hands of the enemy.

“We really need you here. This is your opportunity for paradise.”

“Paradise” via the distinct possibility of death on a Syrian battlefield, he means.

The man is calling for recruits to join the Al Nusra Front, an Al Qaeda affiliate that makes up part of Syria’s fragmented armed opposition fighting the government forces of President Bashar al-Assad.

As unappealing as that “opportunity” may sound to the average European, the message has resonated with hundreds of youths here who have disappeared from their schools and homes and turned up in Syria.

Most are lifelong Muslims, while others are recent converts, a shocking number of them just teenagers, reportedly as young as 15.

Teenage Western recruits in Syria’s uprising throw yet another complex layer on the country’s 2-year-old civil war, which has killed more than 70,000 and displaced millions more. As it is, Western powers are grappling with how best to aid rebel groups that are fighting alongside extremists to replace Assad’s regime.

It’s also stirred communities here in Europe where authorities are on alert for any signs that residents are drawn to violent extremism.

The International Center for the Study of Radicalization, a London think tank, estimates as many as 600 Europeans have made this journey for jihad, with one of the largest contingents coming from Belgium. Belgian authorities estimate the number to be possibly as high as 80 individuals.

Among them is Jejoen Bontinck, an 18-year-old from Antwerp. His story has been grabbing headlines in recent weeks because his father, Dimitri Bontinck, is now in Aleppo in a desperate search for him, posting dramatic updates on Facebook.

The father has said his son was “brainwashed” by members of the outlawed Islamist organization Sharia4Belgium who befriended him in a city park.

Brian de Mulder, a 19-year-old also from Antwerp, is known to be there too, also drawn in by the shadowy group.

When family learned he was in Syria earlier this year, they held a joint press conference with the openly anti-Muslim Belgian nationalist party, Vlaams Belang, calling on the government to do more against Sharia4Belgium and its ilk.

They weren’t the only ones.

Two 16-year-olds from the Brussels suburb of Schaerbeek went missing for a few hours during their school’s Easter break. They then called their parents from Turkey to say they were headed into the Syrian war zone.

The mother of one of the teens flew to Turkey immediately, coming back to Belgium days later heartbroken, with no information about her son.

With little or no contact with their kids, families are left scouring Al Nusra public relations videos, looking for confirmation their children are still alive.

Such YouTube videos were one of the first signs of proof the Europeans were there fighting with the Islamists, says Hicham El-Mzairh, an Antwerp city councilor with Muslim roots who knows several of the young men who’ve gone.

El-Mzairh points to a video, posted by a group he says is an offshoot of Al Nusra, of a firefight in which two of the young gunmen speak to each other in Dutch with what El-Mzairh describes as an unmistakable Antwerp accent.

Also unmistakable is the fact the two Flemish youth are rather new to this lifestyle, scrambling awkwardly up sand banks with their weapons.

“Abu what's-his-name,” one says, in Dutch, addressing the other, before remembering his colleague’s new name. “Abu Basir,” he goes on, “only shoot when you see them.”

While this exchange in Dutch has earned a few chuckles — and even its own Facebook page — the larger picture is dead serious. These young men are now instructed in techniques to kill, instilled with a hatred of the West, their home countries. Their families want them home; the rest of society isn’t so sure.

Threat of their radicalized return

Europol, the European police network, has just released its annual threat assessment, showing officials are taking stock of this problem.

The police force has noted “increasing numbers of radicalized [European Union] citizens traveling to regions of conflict to engage in terrorist activities,” Europol Director Rob Wainright wrote in the report.

“There is growing awareness of the threat posed by these people, should they return to the European Union intent on committing acts of terrorism,” he added.

Next door, the Netherlands has already ticked its national security level up a notch specifically because it learned so many Dutch residents had gone to the Syrian battlefields.

El-Mzairh, long active in Antwerp’s large Muslim community, says the alarm is justified. Long before the exodus to Syria raised new concerns, he’d been warning city leaders that Islamic radicals were making use of schools and parks to recruit young Belgians by exploiting a weak sense of community and inadequate guidance from old-fashioned imams in practicing tolerant Islam integrated with European norms.

“If we don’t give them answers, they go to the internet,” he says, where they “become hypnotized” by the likes of Al Nusra. “The biggest recruiter is the internet, it’s YouTube.”

And now, El-Mzairh says, the stringent Islam they’ve embraced to “fill the emptiness,” as he describes it, is “also asking them to kill people that try to stop them. So they’ve got a holy book in one hand and a weapon in the other.”

The Belgian government is at a loss over how they can be stopped. Border controls should be strengthened, most people agree. Another suggestion is to take away identity cards from those deemed vulnerable to extremist influences, so they can’t leave the country.

Schaerbeek Mayor Bernard Clerfayt scoffs at that idea, even after the two teenagers who were schoolmates of his own children ran away to Syria. His town is half Muslim, half Catholic or other religions, and he says there’s no way he’s going to punish the entire Muslim youth population for the acts of relatively few.

“It’s impossible,” Clerfayt says, “to know which kids want to go to Syria. The two who did leave recently showed no signs they would do it.”

What Clerfayt has done, controversially, is to shut down some of the free food distribution services at the local train station. Clerfayt says he learned there was radical Islamist propaganda being handed out with the meals and believes this connection may have been the link between the young teens and Syria.

While he’s received some criticism for the move, Clerfayt says the vast majority of his municipality’s Muslim population is grateful.

“They say, ‘That’s not the way we live our religion here,’” he said. “They are happy if I protect their kids from that form of radicalism.”

Clerfayt says tips about extremists hanging around the mosques came from the members themselves. This kind of localized warning system is what is being attempted on an EU-wide scale with the Radicalization Awareness Network, or RAN.

The program is spending nearly $10.5 million per year to link up community members from schools, religious institutions, health care and other sectors throughout the 27 member states, encouraging dialogue and exchange of best practices as well as training them how to identify signs of radicalism before an individual becomes dangerous.

European Commission spokesman Michele Cercone is realistic about the program’s chances for success. “It’s not that we’ll have concrete results in the short term nor that we’ll probably convince those that are already radicalized or who have extremist views to change their mind,” Cercone said. “But we certainly can plant the seed of doubt.”

Hicham El-Mzairh agrees that grassroots prevention is the only hope to identify those who may turn on their own families and communities. But he says this is going to be harder than the conventional “war on terror” the public is familiar with, because you can’t see it coming.

“They are our kids,” he said. “They don’t have beards; they have gel in their hair. They are talking about Beyonce one day but the next day jihad in Syria.”