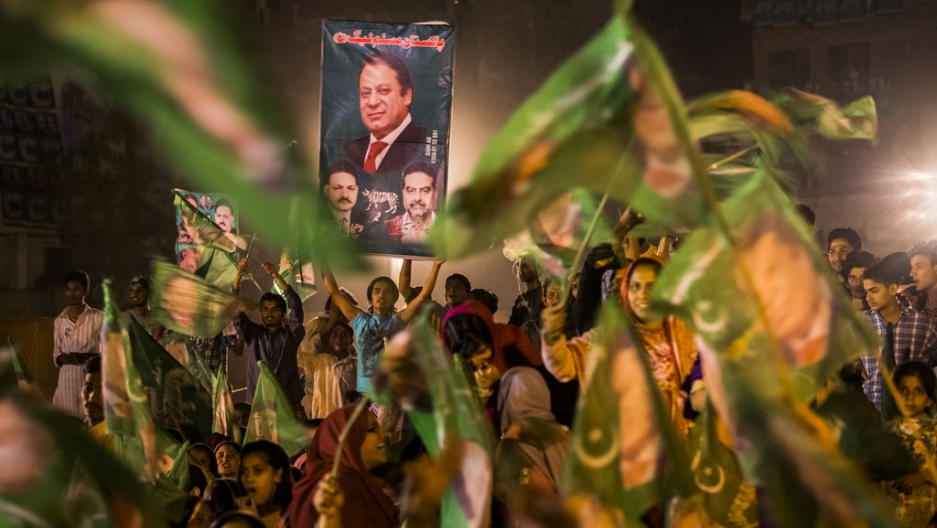 Supporters wait for the arrival of Nawaz Sharif, leader of the Pakistan Muslim League-N (PML) party, during the final day of campaigning at an election rally on May 09, 2013 in Lahore, Pakistan. Nawaz held his final rally in his stronghold city of Lahore.
Credit: Daniel Berehulak
Share

KARACHI, Pakistan — Pakistan is gearing up for elections that are being hailed as the country’s first-ever democratic transition, but the ongoing political violence will likely overshadow the May 11 vote.

According to local media tallies, more than 100 people have died in elections-related attacks since late April, when campaigning for the general election that will choose Pakistan’s parliament began.

The leader of the Pakistani Taliban (Tehrik-i-Taliban, or TTP), Hakimullah Mehsud, said on Thursday that anyone who votes is in danger of being attacked. And with bombs exploding at party offices, rallies canceled, and the son of the former prime minister kidnapped two days before the vote, Pakistanis are questioning the wisdom of heading to the polls on Saturday.

Some politicians are actually campaigning from abroad.

More from GlobalPost: Pakistan: A deadly fight for rights

“What’s the point of pretending that we have democracy when all over the country people are too scared to even leave their homes?” said Ahsan Carpenter, a student in Karachi, Pakistan’s largest city and financial center.

Analysts had initially said this election would be the freest and fairest vote in Pakistan’s history — one with international election monitors and military security. If successful, it would also mark the country’s first transition from one democratic government to another.

But the election season has so far proved to be one of the bloodiest in Pakistan’s history, and it’s marring the process.

Over the last few weeks, TTP militants have carried out near-daily attacks on political party offices, corner meetings — where candidates sit and engage with potential voters on the streets — and public rallies.

The TTP, a militant Islamist organization that is separate from the Afghanistan Taliban, has been working to topple democracy in Pakistan for the last decade.

The militants, many of whom sought refuge in Pakistan following the US invasion of Afghanistan in 2001, frequently attack Pakistani state institutions and have demanded that the government stop drone strikes, impose Shariah law, and reject all US influence and funding.

In the week before the election, a bomb in Pakistan’s Khyber Pakhtunkhwa province killed six people and injured at least 60 more. Last Saturday, twin explosions rocked the office of a popular political party in Karachi, killing three and injuring another 35.

The Pakistan People’s Party (PPP) — a center-left party that takes a hard-line stance against the Taliban — has stopped most of its outdoor campaigning, and its chairman is politicking from abroad.

Without mass rallies, they are using social media, online advertising and paid television spots in order to campaign.

“We have to fight the mindset that is hampering the nation's progress,” PPP Chairman, Billawal Bhutto Zardari, said in a video message to his supporters. “We have to defeat the ones who whip women, bomb mosques and deprive girls like Malala Yousufzai of education.”

More from GlobalPost: In Pakistan’s tribal region, a woman runs for office for the first time

The PPP says its coalition — with the Awami National Party (ANP) and the Muttahida Qaumi Movement (MQM) — has been sidelined because of the attacks, while more conservative or center-right parties like the Pakistan Muslim League and Pakistan Tehreek-i-Insaaf have been spared, most likely because they’ve promised to negotiate with the Taliban.

The Pakistan Muslim League is the party of former two-term prime minister, Nawaz Sharif. Tehreek-i-Insaaf is the brainchild of cricket superstar-turned-politician, Imran Khan.

Khan has a fractured spine after falling headfirst from a forklift that was raising him to a stage at a recent rally.

But it’s not just the halted campaigns that can sully the vote.

If there is violence in the morning Saturday, voters will be discouraged from showing up at the polls later in the afternoon, according to Pakistan’s Free and Fair Election Network, which monitors elections and mobilizes voters.

Outside of Karachi University, one of the largest in the city, many students said they were still unsure whom they planned on voting for, especially since they didn’t know whether the vote will be held.

“I know that [Army General] Kayani has said that the elections will happen at all costs,” said Mehreen Beg.

Ashfaq Parvez Kayani, Pakistan’s army chief, has said more than 10,000 troops will be deployed across the country to ensure security on election day.

“But there’s really no point in researching the candidates until Friday — because who even knows if the candidate I choose will be alive, or whether the elections will happen.”

Several provincial candidates and one national candidate have indeed been killed this campaign season.

Other students said that they were unlikely to venture out on election day, particularly after Saturday’s deadly bombings in Karachi.