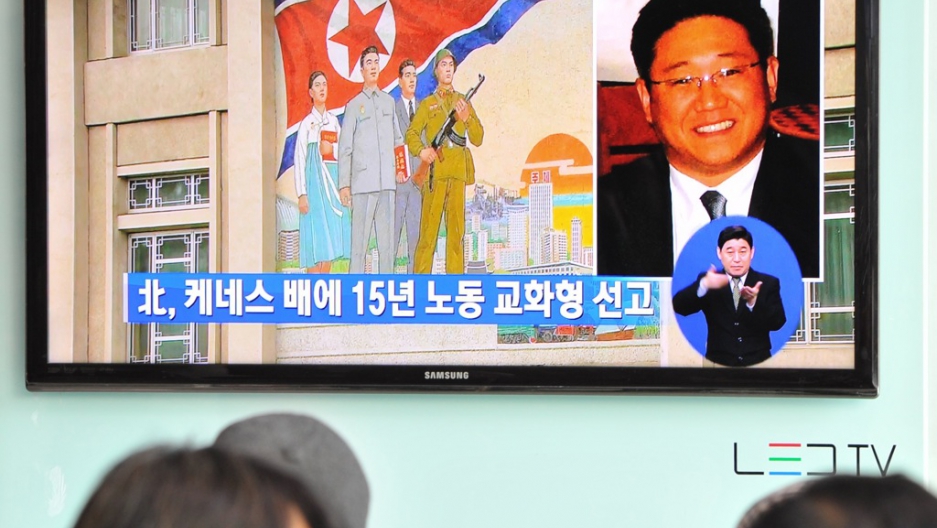 Passersby watch a local television broadcast in Seoul on May 2, 2013 showing a picture of Kenneth Bae (R), a Korean-American tour operator detained in North Korea. North Korea said on May 2 it had sentenced Bae to 15 years' hard labor for 'hostile acts', stoking tensions with the United States.
Credit: KIM JAE-HWAN
Share

American prisoner Kenneth Bae was head of a Christian mission that aimed to overthrow North Korea's regime, Pyongyang has claimed.

In the first public comments on Bae's alleged crimes, a Supreme Court spokesman told state news agency KCNA that the US national had plotted "Operation Jericho" for at least six years before he was arrested in North Korea in November 2012.

The operation, apparently named in reference to the biblical city whose walls were toppled by the sound of the Israelites' trumpets, supposedly began in the US, South Korea and China long before Bae made his fateful trip to North Korea.

Working with evangelical organization Youth With A Mission (YWAM), Bae is accused of preaching against the North Korean government in American and South Korean churches, of setting up covert "plot-breeding bases" in China, of smuggling at least 250 of his supporters into North Korea under the guise of tourists, of producing anti-North Korea propaganda and bringing it into the country.

More from GlobalPost: Was Kenneth Bae in North Korea as a Christian missionary?

The "propaganda" included a copy of a secretly filmed National Geographic documentary called 'Don't tell my mother that I am in North Korea,' according to NK News, translating from Korean-language reports. Bae also allegedly had with him a book titled '1.5 billion in China and North Korea, the world's last closed nations,' NK News said.

Bae was tried behind closed doors on April 30, the North Korean statement said, during which hearing he "admitted all his crimes." The Supreme Court sentence him to 15 years' hard labor rather than the maximum penalty – life imprisonment or even death – in recognition of his confession, the report said.

North Korea made its statement to address allegations by the US that Bae did not receive a fair or transparent trial, KCNA stated.

But analysts in Seoul say that many questions remain unanswered. For instance, why did North Korea wait six months to release the details of the so-called propaganda that authorities found on Bae, and put him on trial? Why was the timing right after its two-month round of war bluster, which started in February?

Finally, why did North Korea allow Bae – who they probably suspected was a Christian missionary – to enter North Korea, when they could have taken the usual route of simply denying him a visa?

This case appears far more complicated and less clear-cut than the 2009 arrests of Laura Ling and Euna Lee, who crossed illegally into North Korea from China and were apprehended by guards, and later released thanks to a visit by former US president Bill Clinton. This time, the regime says it will not use Bae as a bargaining chip for negotiations. President Jimmy Carter – a common guest of Kim Jong Il – has said through a spokesman that he has no plans to visit.

Geoffrey Cain contributed to this report from Seoul, South Korea.