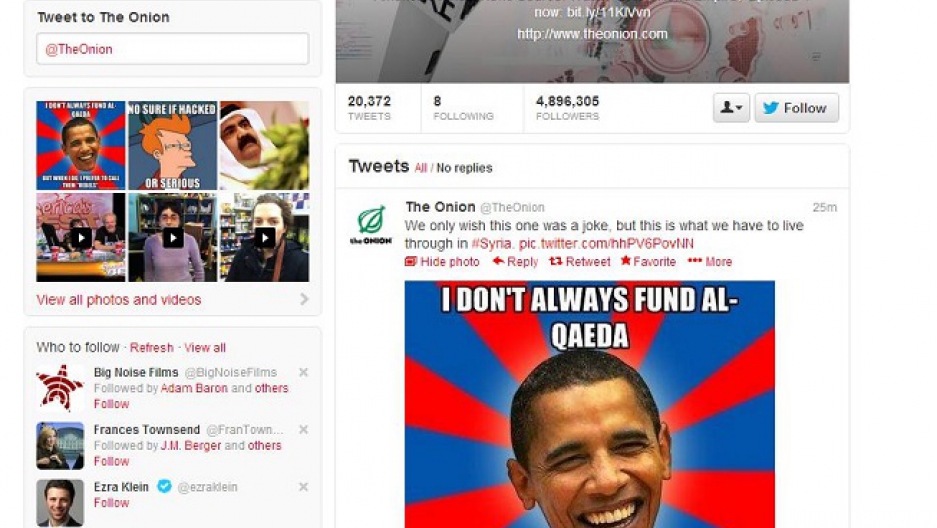 The Onion's Twitter timeline after it was hacked by the Syrian Electronic Army. The photo tweeted by the hackers is a meme style picture featuring the face of President Barack Obama stating, "I don't always fund al-Qaeda but when I do, I call them "rebels".
Credit: Screengrab
Share

Boasting some of the highest profile social media hacks in history, the Syrian Electronic Army (SEA) has stricken fear into the IT departments of the world’s most respected English-Language news outlets.

The SEA has seized control of Twitter accounts belonging to the Onion, the Guardian, the Associated Press, NBC News, NPR and the BBC, bringing their often unpopular perspective of Syria’s civil war to millions of readers worldwide.

But who are the individuals that make up the Syrian Electronic Army? Are they simply al-Assad regime lackeys tasked with embarrassing the western press or independent hackers with an agenda of their own?

“We don't support any single person, we support Syria as a nation,” said an SEA representative to GlobalPost on Wednesday. "We are not pro-Assad, we are pro-Syria.”

As Salafist groups like Jabhat al-Nusra continue to edge out the country’s more moderate Free Syrian Army, the SEA fears an Islamist takeover of the religiously diverse country at the hands of foreign fighters funded by foreign donors.

The SEA’s primary objective is to bring that perspective of the war to western audiences.

“The SEA is engaging in the media war, defending Syria against disinformation championed by very large media outlets,” the SEA representative said. “[Salafists] are demolishing everything that symbolizes secular Syria and its strengths, by inciting sectarian violence, destroying places of worships and infrastructure, from historical bridges to hospitals, schools and universities.”

The SEA isn’t alone in those concerns.

US and European officials have expressed their own fears that weapons provided to the Free Syrian Army, specifically shoulder mounted surface to air missiles, could fall into the hands of al-Qaeda linked groups like Jabhat al-Nusra.

In December, the Obama administration classified al-Nusra as a terrorist organization. Months later, al-Nusra publically declared its “allegiance” to al-Qaeda in Iraq, making the prospect of military aid to the Free Syrian Army even less likely.

According to Phil Sands, reporting for Emirati publication The National, one Syrian rebel commander claims that US Intelligence officials are increasingly searching for information about Jabhat al-Nusra. Frustrated with the west’s highly polarized view of the conflict, the commander lamented the obstacles al-Nusra presented for the opposition.

"All anyone wants is hard information about al-Nusra, it seems to be all they are really interested in. It's the most valuable commodity you can have when dealing with these intelligence agencies," the commander told the National.

Syrian President Bashar al-Assad has accused the country’s opposition of having links to terrorist groups since protesters first took to the streets in 2011. It’s a point the Syrian Electronic Army, as well as the Obama administration, now at least partially agree on.

The SEA, however, differs from al-Assad and does not cooperate with Hezbollah, a longtime ally of the Syrian regime and a US designated terrorist organization.

“The Syrian Electronic Army values its integrity above all and so while many of us admire the effort by [Hezbollah], we have no means to vouch for any group or any members claiming to belong to them. Thus there is no cooperation between us and there won't be in the future due to this issue,” a SEA representative said.

Even if the SEA operates independently of the al-Assad regime, something that cannot be confirmed, the opposition’s most damning accusation against the SEA is their alleged efforts to gain access to activists’ personal information online. Their opponents say the SEA routinely turns that information over to the Syrian military.

Activists also claim that the military then arrests, detains and sometimes kills opposition figures using the information provided by the SEA.

The SEA denies these allegations, claiming that such “rumors” are part of a disinformation campaign designed sully their reputation among Syrians and online.

“We don't have the man power or resources to find the location of any terrorist to aid the military, nor do we have the necessary connections for that matter,” said the SEA representative, using the term “terrorist” to refer to opposition fighters. “These rumors are generated constantly to undermine and demonize the Syrian Electronic Army, but they've proven ineffectual.”

While the SEA claims to have a wide base of support inside Syria, other prominent hackers and internet denizens are decidedly against them, accusing them of being lackeys for Iran and the al-Assad regime.

“It's a misconception that those fighting the terrorists are necessarily pro-Assad. Syrians will settle our internal political issues alone, after we win this bloody war,” said the SEA representative.

In spite of the relative unpopularity in the west, the SEA still hopes that their hacks will prompt hackers and online activists to at least consider their perspective instead of immediately dismissing it.

“The more Americans (who contrary to common stereotypes are the most open-minded people) and other western people know the truth about this vicious war on Syria, the sooner it can end in a peaceful resolution and our people's victory,” said the SEA representative.

The SEA is reaching out for support among hackers and online communities in spite of their low esteem. At the very least, the SEA speaks the same language as the internet, holding the lulz in high regard. Whether their intentions are malicious or genuine, in search of common ground, providing the lulz is the best place to start.