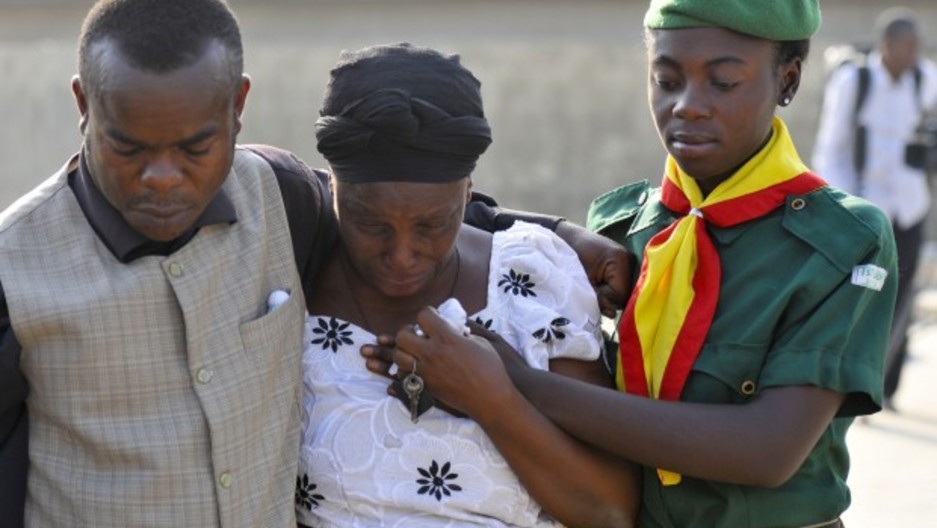 A woman is consoled by church members as she grieves near the graves of victims of a suicide bomb attack during a memorial service at St. Theresa's Church in Madalla, on the outskirts of Nigeria's capital Abuja, December 23, 2012. Boko Haram has killed hundreds in its campaign to impose sharia law in northern Nigeria and is the biggest threat to stability in Africa's top oil exporter.This Christmas, the police and military are expecting more trouble in the north. They've ordered security to be tightened, people's movement restricted and churches to be guarded.But such is the commitment to religion in a country with Africa's largest Christian population that millions of people will pack out thousands of churches in the coming days. It is impossible to protect everyone, security experts say. Picture taken December 23, 2012. To match story NIGERIA-CHRISTMAS/ REUTERS/Afolabi Sotunde (NIGERIA - Tags: RELIGION CIVIL UNREST) - RTR3BVS8

Share
Security forces in northern Nigeria are rounding up and executing dozens of civilians in an effort to wipe out the Islamic militant group Boko Haram. Adam Nossiter of the New York Times has just returned from the northern Nigerian city of Maiduguri, where he's seen first-hand the government assault on the militant Islamic group and the toll Army tactics take on innocent Nigerians. "So the military has carte blanche to do whatever it wants," Nossiter says. "And whatever it wants is to simply go into neighborhoods and roundup and kill anybody who might potentially be a Boko Haram member or sympathizer. It kills by the dozen, and this is not something that it hides with any particular degree of care." Boko Haram translates literally into the phrase "Western education is a sin." The militant group aims to create an Islamic state in Nigeria's north.