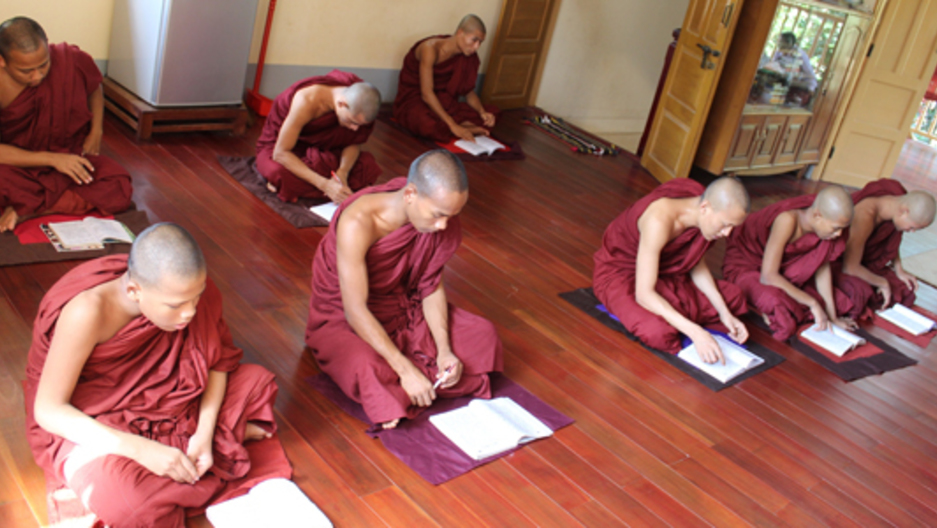 Somewhere around 85 percent of Myanmar's 50 million people are Buddhist—the third-highest concentration in the world after Thailand and Cambodia according to the Pew Forum on Religion and Public Life.

If you wander into any monastery in Myanmar, there's a good chance you'll hear chanting coming out of an open window.

The scene at Maggin Monastery in Yangon is replicated around the country: Young, novice monks sit on the floor, cross-legged on mats, leaning over open books, their fingers following the lines as they recite.

The lack of unison isn't an accident. Everyone's reciting different passages from the collection of texts that make up the cannon for Theravada Buddhism – the predominant type practiced in Southeast Asia and Sri Lanka. They're all at different stages in their lesson. Reciting out loud tests their ability to focus on their particular text.

Not surprisingly, it can be hard for a bunch of teenage boys to focus. Thammikesa is 19-years-old; he's been a novice for the last eight years–students can become full monks once they turn 20. He says from time to time during the lessons, his mind wanders. Sometimes he's happy with the routine, but other times it's a bit boring.

And that routine starts early. Novice monks at Maggin wake up at 5 am and make breakfast for the senior monks. There are morning lessons and cleaning up. By 9 they're out on their daily alms walk.

Monks marching single-file on morning alms walks are a common site around Yangon. Sometimes they're announced by lay people leading the way with a gong and megaphone. People come out of homes and shops to put offerings into the monks' bowls.

Monks get most of the day's food on these walks. Giving alms is a way for lay people to get merit, and for monks to stay in touch with the world outside of the monastery. Nandathara is another novice at Maggin. When asked if he has friends outside of the monastery, he says the people he visits every day on his alms walk are his friends.

When they get back from gathering alms, novices eat lunch and rest until 1pm, when afternoon lessons start.

Buddhist boys in Myanmar are expected to spend at least a little time in a monastery. They learn the basics of the faith and earn merit–a kind of spiritual credit that will benefit themselves and their family in this and future lives. Those who stay longer do so for a variety of reasons–religious devotion or family expectations. For poor families, it can be a way to provide room and board and education for a son.

Nandathara is 19, and has been a monk since he was 7. One of his early reasons for joining was superficial. "When I was younger, I really just liked wearing the robes-I thought I looked handsome in the robes," he says through an interpreter. "After I grew up a little, I started to like learning about Buddha's thoughts and teachings. That's kept me here."

Sometimes it runs in the family. Thammikesa, for instance, is the nephew of Maggin's head monk.

We ask them what the hardest part of monastic life is. Tammikesa, likely aware that his uncle is nearby, laughs and squirms a bit, avoiding the question at first. Finally he says that, even in a monastery, temptation is hard to avoid. Sometimes all he can think about is finishing lessons so he can watch TV.

Soon, Thammikesa and Nandathara will face a choice. They're both a few months shy of 20, the age when novices can be ordained as full-fledged monks.

Thammikesa is conflicted. "When I look outside and see people my age laughing and playing, I want to go join them," he says. "But when I spend time with senior monks, I want to stay a monk. I can't decide."

When we finish talking, Thammikesa wants to get a picture of the three of us. As I get into my car, he's leaning over the second floor balcony smiling and waving. I'm curious to know what he decides.