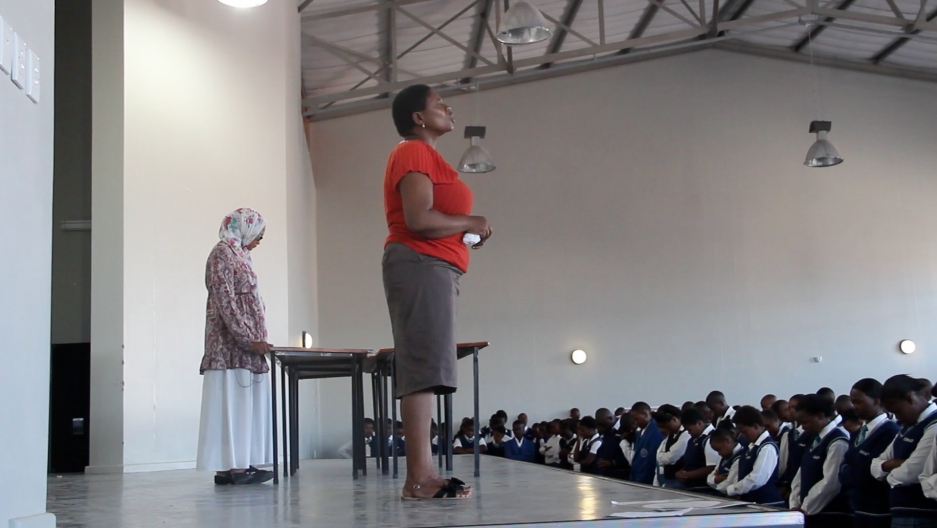 Mrs. Booi, a Xhosa teacher at COSAT, leads the school in prayer.

At COSAT, school assemblies usually begin with a prayer, delivered by a teacher. It’s often given in Xhosa – the first language of most COSAT students.

“I like the prayer,” a tenth-grader named Sinoxolo told me after this morning’s assembly. “It calms me.”

Her friend, Lindokuhle, agreed. “Some of us don’t have the chance to go to church on Sundays, because of homework and chores. So it’s nice to hear prayer at school.”

About 80 percent of South Africans self-identify as Christians. In predominantly black, urban townships like Khayelitsha, the number is even higher. COSAT’s principal, Phadiela Cooper, says there are two kinds of students at the school: Christians, and Christians who don’t practice as much.

By law, South African public schools are not allowed to promote a particular faith. But a school’s governing body – typically made up of parents, community members, and teachers – can approve the inclusion of certain religious practices, including prayers, if it feels those practices are in the school’s best interest.

COSAT’s governing body hasn’t made a formal decision on religious practices. But prayer seems to be a de facto norm.

“I ask the teachers to say a prayer at each assembly,” says Principal Cooper. “It shows the students that we understand they are spiritual beings. And it’s a reminder that they can apply the principles of their faith – like hard work and honesty – to school.”

But Mrs. Cooper also has a more immediate reason for encouraging prayer. She’s Muslim, and she worries what would happen if she didn’t allow prayer at the school. Two years ago, an instructor at COSAT was teaching students Arabic prayers, and sometimes asking them to recite the prayers in class.

“I had to tell the teacher to stop,” Mrs. Cooper said. “I was worried the parents would think we were trying to convert their children to Islam – or trying to incite a jihad,” she said, laughing.

Mrs. Cooper also invites parents to pray at the beginning of parent meetings. She says this gesture breaks down cultural barriers, and helps her gain acceptance in the community.

But not everyone is thrilled about the inclusion of prayer in school. Several teachers have voiced their dissatisfaction.

“I am not a Christian,” said Mrs. Mohammed, an English teacher. “And I don’t think we should do anything that promotes one religion over another.”

A twelfth-grader named Pumela also said she doesn’t care for the school prayer.

“I’m not really religious,” she said, as she stepped out of sight of a teacher. “I just go along with it because I don’t want to feel different.”