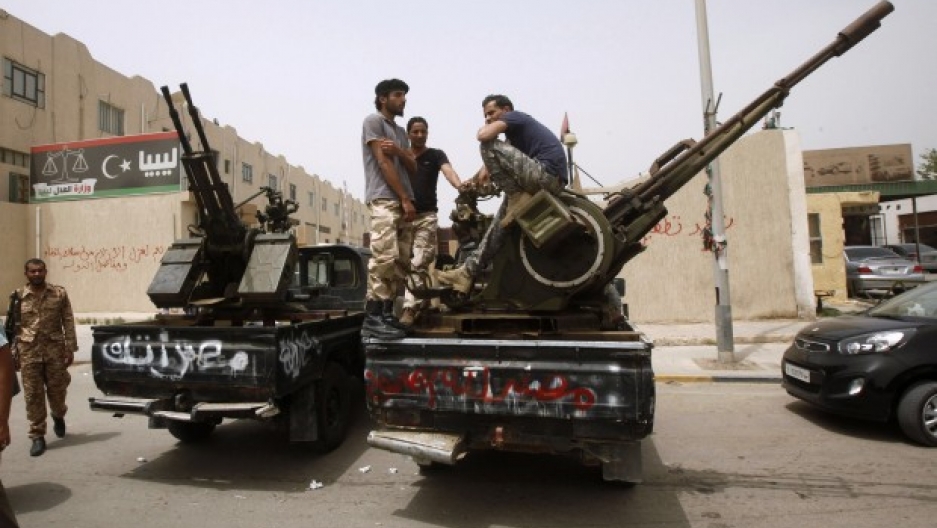 Members of armed revolutionaries stage a protest in front of the Libyan Justice Ministry in Tripoli April 30, 2013. Gunmen in pick-up trucks surrounded Libya's justice ministry Tuesday to step up demands for former aides to deposed dictator Muammar Gaddafi to be barred from senior government posts, Reuters witnesses said. Tension between the government and armed militias has been rising since authorities began a campaign to dislodge the gunmen from strongholds in the capital Tripoli to help curb lawlessness afflicting the oil-producing state since Gaddafi's demise. REUTERS/Ismail Zitouny (LIBYA - Tags: POLITICS CIVIL UNREST) - RTXZ4Q6

Share
Armed groups that helped overturn Libyan dictator Muammar Gaddafi two years ago are pressuring for more regime change. As New York Times correspondent David Kirkpatrick explains to anchor Marco Werman, for several days the gunmen have laid siege to two of the country's biggest government agencies: the Foreign Ministry and the Justice Ministry. The militias are demanding that Gaddafi-era ministers step down. Kirkpatrick says there are channels available to the disaffected groups to participate in Libya's government. He argues that the transitional regime has been too young and frail to incorporate the militia. "You sort of have to roll back and imagine the very first people building government for the first time. That's about what it feels like here in Libya right now," Kirkpatrick says.