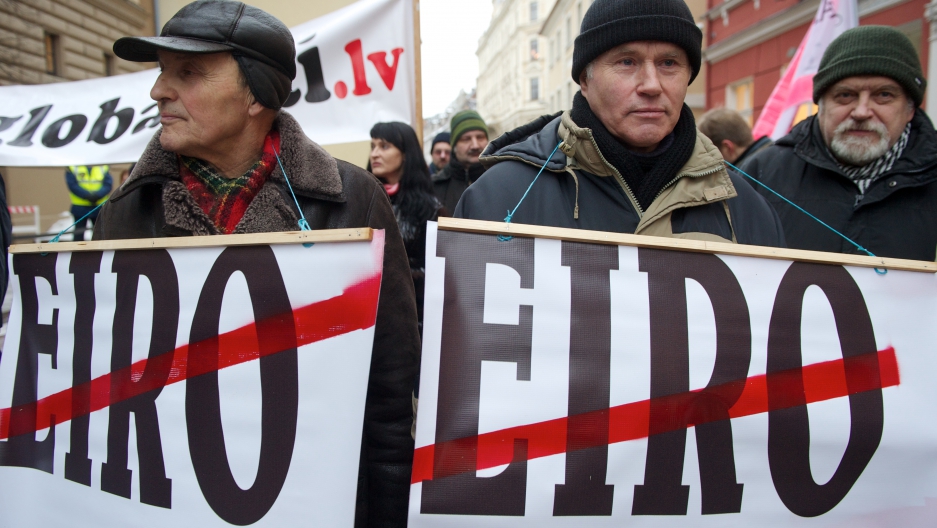 Most Latvians are against adopting the euro despite their government's plans.
Credit: Ilmars Znotins
Share

Sound familiar? But this isn’t Cyprus, whose financial woes unleashed a European political crisis just over a month ago.

An old playground for wealthy Russians, Latvia plans to join the euro zone next year, which has made it one of the newest causes of nervousness among euro zone decision-makers.

Not that you would guess by talking to Latvian officials. The economy is currently growing and the country meets the European Union’s economic criteria for joining the currency zone. Latvian officials say the euro’s benefits for business, the country’s budget and its financial credentials make adopting the single currency a good option.

“We have only heard positive [things] from other countries,” said Dace Kalsone, who oversees Latvia’s possible introduction of the euro at the Latvian Finance Ministry. “It’s been 10 years since we voted to be part of the European Union. And since that time, the euro was our goal.”

But many ordinary Latvians disagree: Only 27 percent favor adopting the single currency, a survey by Latvian pollsters SKDS found in January.

Latvia’s adoption of the euro has its critics abroad, too. The country has a history of huge economic booms and busts, they say. Some are warning that allowing Latvia into the single currency could create new headaches for Brussels.

“If we see another situation like Cyprus and Greece, that’s obviously of concern to the wider euro zone,” said Robert Palmer from Global Witness, a British group that researches financial corruption.

For critics, the similarities are clear. Like Cyprus, Latvia has earned a reputation as a “no-questions-asked” destination for Russian investors on the run from the taxman or the police, anti-corruption activists say.

European governments and institutions have repeatedly admonished the country for its failure to fight money laundering and tax evasion.

In a January report, the European Commission urged Latvia to “pay more attention” to investigating and prosecuting tax dodgers and criminals. The US State Department recently found that official corruption and a large illicit economy made policing money laundering “challenging” for Latvian authorities.

But Latvian financial regulators deny charges the country’s banking sector is being used to hide money of dubious provenance.

“Latvia’s banks go to extraordinary lengths to avoid even the appearance of impropriety [in relation to] all accounts, particularly those from the former Soviet Union,” said Laima Auza, a spokeswomen for Latvia’s Financial and Capital Market Commission.

If true, that would represent a change in the way that the country does business, activists say. Latvia’s banking system is “prone to dubious money from the former Soviet Union,” Global Witness’s Palmer said.

Bankers say that massive quantities of foreign money, much of it from Russia, flowed into Latvia before the global financial crisis. Banks lent on that money with few strings attached, EU studies show. The result was a heady era of booming house prices.

“Before the crisis, there wasn’t sufficient oversight,” said Zsolt Darvas, a researcher at Brussels think tank Bruegel. “That was reflected in major credit and housing booms and all kinds of booms.”

Then came the bust. Demand fell across almost every sector of the economy. Housing prices collapsed. The government was forced to take a majority stake in Latvia’s second-largest bank, Parex, which was almost insolvent.

Parex’s near failure was partly prompted by savers withdrawing their money, US State Department cables dating from the period show.

In November 2008, both “residents and non-residents” emptied out their bank accounts, diplomats wrote. By that point, Latvian regulators were already closely monitoring Parex due to concern over problems stemming from its “high volume of non-resident deposits from Russia,” a cable reads.

Back then, Latvian bankers say, Russians took their money out of Latvian banks and put it into Cypriot accounts. Now they’ve moved their savings back to Latvia.

“It became clear that Cyprus has problems,” said Girts Rungainis, who runs Latvia’s largest investment bank, Prudentia. “It also became clear that Latvia is sailing relatively safely as a result of support from IMF and the European Union and all the austerity reforms.”

The Latvian government had difficulties securing private financing thanks to the Parex bank takeover. So it turned to the European Commission and the International Monetary Fund, which bailed out the government. In return, the country made huge cuts to public spending and downsized government.

Latvia managed to reduce its deficit and begin to grow strongly again. The country’s export businesses are surging ahead and unemployment continues to fall, EU figures show. Latvia is being held up as a model of austerity policy success.

“They [the Latvian government] reformed many things,” a senior European official with first-hand knowledge of the country said. “When the government showed they wanted to be rid of the problem and that they were able to get the tough decisions through parliament, people realized that perhaps there could be an exit from the crisis.”

Nevertheless, Latvia’s government says it will pay money into the euro zone’s bailout fund partly because it “could not say that it [Latvia’s economic collapse] will never happen again,” Kalsone, from the Latvian government’s Euro Project unit, said.

EU officials agree that it’s unclear if the country has overcome its history of large ups and downs.

“It’s a small country that is very exposed to the financial winds, so money coming in and out,” the European official said. “That’s why we try to let the country know that they have to lean against the wind.”

The government has restructured its banking sector in the aftermath of the Parex crisis in an attempt to prevent future banking dramas deriving from hot money.

In addition to forcing banks to increase capital buffers, it has effectively separated banks targeted at foreigners from institutions serving local customers, Auma from Latvia’s Financial and Capital Market Commission said in an email.

And the government says Latvia is no longer “rushing to attract this money” from dubious foreign sources, an EU official said. The European Union has worked to “significantly” improve the Latvian financial sector’s “transparency,” he added.

However, bankers say Russian investors continue to move large quantities of money to Latvia from Cyprus.

“We’ve been recently in touch with one investor who was actively using financial services in Cyprus — he lost a few Mercedes' worth of money, but he can afford it,” Prudentia’s Rungainis said.

“I guess there are people for whom the situation was much more painful,” he added. “But the smart money left Cyprus a long time ago.”