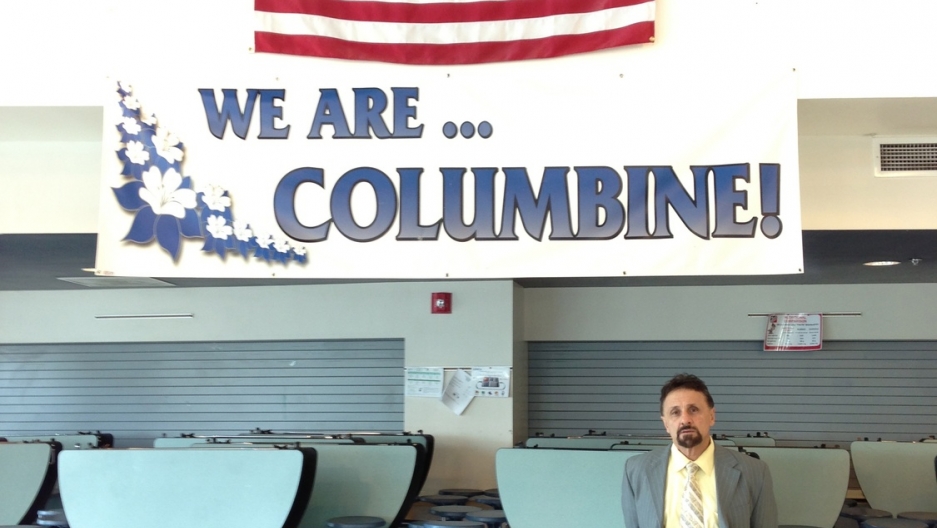 Columbine High School principal Frank DeAngelis helped the school determine how to move on from its shooting, 14 years ago. (Photo by Eric Molinsky.)

When tragedy strikes someplace as sensitive as a school, tough decisions have to be made about what to do with the building.

Should it be destroyed, or made into a memorial to the victims? Or should it be occupied again, and wait for new generations of students to forget what took place?

A task force in Newtown, Conn., has been consulting with architects, design experts, and the community to figure out what to do with the Sandy Hook Elementary School building, and their decision will be announced this month. The designers worked with Virginia Tech, Columbine High School and the movie theater in Aurora, Colo., site of last summer’s Batman shootings, to determine how to overcome the association with tragedies.

Some students at Virginia Tech said they would never set foot in Norris Hall again after the 2007 mass shooting. But tearing down the 70,000 square-foot-building — including offices, classrooms, and unique laboratories and equipment — was unfeasible.

“You couldn’t take a $40 to $50 million resource offline like that,” said Larry Hincker, a university spokesperson.

The administrators reallocated the space so that classrooms would no longer be located there. Then architects thoroughly renovated the 1970s building. The exposed cinderblocks are now covered by warm details like curved wood, earth tone paints and frosted glass.

Families in Littleton, Colo., instead were determined to reoccupy the building with kids and classrooms, remembers Principal Frank DeAngelis.

“We didn’t want the two murderers to win, because they stated in their videos that they would haunt us the rest of their lives,” he said.

In the key alteration to the building, the floor of the library — the location of many of the killings — was completely removed, creating a two-story space above the cafeteria. Geometric sculptures representing the victims are suspended from the ceiling, surrounded by a painting of Aspen trees.

“One of the parents, Dawn Anna, said ‘We were afraid that people would walk in there with their heads down and be really sad to be in here. But you can't help but look up,’” DeAngelis said.

DeAngelis has consulted with other schools where killings have taken place, including Sandy Hook.

“When I met with the teachers ... I told them, it’s a marathon, not a sprint," he said. "I can assure you now as I’m standing here, there is hope. Here we are, approaching fourteen years, and Columbine’s doing all right.”