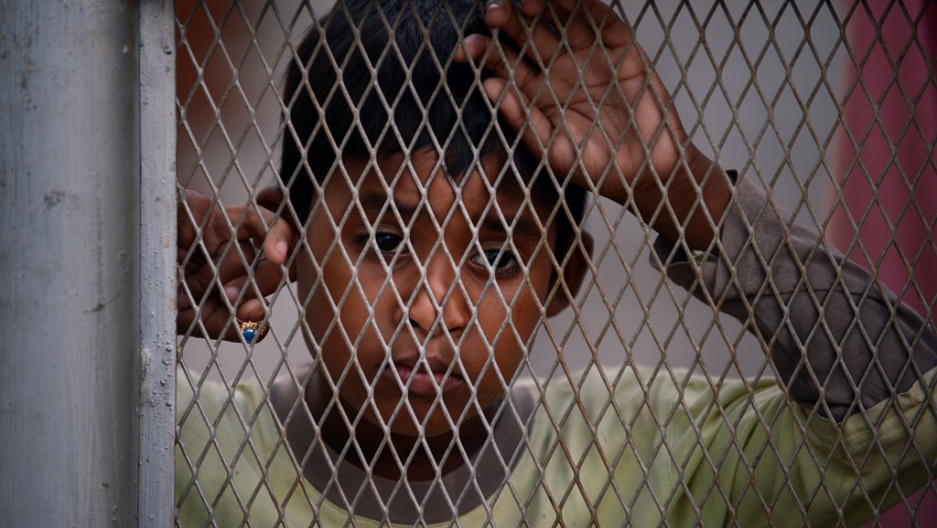 In this photograph taken on April 8, 2013, a young Myanmar Muslim Rohingya refugee looks on behind a wired fence at Indonesia's Belawan immigration detention center in Medan city located on Sumatra island, where eight Myanmar Buddhist detainees were killed by Myanmar Muslim Rohingya refugees inside the detention center on April 5, 2013. Some 200 asylum seekers, from countries including Sri Lanka and Afghanistan as well as Myanmar, remain at the detention center in the port town of Belawan, with some rooms holding large groups. They have been badly shaken by the killings.
Credit: Romeo Gacad
Share

Factions within the global hacker collective Anonymous are preparing to launch a digital campaign in support of the Rohingya – Myanmar’s Muslim minority – who potentially face what a Human Rights Watch report last month classified as “ethnic cleansing.”

“Currently we are keeping an eye on the situation making sure the... violence against the Rohingya does [not] spin into another massacre again,” one of the managers of the Anonymous-aligned Twitter account, @CIApressoffice, told GlobalPost. “Our targets will include those who turn a blind eye or actively allow this tyranny to continue.”

More than just a group of hackers in search of lulz and glory, those involved in OpRohingya are taking their cues from Rohingya community leaders on the ground, who relay reports to Anonymous through established internet activists such as Heather Marsh.

Some activists involved in the operation want to push up the June launch date as crackdowns force Rohingya community leaders further underground.

“What we do know is, yes, the Rohingya are asking for assistance and an end to the violence being bestowed upon them and their children,” the @CIApressoffice contributor told GlobalPost.

Prominent netizens and supporters of Anonymous organized a Twitter storm in March to raise awareness about violence against Rohingya communities and to pressure Myanmar’s government to protect those facing harm and displacement.

In spite of greater visibility in the West, however, the conflict between Myanmar's Buddhist majority and the Rohingya Muslims continued throughout the country, forcing many Rohingya to leave their homes amid growing threats of violence.

“It really is a tragedy on many levels,” said the @CIApressoffice contributor. “[First] and foremost the Rohingya are facing certain death and the world (at least before this operation) was completely unaware of their existence. Anonymous thus decided to use its current popularity within the public to give voice to the voiceless.”

The "Anons" (as members of the collective are known) behind OpRohingya plan to target those they deem to be guilty of, or apathetic about, what they consider to be ethnic cleansing of Myanmar’s Muslim minority.

More from GlobalPost: Suu Kyi spokesman: “There is no Rohingya”

Those targets may include Myanmar’s most prominent and widely beloved political figure, Aung San Suu Skyi.

Suu Kyi, a Nobel Peace Laureate, was long lauded for her democratic struggle against the oppressive military junta that ruled Myanmar for over five decades. However, she is now facing criticism for her failure to help resolve the conflict between the country’s Buddhist majority and Muslim minority.

“She believes, in Burma, there is no Rohingya ethnic group. It is a made-up name of the Bengali. So she can’t say anything about Rohingya. But there is international pressure for her to speak about Rohingya. It’s a problem,” Suu Kyi’s spokesman Nyan Win told Patrick Winn, GlobalPost’s senior correspondent in Southeast Asia.

Some Anons who spoke to GlobalPost pointed out that the Rohingya are threatened on two fronts: by anti-Muslim mobs and by a government complicit in the violence against Muslims.

“The Rohingya people are under [the] oppression of their government and local people,” said one Anon, affiliated with the Anonymous-linked account @Crypt0nymous. “It was clear that this is a humanitarian crisis like the one facing the people of Gaza, the West Bank/Israel, Kashmir and Gabon.”