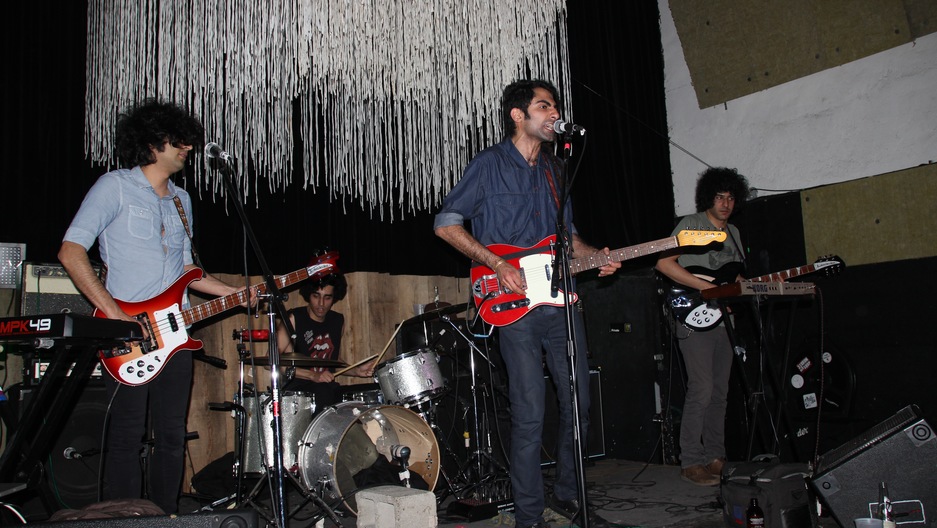 The Yellow Dogs at Cameo Gallery in Brooklyn. From left to right: Koory, Arash, Obaash, and Looloosh. (Photo: Bruce Wallace)

In the video for The Yellow Dogs song "Dance Floor," three women walk, run, and dance their way through New York City.

They party on the grand, stone lions in front of the main public library, cartwheel through Times Square, and hang upside down in a subway car.

They're laughing the whole time.

They get onlookers laughing, too.

If you know a bit of the story of The Yellow Dogs–how they played underground shows in Tehran because it was impossible to rock out in the open, and how they decided to flee Iran a few years ago–it's tempting to see the video as a joyful political statement about freedom,—maybe about women's rights too.

Part of playing this music for the world is writing lyrics in English instead of Farsi. That surprises some people, too.

"They have expectation from us," Obaash says, laughing ruefully. "But mostly Iranians, Iranians that live in America. They get shocked, they're like 'Dude, like, why you guys don't sing in Farsi!?' I'll do whatever the f—k I want, that's why I moved here."

The band moved to the US in early 2010. Things had gotten hairy after they were featured in the film "No One Knows about Persian Cats."

The film tells a kind-of fictional story about young musicians trying to get by in Tehran—"kind of" because it features actual musicians in Tehran in fairly true-to-life scenarios. In their scene, the two main musicians in the film go to visit The Yellow Dogs at their rooftop practice space.

The film was eye-opening for a lot of people, including hardliners in the Iranian government. "The government didn't know that there's a band like us; we threw concerts with our friends–like they didn't know about that. And that's extremely illegal to do that without a permission," Obaash explains. "The movie won a Cannes prize and exploded, and after that we thought, 'Yeah, it's time to get the hell out of here.'"

The Yellow Dogs first came to the US on artist visas–they'd been invited to play at the South by Southwest and CMJ festivals. A year later three of the four were granted asylum; the drummer Arash's case is still pending.

Now they're living the dream: Sharing an apartment with a handful of other Iranian expat artists in the part of Brooklyn where all the young bands live.

The band wrote their song "This City" for their adopted hometown.

"You want to be great engineer, you want to go to NASA from Iran, you study hard try apply Harvard, Stanford. You want to go to that place where you can make progress," Obaash says. "New York City and the scene here was our Harvard University."

They've also gotten to tour the US a couple times and play serious venues with some of their favorite bands. "We are from Iran," Obaash says. "I always say if we were born and raised in America, or born and raised in a Western country anywhere, we wouldn't appreciate it as much as we do right now to come from a country like Iran and be able to come out here and be able to see like, wow, we used to make our own venue to be able to play music."

The Yellow Dogs played recently at the Cameo Gallery, the Brooklyn club where they played their first US show three years ago. They closed their set with "This City". The women from the video were in the front row the whole time, dancing like crazy.