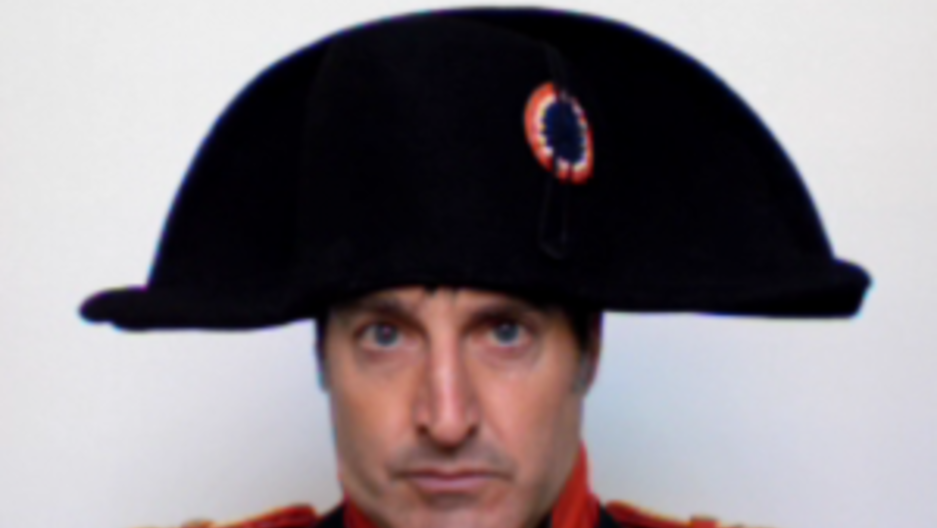 Each summer, on some unassuming farmland not far from Brussels, Belgium, an epic battle occurs. Re-enactors stage The Battle of Waterloo. Thousands gather to act out, and watch, Napoleon’s defeat at the hands of Wellington.

It’s a big deal. But in 2015, the re-enactment will be an even bigger deal, as it will be the 200th anniversary of the real battle. And that means there’s a lot of pressure to choose the right man to play Napoleon.

One of the top candidates for the job sits down with me for our Skype interview. Or, I should say, Napoleon Bonaparte himself sits down.

“Je suis Napoleon Bonaparte,” Mark Schneider says, completely and utterly in character. He goes on to remind me that he’s “the Emperor of France, the King of Italy, etc. etc.”

It’s remarkably believable. Schneider looks like Napoleon, complete with the hat, the medals and the ‘I’m going to mop the battlefield with you’ stare.

Then he breaks character with a smile, and says: “I don’t really believe I’m Napoleon, I assure you.”

Whew. Scratch the Napoleon Complex thing. But I have to say that if I were choosing Napoleon for Waterloo in 2015, Schneider would definitely get the nod.

“I jokingly say I’ve been preparing for this role my whole life,” says Schneider. “My mother is French and my father is American, so I had a connection with France.”

“When I was about 2-years-old, I received some toy soldiers from a French cousin who had come to the US for a visit. It was Napoleon and several of his imperial guardsmen. And as my mother says, ‘The rest is history.’”

Growing up, Schneider didn’t have Superman or Batman posters on his walls. He had a picture of Napoleon. He liked to dress up as a French soldier, and act out famous battles.

Schneider served in the US Army during the 1990s.

After he left the service, an Army buddy asked him to join a Napoleonic Era cavalry re-enactment group here in US.

A year later, Schneider says, the group needed someone to play Napoleon.

Schneider started getting gigs playing Napoleon in documentaries for the History Channel.

Then, in 2005, the Waterloo Committee — the group that organizes the yearly re-enactment in Belgium — got in touch.

“They requested that I come to Europe to portray Napoleon for the Battle of Waterloo. I couldn’t believe it. It was a dream come true,” Schneider says. “I sent them a résumé, and some pictures, and they said, ‘Okay, come on over.’ And so my first European event as Napoleon was at Waterloo.”

Take a quick spin through YouTube and you can watch Schneider ride through the Brandenburg Gate in Berlin to the delight of his “troops.”

Here he is again, at a re-enactment of the Battle of Borodino outside Moscow, brandishing a sword amid the gunfire…

Schneider concedes that — despite his experience — some in Europe might balk at handing an American the reins for the 200th anniversary of Waterloo.

But then again, he says, remember Napoleon’s own background.

“He’s certainly a Frenchman, but he’s from the island of Corsica. His first language was Italian.” Schneider even puts on a Corsican accent when he plays the role.

But he’s got serious competition.

An actual Frenchman, and a Belgian are vying for the Waterloo role in 2015.

“Speaking for myself, I would love to do it,” he says. “If I’m not selected, that’s okay too. I’ve had a wonderful run as Napoleon. Not that I’m giving up. I certainly would like to be selected, but I’m sure we’ll all be able to do a great job of bringing history to life.”

I ask Schneider, who has a day job as an actor at Colonial Williamsburg, to give me his favorite Napoleon speech. With a Gallic sniff, he signs off with the one Napoleon rallied his troops with on the eve of the Battle of Austerlitz.