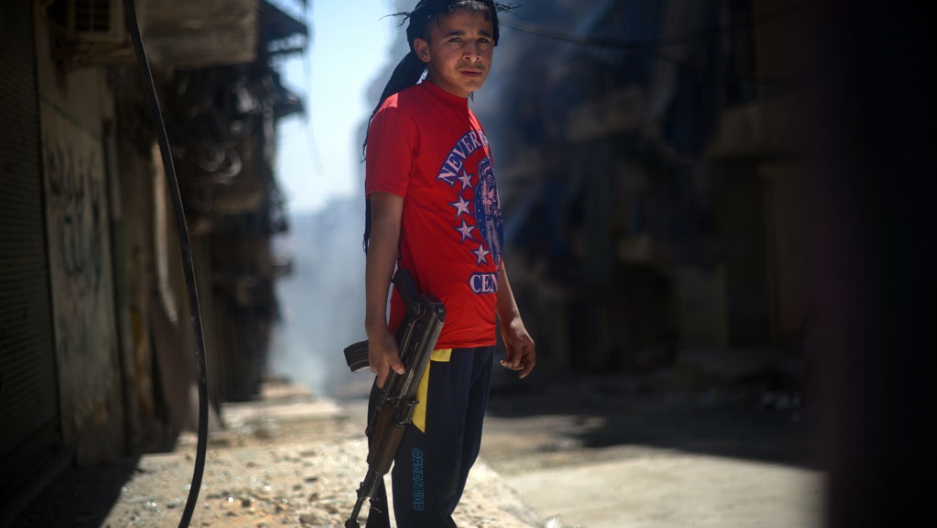 A Syrian boy holds an AK-47 assault rifle in the majority-Kurdish Sheikh Maqsud district of the northern Syrian city of Aleppo. US intelligence agencies determined with "some degree of varying confidence" that chemical weapons have been used in Syria as of April 25, 2013.
Credit: DIMITAR DILKOFF
Share

Medics tested the blood samples — which were taken from some 13 victims of an attack that included white powder in the northern village of Saraqeb on April 29 — at the Reyhanli hospital on the same day, but did not find anything unusual, they said.

They tested the blood specifically for sarin gas — a nerve agent — and also ran regular bloodwork.

The samples from the victims, who suffered from dizziness, vomiting and respiratory difficulties, have since been sent to the Turkish capital, Ankara, for further testing.

The development comes as Israeli fighter jets are reported to have carried out at least several airstrikes on weapons convoys near Damascus over the weekend.

Employees at the Istanbul headquarters of the Council of Forensic Medicine, the institute testing the blood in Ankara, were unable to answer GlobalPost inquiries on the status of the additional tests.

Doctors in Reyhanli, in Turkey’s Hatay province, say they believe the Turkish government will keep the final results a secret due to the potential global political consequences of either negative or positive results.

US President Barack Obama had previously said chemical weapons use in the now two-year-long civil war would be a “red line”, and potentially provoke a US-led intervention against the government forces of Syrian president Bashar al Assad.

Both Israeli and US officials have in recent weeks said they believe that chemical weapons, including sarin gas, have been used in the fighting in Syria but it is unclear in what capacity and from where the chemicals originated.

But while some Syrians say chemical weapons have been used on civilian neighborhoods in several locations throughout the country, they remain difficult to identify.

"The symptoms were consistent with those caused by a chemical, and the effects of this chemical were very serious and potentially fatal,” said Dr. Ubada Alabrash, who treated the victims at Reyhanli hospital. “But we couldn’t identify what the chemical was.”

In Saraqeb and in an earlier attack on April 13 where white powder was dispersed in a Kurdish suburb of Aleppo, the civilian victims were displaying similar symptoms: dizziness, vomiting, headaches and breathing problems.

Also, based on photos and videos uploaded to YouTube — and catalogued by independent blogger and weapons monitor, Eliot Higgins — the spent munitions or canisters witnesses said disseminated the chemicals appeared to be virtually identical.

“It appears to be a very strong match to the remnants of devices that were supposedly used in an earlier attack in Sheikh Maghsoud, Aleppo,” Higgins writes of the canisters left behind in Saraqeb on his blog, “Brown Moses.” His work tracking and identifying weapons used in the Syrian conflict is cited widely by both rights groups and international media.

“This leads me to believe the same devices and chemical were used in both attacks,” he writes.

However, both weapons and medical experts are urging caution.

While three people were killed in the attack in Aleppo and another person died from the attack on Saraqeb, the majority of victims recovered after just several days.

In Aleppo, the doctors who treated the patients also later suffered similar symptoms to the victims. In Reyahanli, the medics reportedly wore protective suits.

“My effects were mild, but one doctor had to be admitted to the ICU,” said Dr. Kawa Hassan of the Avreen Hospital that admitted the 22 victims of the attack in Aleppo.

When the patients began to arrive on April 13, Dr. Hassan said he was scared not only for himself but for the entire country.

“If he begins a chemical war, he will kill us all,” he said.