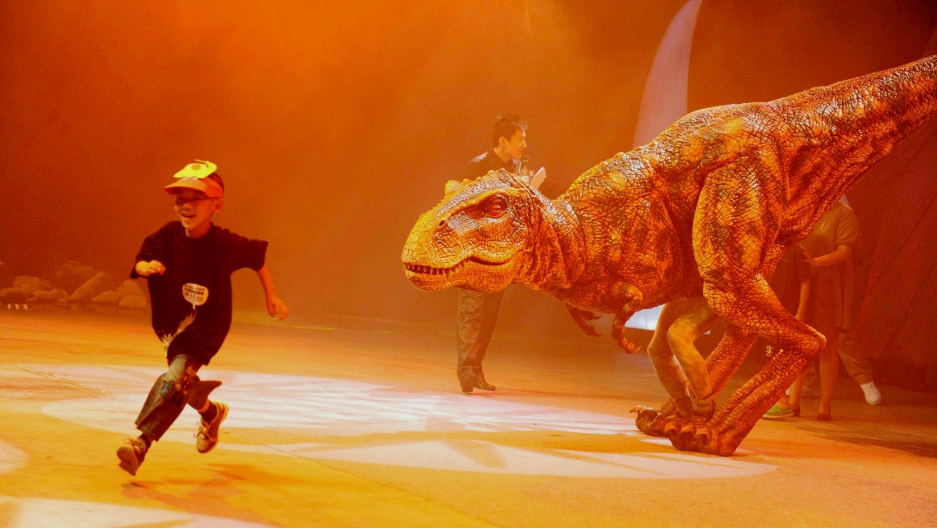 A Chinese boy takes part in an artificial dinosaur show presented by performers in Beijing on July 30, 2010. American biologists found the 'Dragon King' dinosaur fossil in northwest China in 2006. It was recently declared a new species of theropod.
Credit: AFP
Share

An international team of researchers, including participants from South Africa and the United States, said that a fossil uncovered in China's Xinjiang region in 2006 is in fact a new species.

The meat-eating theropod has been named "Auron Zhaoi," or "Dragon King," after the dragon king in famous Chinese classical literary work "Journey to the West."

The Dragon King lived about 161 million years ago during the Late Jurassic Period, and judging from its sharp teeth, is likely to have eaten meat like small mammals and lizards.

The team first discovered the leg and with more excavating discovered a partial skeleton, along with some teeth.

From the look of the skull, jaw and skeleton, the dinosaur was about 3 feet long and weighed about 3 pounds.

But researchers said they believed they had found the fossils of a baby, and didn't think the whole species was that small.

"We were able to look at microscopic details of Aurun's bones and they showed that the animal was less than a year old when it died on the banks of a stream," co-researcher Jonah Choiniere said.

The finding was published in the Journal of Systematic Palaeontology.

South Africa's University of the Witwatersrand, which participated on the research team, has become known for its expertise in the paleo-sciences thanks to major discoveries such as the "Little Foot" hominin skeleton at the Cradle of Humankind, a World Heritage site about an hour from Johannesburg.