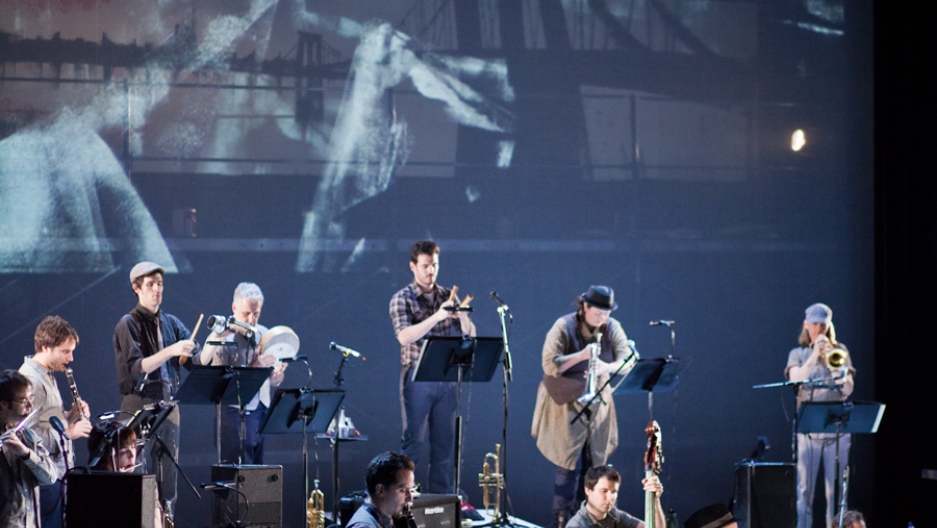 Darcy James Argue’s new album Brooklyn Babylon is one of the most anticipated jazz albums of the year.

But Argue wondered if he should even record it.

"I thought long and hard whether this would work as a record,” he said, pointing out that Brooklyn Babylon was originally a score — the music for a multimedia epic that incorporated projected images and live action performance, created in collaboration with graphic novelist Danijel Zezelj.

“I had enough hubris to figure I could get away with it as well,” he said.

Argue’s band, the Secret Society, blends the big band tradition that dates back to Duke Ellington, heavy on the brass, with all kinds of influences: minimalism, pop, Eastern European music and guitar noise. Argue says for this record, the music of the '70s was a particular touchstone.

Growing up in Vancouver, he only knew New York through the music coming out it: works by Steven Reich, Thad Jones, Mel Lewis and Donald Byrd.

“For me, those sounds were what New York might be like. So my mythology of Brooklyn includes that warm analog vinyl '70s sound,” Argue said.

Writing the music for, and running, a big band is a challenge few jazz musicians seem willing to undertake. Argue wouldn’t have it any other way.

“It’s just awesome to stand in front of a group of 18 musicians and be hit with this wall of air, it’s a total sensory overload,” he said.

“I have a lot of musicians who will substitute in rehearsal and afterward say, ‘I’ve listened to your music, but I had no idea it was so hard,’” he recalled.

Argue takes it as a compliment, usually.

“There are times after the third hour of rehearsal where I feel like, ‘I gotta figure out a way to write easier music,’” he said.